I won't shop on Thanksgiving

I don't blame corporations for the consumer forces that warped our national holiday. I blame us 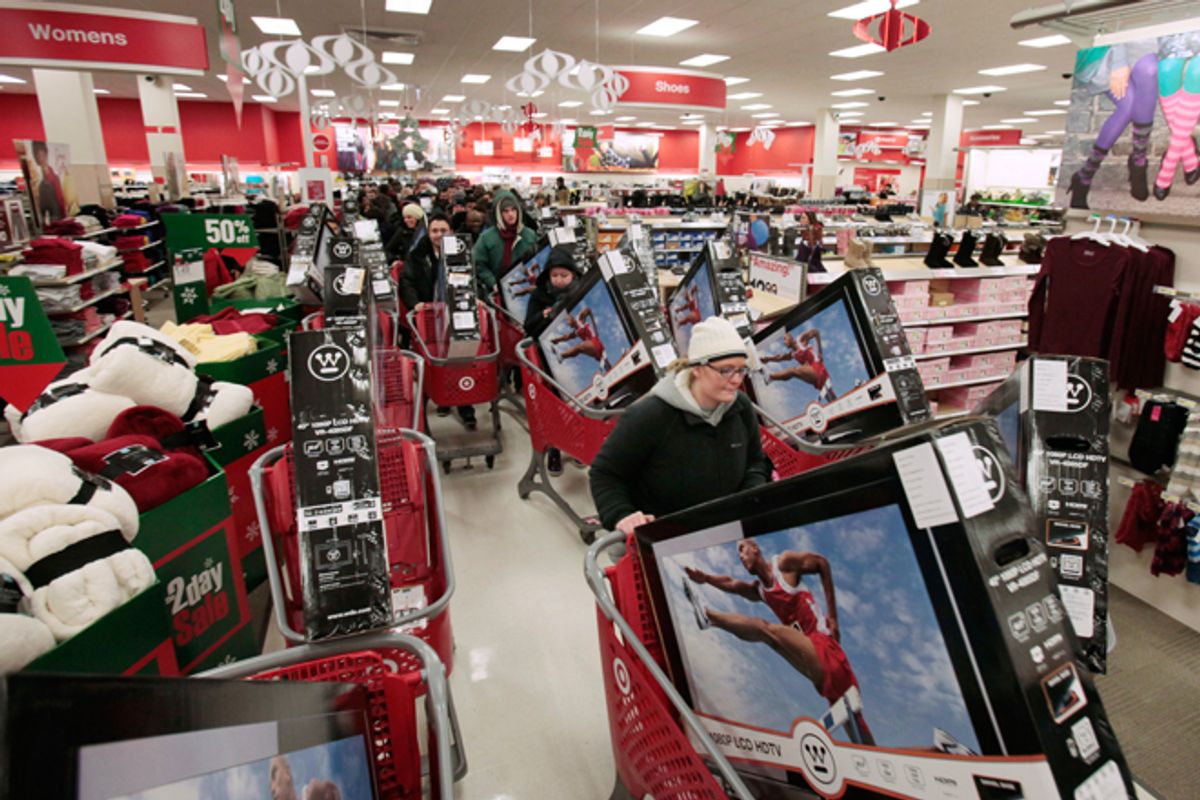 Last week, I had a conversation with a student at the upstate New York college where I teach. She’s a retail employee who would be working an eight-hour shift on Thanksgiving, not be spending dinnertime with her 4-year-old son and the rest of her clan.

What would she do? I asked. Would the family wait dinner for her?

And I was so angry on her behalf. But she needed her job, and she couldn't say no without the risk of being fired, and so a mother who should have been spending time with her child on our most family-friendly day was shipping off to help sell cheap flat-screen televisions to the masses.

Thanksgiving used to be a time to be grateful for what you already had. Back when George Washington declared it a national holiday, almost all work came to a stop. I’m still moved by Norman Rockwell’s Saturday Evening Post cover, depicting a family's simple joy. The painting was called “Freedom From Want.”

The Thanksgiving I grew up with was a day of traditions: of recipes passed down through generations, of afternoon naps or flag football games played after gorging on autumn's bounty. Football games on television, stories told into the night. It's a day we take care of one another: People donate more generously to soup kitchens, reach out to old friends, share the holiday with someone who might otherwise be alone. My parents were immigrants who came to this country in the 1960s, but they made sure we knew how special the day was.

I'm an atheist and observe Christmas as a secular holiday, divorced from its Christian origins. But Thanksgiving is who we are as Americans, regardless of creed. When I arrived here from England as a little girl, it was a new holiday, and participating in it meant you were a citizen of this nation.

And so it is that much more dispiriting to see the holiday warped into a kind of mad consumer grab. “Black Friday” (which has now been pushed back to Thursday by itchy retailers) has become a national rallying cry: Spend more, save businesses, make your family happy. Everyone wins! And meanwhile, we ruin a whole class of workers' Thanksgiving so we can save $10 on a piece of plastic crap, or bring home yet another piece of technology that we think will make our lives easier.

So consider this my stand for family values. Those aren’t really conservative values, you know. Because terrible things happen during these shopping sprees. Out-of-control mobs of frenzied shoppers can stampede into a Wal-Mart, leaving one worker dead and four injured.  But each year the pressure to sell, to strap down employees for the full day, to grab hold of the wallets of those frenzied shoppers, becomes more intense.

This year, Target has gotten in on the Black Friday creep. Apparently no one in the management sees the dark irony in prominently posting the company’s goals on the website, which includes "help[ing] Target team members and their families live healthy, balanced lives." How does that square with making your workers give up their family holiday to cater to herds of shoppers?

Yes. I said "herd." Because it is our own greed and shallow quest for things that have made the corporate decisions to stay open on Thanksgiving tenable. While I hold Kmart, Wal-Mart, and Target accountable for their horrendous decisions to encourage Christmas shopping on Thanksgiving Day, I hold us — the American consumer — responsible for buying into it.

Which is why I've refused to shop on “Black Friday and Thursday."  I don’t want to be part of the dehumanizing forces that show just how thoroughly we have run off track. We have allowed the Thanksgiving holiday, like everything else in this culture, to be bought. We did this.

I don’t want any part of a system that places bucks before family. I don’t want to be in a crowd of pushing and shoving. This isn’t Thanksgiving. It’s Thanks-taking. Taking time away from employees' loved ones. Taking the anesthesia of consumer goods that make us believe we are living better lives: the Xboxes and the plastic doodads and the toys we’re so grateful for when we find them under the tree.