Forced marriage in our own backyard

New research reveals that it's no longer exclusive to Asia and Africa -- and that it's on the rise in the U.S. 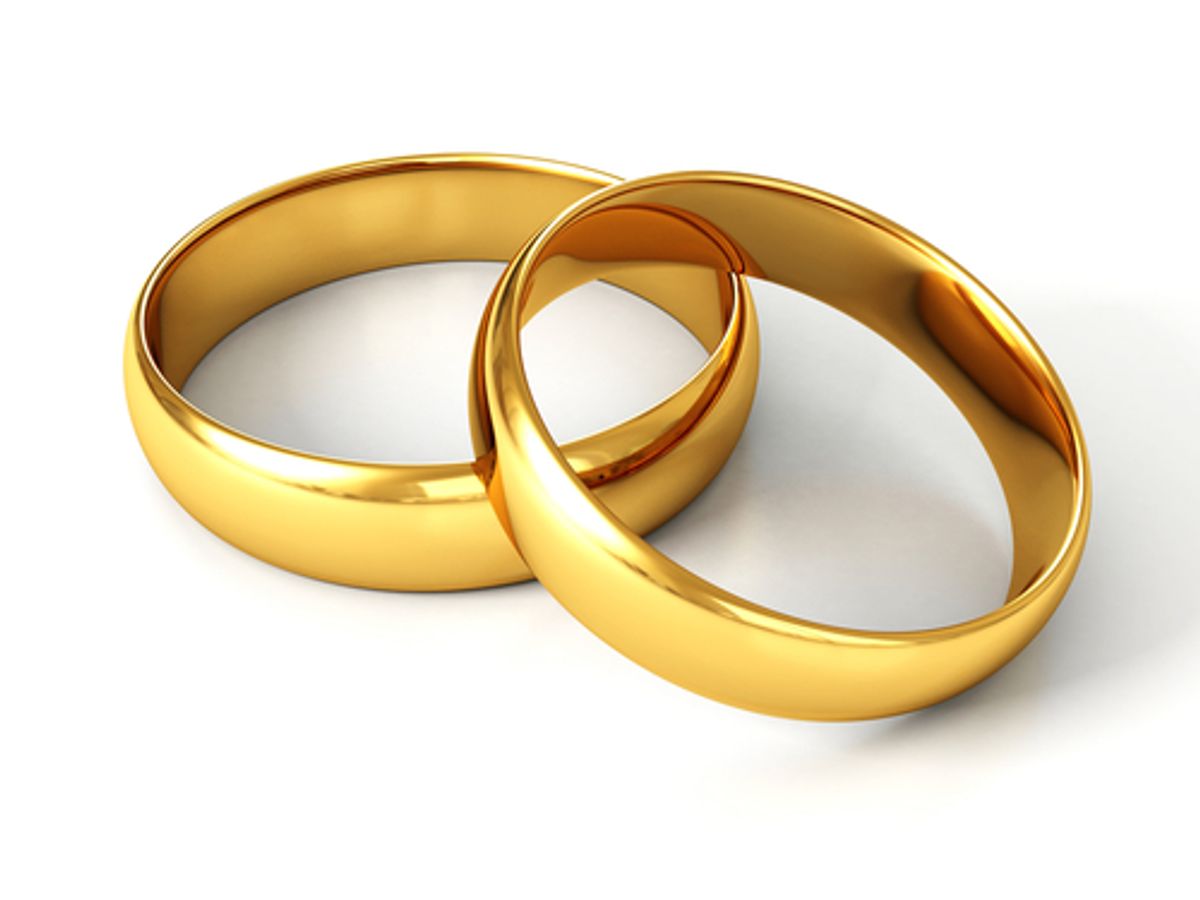 This piece originally appeared on Trust.org.

NEW YORK (TrustLaw) - To many in the United States, forced marriage sounds like an ancient and alien practice, something that might happen in remote corners of India or Pakistan, not in the heart of 21st century America.

But it is indeed occurring in the United States, and “it is a growing problem,” according to Manon DeFelice, executive director of the New York-based AHA Foundation, which protects and defends the rights of women and girls in the West from oppression committed in the name of religion and culture.

Hidden behind the closed doors of urban apartments and suburban houses around the country, hundreds of girls and women are believed to be forced into marriage every year, often too frightened to protest and coerced in ways difficult for authorities to detect.

For some girls nearing high school graduation, the summer school holidays are the most dangerous time of the year. A young woman is sent to visit relatives in her ancestral homeland and arrives to find not only that she’s been engaged to a man she’s never met, but that she is expected to sponsor a U.S. visa for him.

Another young woman is told that if she marries the man chosen by her parents, her ailing father’s health will improve, but if she refuses he’ll likely die of a heart attack.

Ensnared through familial deception, cultural tradition, emotional blackmail, and threats of physical violence and even death, women and girls like these are all victims of forced marriage. Often American citizens and the daughters of U.S. citizens or parents with legal immigrant status, they tend to be under 18 but can be of any age.

“I think Americans are completely unaware of forced marriage happening on our soil.  We have a mythology about freedom and believe it applies to everyone here,” said Layli Miller-Munro, executive director of the Tahirih Justice Center in suburban Virginia, a nonprofit legal defense organisation which works on forced marriage and other human rights abuses affecting girls and women primarily from immigrant communities.

“It is far more common than we realise and more Americans come into contact with it than they realise,” she told TrustLaw in an interview.

Data remains scarce. Tahirih launched a Forced Marriage Initiative and conducted what is believed to be the first nationalsurvey on the issue in 2011. It elicited responses from over 500 non-profit, governmental and for-profit agencies working with various immigrant, ethnic and religious communities in 47 states and the territory of Guam.

Respondents identified as many as 3,000 known and suspected cases of forced marriage in just the last two years involving women from 56 different countries and diverse faiths, though many involved Muslim families.

Tahirih said data is difficult to obtain because victims are often reluctant to disclose forced marriage or ask for help.  Reasons include reluctance to get their parents into trouble; fear of retaliation from their parents; ostracism in their community; resignation to the situation or ignorance of their rights under U.S. law.

Sixty-seven percent of the respondents felt there are cases of forced marriage in their communities which are not being identified, “indicating there is a potentially large hidden population of individuals at risk,” the report said.

“We don’t know the real scope, but we know this is just the tip of the iceberg,” said Ayaan Hirsi Ali. A Somali-born victim of forced marriage, former member of the Dutch parliament and founder of the AHA Foundation, she spoke recently in New York at the foundation’s Second Annual Conference on Honor Violence and Forced Marriage.

Nazir Afzal, who is chief crown prosecutor for the northwest of the United Kingdom, a leader in bringing prosecutions against honor violence and forced marriage and a force behind proposed UK legislation to criminalise forced marriage,  agreed.

“We know we have 8,000 to 10,000 forced marriages in the UK (annually). If we, who are one-sixth of your size, have 8,000 to 10,000 we know about, what’s the picture here?” said Afzal at the AHA conference, which was well attended by law enforcement agencies eager to learn more about identifying and prosecuting forced marriage and the honour violence that often accompanies it.

Among the problems confronting agencies wanting to help those facing forced marriage are:  confusion over the difference between arranged and forced marriage;  reluctance to appear culturally insensitive; and the potentially dangerous  tendency of law enforcement and child protection agencies to believe that returning a woman or girl to her family is usually in her best interest, according to Tahirih and other experts .

Unlike the UK, which Afzal estimates is about 10 years ahead of the U.S. on this issue, there are no Forced Marriage Units or hotlines offering help in the U.S., though AHA plans to launch a hotline in 2013. There is no federal law in the U.S. against forced marriage. Only nine U.S. states and territories have laws against the practice, and Tahirih found no prosecutions brought under these laws.

Existing laws can be used to help women and girls resist or escape from forced marriages, said Heather Heiman, senior public policy attorney at Tahirih, which handles cases in its region and refers others to members of its National Network to Prevent Forced Marriage.

A U.S. citizen’s best chance of preventing or escaping a forced marriage is to resist leaving the United States, Heiman said.  Once overseas, the U.S. State Department can offer help if a victim can contact the nearest embassy or consulate, but that can be difficult for people in remote areas or under close family supervision.

The motives behind forced marriage in the U.S. are complex but essentially parallel those behind the practice in Asia and Africa. Parents often believe forced marriage preserves the virtue of their daughters, protects the honour of the family and sometimes provides economic benefits.

Vidya Sri was born in India, came to the U.S. as a toddler and grew up in suburban Long Island. Her own parents had defied arranged marriages and eloped, but her father had a different plan for Vidya, she said.

He sent her back to India, where at 22 relatives introduced her to an accountant from New York 9 years her senior.  One week later they were married in Madras.

After 18 years of marriage, the birth of two children and a depression that led to alcoholism and a suicide attempt, Sri, who had become a successful banker, said she took her children and divorced her husband in 2010 – though she noted her husband never abused her and did not know she had been forced into the marriage.

She founded Gangashakti, one of the first support and resource groups for women trapped in or threatened by forced marriage.  “…just like I had…they were all hiding in plain sight and I felt compelled to find them…and become a source of strength for all these tortured women who were looking for a way out,” she told TrustLaw.

Most but not all forced marriages in the United States occur in immigrant communities.

Fraidy Reiss grew up in a poor family in the Ultra-Orthodox Jewish community in New York City, where girls and boys never mix or date before marriage, and her parents were divorced. “I was by no means a catch,” she told TrustLaw, describing why she felt she had little choice but to marry a man matchmakers found for her when she was 19.

They wed six weeks after they met. A week later, she knew the marriage was a mistake but saw no way out. Defying tradition, she eventually took off her Orthodox wig, earned a college degree at 32, found a good job as a private investigator and weathered ostracism from her family when she divorced her husband in 2010.

“That’s when I said it’s time to start helping other women.  Nobody should have to go through that alone the way I did,” said Reiss, 37, who founded Unchained at Last, a New Jersey-based nonprofit dedicated to helping women escape from marriages like hers.

Lisa Anderson is a journalist with the Thomson Reuters Foundation, the philanthropic arm of Reuters and organizers of the TrustWomen conference along with the International Herald Tribune.