Never show them your back

I hid those moles, because they were hideous. But the worst part of your body can look different to someone else 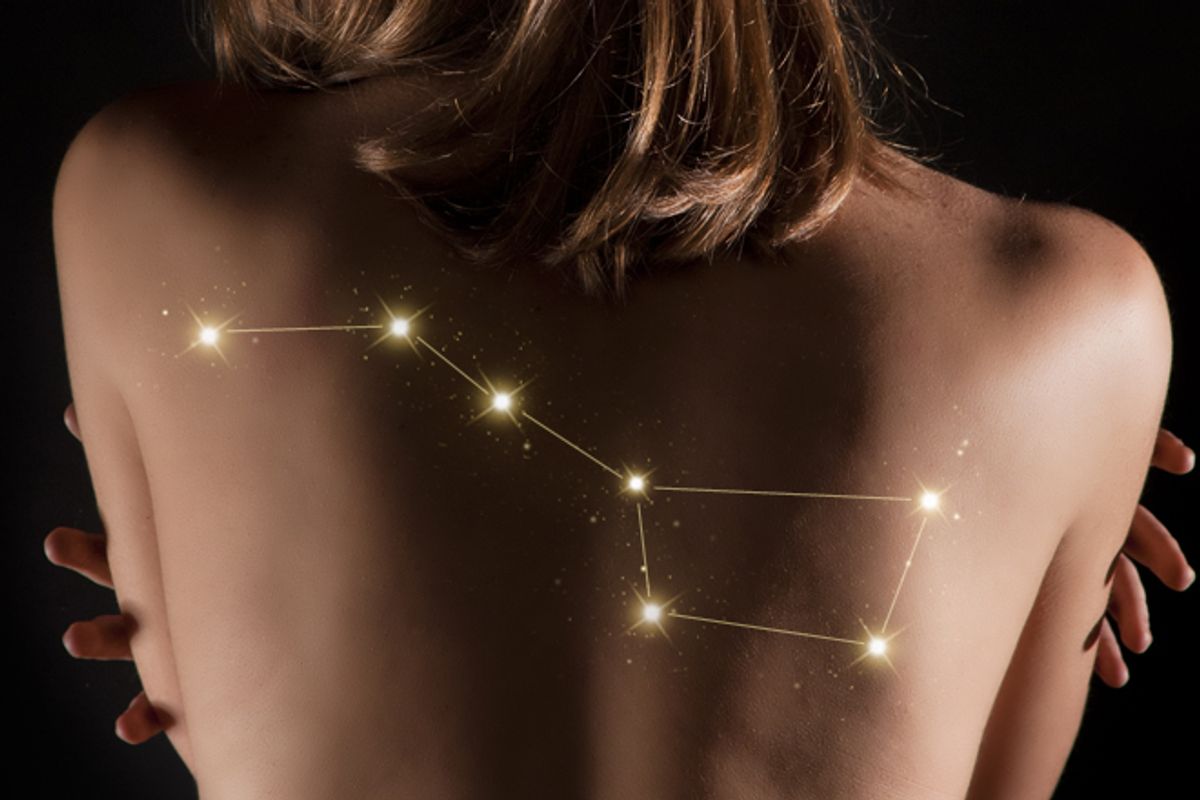 This is the first installment in "Body Issues," a series of personal essays about obsessions with our own bodies.

I used to flash my bra when I was good and drunk. I didn’t really care. It’s funny how this happens, how some part of your body considered “secret” and “scintillating” just feels like more skin. But my boobs arrived early, and grabbed second helpings on their plate, and so men would saunter up to me with that greedy look: Can I touch? When? Now? Eventually, it got easier not to care. Here, have at it, America: My tits.

But when I flashed my boobs, I kept the back of my shirt down. I did not raise it up entirely, not even when I was zombie-eyed and slipping off bar stools, because to do so would have been to reveal the part of myself that was seriously hidden, raw and vulnerable. It would have been to show you the moles on my back.

I was 7, maybe 8, when I discovered my back did not look like other people’s. Nothing dramatic: Black buckshot on a white canvas. But those things were like hideous scars to me.

I remember the anxiety of a bathing suit, how I walked to the diving board with my head raised skyward, hoping my wet hair would drape down my back and provide cover. It’s so poignant how a person can make themselves more conspicuous just trying to hide. Tugging at the skirt that’s too tight. Hands fluttering to the blemish on the chin. I’m not sure who would have noticed those moles on my back, but I’m pretty sure passersby wondered why that kid kept walking around with her head turned up. What was she looking at? What did she see up there?

The moles were not inherently interesting, but they contained dark magic. I believed that if you saw those moles, you might change the way you felt about me. Later I would hide other things: A period that came early, beer cans under a bed, the boobs, of course, though good luck with that. But the secrecy started with the moles. I told no one. Not my beloved older cousin, a foxy tomboy who rambled through the world in torn jeans, and not my mother, who tucked me in bed at night and stroked my hair and told me I was beautiful and perfect. And I thought: That’s a very nice lie that mothers have to tell.

I searched other women’s bodies. On the daytime soaps I had started watching over bored summers, my eyes scanned the half-naked bodies as soon as they hit satin sheets. No moles, never any moles. I watched mothers’ bodies at the swimming pool, tan backs slathered with Bain de Soleil and sun spots, but never the stark cluster I knew as my own. I watched movies and pored over magazine spreads. Kathleen Turner, Michelle Pfeiffer, Julia Roberts: No moles, never any moles.

And so, I twisted myself in pretzel shapes to avoid a painful reveal. At sleepovers, I changed in the bathroom. Swimming pools were straight out. I feared formal dances, the domain of backless dresses, and the raunchy skin displays of Spring Break. Being with guys was tricky, but you could keep your back pressed up against a couch, or a concrete wall, or the squeaky vinyl of a backseat. You could wiggle around to keep yourselves facing each other, and they’d never know why, but they wouldn’t really care. Girls had all sorts of weird no-fly zones. Whatever, let’s make out.

One night in college, I was hanging out with my friend Dave when I told him about my back. I don’t know why, exactly. Dave and I weren’t dating. It wasn’t like that. But we were standing on a smoking porch where we all spilled our secrets, emboldened by moonlight and Jack Daniel's, and I understood that I was going to have to be seen eventually, and I wanted a man with eyes as kind as his. I lifted up the back of my shirt, and I turned around. There was an ache in my throat as big as a watermelon. But afterward, it was gone. I don’t remember what he said, or what I said. I only know that it happened, and it mattered. And though Dave and I would never touch each other, it might have been one of the most intimate moments of my life.

I made a certain peace with my back in that moment, but other body obsessions arose to take its place: my short legs, the rough skin on my arms, a forehead that was shiny as a traffic light. I was obsessed with my weight, which fluctuated by 40 pounds, and I blamed it any time a man dared to do anything less than love me till the end of time. As though nothing else could possibly be wrong with me.

And yes, I understood how ridiculous this all was. Babies are born without limbs. Flies buzz around the distended bellies of starving children in Africa. What the hell was wrong me? How selfish and loathsome to be consumed by such common defects of the body. How it crabbed your worldview. Never mind the vast geopolitical landscape. Let’s talk about my thighs.

At 26, I got a job at a foster home for children with catastrophic illnesses. I wanted to demolish my vanity, my puny little narcissisms, and direct my mind toward work that mattered. There was a little girl who had never spent a day outside her crib, whose only communication was a low and haunted moan. There was a baby born without a brain. Without a brain. His skull never formed, and his head was like the ridges of a cliff you could fit in your palm. How I loved him. How his very existence twisted me inside. And maybe that job cracked open my perspective a bit, but it also filled me with despair. It became one more push to the other side of the pendulum, where I ate macaroni and cheese four times a week and drained any open bottle, and buried that damage beneath baggy hoodies and long skirts, and never stopped ruminating on my own body but pretended that I had, because such self-absorption would be stupid and girlish and weak.

But it would also be OK. It would also be human. Most of us have some body obsession, some part of us that tells a story different than the one we want told. What I understand better now is that those embarrassing quirks are what keep us from being boring. A Photoshop world would be so bland. Last summer, I was at a Jean-Paul Gaultier exhibit, and I was struck by this quote: “I like the blemishes, scars, the emotions of the skin.”

As I’ve grown older, I’ve been able to let go of that body anxiety more -- just in time, I fear, for all of my body to sag. But screw it. Sagging flesh could still be hot. The great lie of mainstream porn is that the human sexual appetite is bland and everyone desires the same thing (big tits, blonde hair, shaved crotch), when the human sexual appetite is actually vast and staggering. One person's turn-off is another person's fetish. The brow you find thick and prehistoric I find manly and strong. I see my moles as something to hide, and you see them as a map of the night sky.

Not long ago, I was at a wedding with my old college buddy Dave. I was wearing a blue Grecian dress with one strap that twined over my right shoulder. It was a sexy, drapey thing. Dave and I were having a serious discussion under a canopy of Christmas lights and a luminous moon, and he told me how glad he was to see me wearing that backless dress, how glad he was that I didn’t care about the moles on my back anymore.

Tears sprung to my eyes before I could even speak. I had forgotten about that night, and it stung a bit to be reminded of it. Here I was, my 38-year-old kick-ass self, and I did not care to think of the sensitive flower who raised the back of her shirt with trembling hands on a dark night in the late '90s. I hate this shit, this business of being flawed and human. But what can you do? Just because you manage to become a little stronger doesn’t mean you have to erase the person who might have been a little weak.

I drove home that night happy to have been seen by an old friend. Happy that there are people who loved me then, and still love me now. It was a dark country road, and the stars burned against the dark Texas sky. I could not help staring up at them, looking for the constellations as I drove.