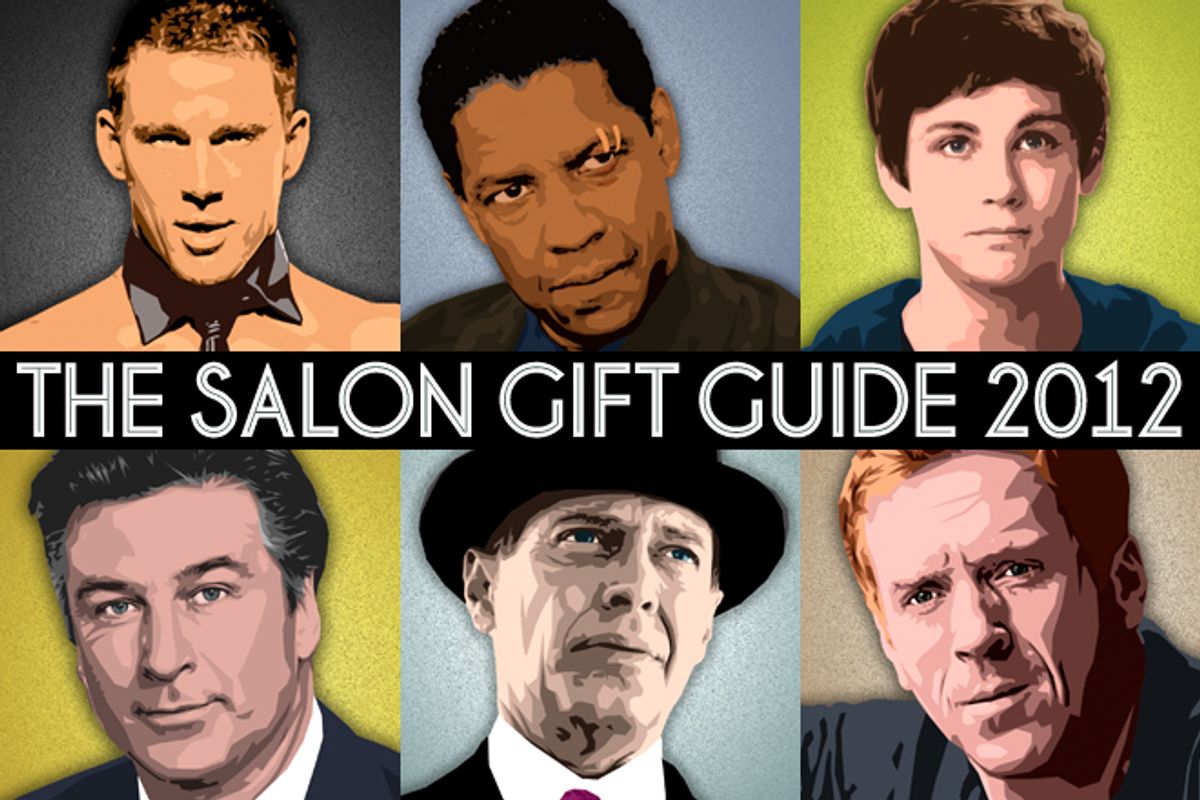 He always has the best booze. Let him show off his cocktail skills with this retro twin-engine airplane cocktail shaker ($79). Pair it with the wood and steel Sheesham Ice Bucket ($198) for a full service.

A classic badger shaving brush ($175) for a classic dude.

On the surface he's a gentleman, but don't mess with him or his business. He can tuck in the message end of the Marc McNairy "F*** Off" pocket square ($18), but he'll know it's there.

The Jack Spade mill leather tie case ($145) will help him keep his affairs in order while he's on the road for business (or hiding in a safe house, or in protective custody). He's the best gift-giver in the world, but you can't throw up your hands. Though it's not quite zero dollars, you can help him live out his 007 fantasies in the Riviera Polo Shirt ($105).

Take up a collection around the writer's table to keep him in a good mood. Tucked behind each door in the Whisky Advent Calendar ($238.42) is a different small sample, just enough to get him through the next meeting. He'll he surprised by the hidden full-size bottle, too.

He's a talented painter. Let's hope he uses his powers for good. The Studio Essential Art Set ($149) will look handsome in his office.

It's not always possible to get him to Christie's when he's feeling down, so you're going to bring Christie's to him with the Christie's Auction Paddle Ball Game ($50).

It's going to be obnoxious, but he'll love ringing this vintage-style brass boxing bell ($149) at the slightest provocation. He's not a bad guy. And even if he mends his ways, he's still going to look. Help him stay discreet with the Monroe Panda wood sunglasses ($119.95) in brown.

His last girlfriend made him delete all the best photos from his phone. Taschen's "The Big Butt Book" ($59.99) is the fourth installment in Dian Hanson's critically acclaimed body part series. The collection puts the backside front and center, where it belongs.

None of us is getting any younger, but a good pair of shoes always fits. These Mark McNairy saddle brogues ($498) are Ivy League with a dash of street smarts.

It's a piece of art after any writer's heart. Lithograph prints use the text from classic books in their design, and upcycled remainders are transformed into art. He'd like "20,000 Leagues Under the Sea" ($29).

The upside of being single: He can display an Evil Robot bespoke superhero-meets-tentacled-monster lamp front and center. (Prices vary, and Evil Robot also takes commissions.) He's almost always late to the airport -- even when he's the one flying the plane. Help him stay on time with this classic watch from Mondaine ($245).

Because he drinks a little too much on weeknights and can wake up in the morning looking like six feet of bad road, a pair of Ray-Ban sunglasses should work wonders. Aviators ($145) are great for hiding bloodshot eyes, or you can opt for a pair of Wayfarers ($150) if his tastes lean more retro.

He’s moody, bluesy and sometimes a little petulant. Help him cool out to his favorite Bill Withers and Curtis Mayfield albums with this portable record player from Crosley ($100).

He has a number of bad habits he'd like to break -- chain-smoking chief among them. Give him a push in the right direction with an electronic cigarette kit from Blu ($69.95).

OK, he’s made his fair share of mistakes. Maybe he’s even battled a substance abuse problem. Trust us, it can be so much worse. New York Times columnist David Carr’s “The Night of the Gun” ($15) isn’t just a riveting memoir of one man’s self-immolation, it’s an extraordinary feat of journalism. He really wants to be a writer, but he's not sure what he wants to write about. Get him get started with "Ready, Set, Novel!" ($16.95), a workbook full of plotting and planning tips compiled by the founder of National Novel Writing Month and others.

He's been wearing the same raggedy Nirvana T-shirt for months. Help him dress it up a bit with this Brooklyn Circus lightweight cardigan in oxblood ($95).

While he's at it, throw in a pack of plain T-shirts and these custom iron-ons by Julia Rothman ($16) and he can create some new designs. Because he's not going to be a stripper forever. He has dreams of building things by hand. The DeWalt cordless compact drill/driver kit ($180) is the most useful toy he'll ever own.

He pays for everything in singles and they're kind of a mess. The Cartier lines and logo money clip ($130) has a palladium finish (stain-resistant, thank God).

Now that he's done dancing, he's spending more nights at home. The Xbox 360 with Kinect sensor ($249) will give him an outlet for that restless energy.

Throw in Dance Central 3 ($49) and he can show off his moves in the privacy of your living room. Yes, there's a multiplayer mode. How can you bring a baby into this world? Matt Bell's novella "Cataclysm Baby" ($12) attempts to answer that question with 26 stories of mutant babies and their dogged, hapless fathers, trying to do right when it's the end of the world as they know it.

He might not realize it, but he wears his heart on his sleeve. Jeff Davis' handmade, upcycled Record Cuff Bracelet ($35) pairs rhodium-plated brass with discarded vinyl — the biggest sin.

He knows them all by heart, of course, but this slick taxonomy chart of rap names by Popchartlab ($27) covers all the Li'ls (John, Wayne, et al.) and Bigs (Boi, Pun, Daddy Kane), cataloging rappers' names by such categories as Animal, Vegetable, Mineral and Honorific Titles.

Those dusty old crates have got to go. The Odyssey carpeted LP case ($98.90) holds 200 of his favorite records. Are you together or not? It's too early to tell. A sweater's a safe gift. L.L. Bean's wool commando sweater ($69) is inspired by British SAS units in World War II, so it's not like you're making him take sides.

You can tell him it's for yard work or camping, but with your luck, sooner or later he'll be burying a body. The Gerber Folding Spade ($75) is tough, lightweight and serrated for speed.

Multiple identities call for multiple wallets — you know that. This minimalist leather card and ID case ($80) comes in two colors for quick changes.

For weekends away (or on the run), this nylon and leather weekender bag ($225) is civilian issue and a nice upgrade from the standard backpack.

What time is it in Baghdad again? Pay attention to how he sets the Dual Time Zone wooden watch ($139.95). You drew his name in the office Secret Santa Fun Swap and you know nothing about this guy. Last year he gave you some ring and then acted all weird about it. It's time to bust out the five-pound Gummy Bear ($29.95).

It's not such a stretch to imagine he might like imprisoning a person in a little jar. Le Petit Singularite DIY terrarium kit ($25) comes with everything you need to make a little outside-in: a corked glass jar, moss, stones and a tiny little person (help!).

Because he has a drawer full of these and nobody knows why. Floppy Disk Sticky Notes ($12.99) come in packs of three.

When he opens the mail, he makes a sound like a lumberjack felling a tree. Perhaps he needs a new method. Let's hope the Yohei Oki Birdie Letter Opener ($12) doesn't start an unfortunate whistling thing.