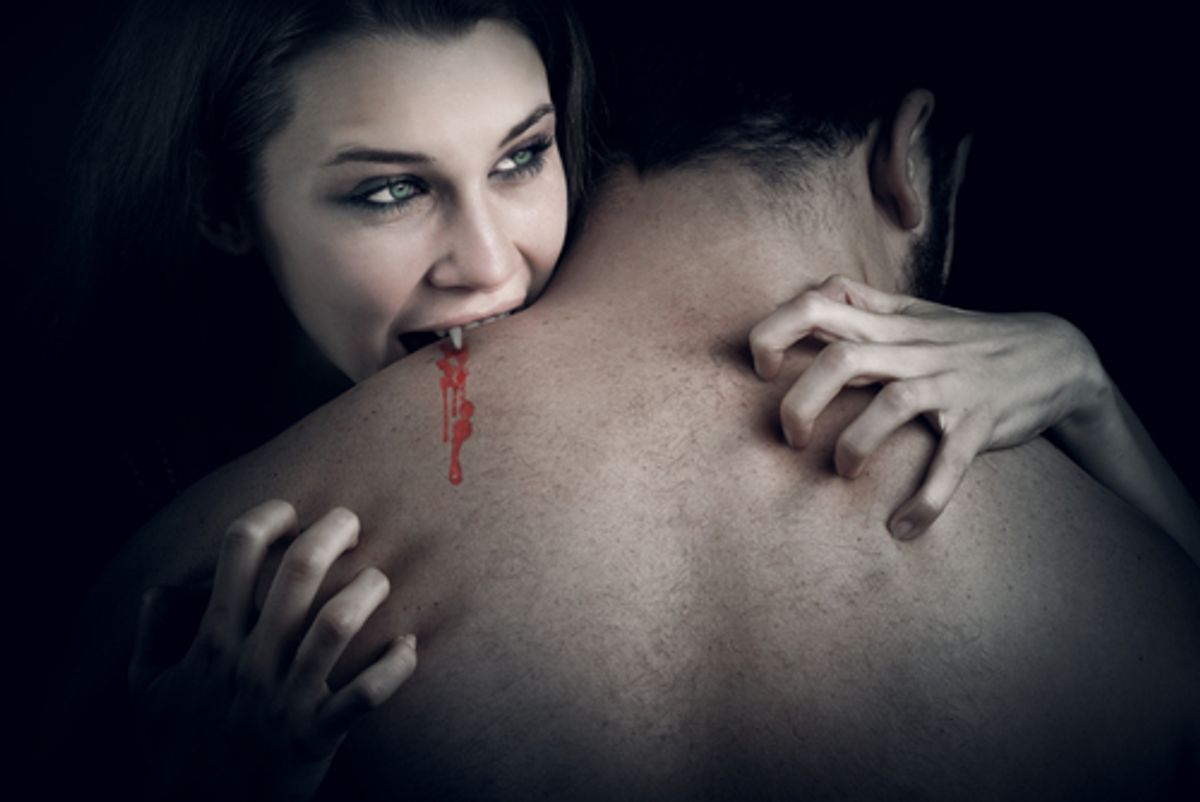 The reigning scientific consensus on sexual orientation is that it's an inherited, biological trait, but that's just because scientists don't know how to party. A far sexier explanation has been offered up by Christian magazine Charisma, which conducted its own investigation into the origins of homosexuality to reveal the real culprit: sex with demons.

"Can demons engage in sexual behaviors with humans?" the magazine asks. Why yes, they can! At least according to the article's primary source, a former stripper-turned-ministry leader named Contessa Adams. Adams shares her decades-long struggle with demon sex, sparing no horrible, sexy detail:

"Anybody that has been attacked by them will tell you ... they're worried [that] they could not find that pleasure with mortal people," says Adams, who claims she was once possessed by sexual demons.

Adams says the succubus spirit that used to attack her confused her so much that she contemplated becoming a lesbian.

Then God came along and ruined everything, I mean saved her, putting her on the path to righteousness and helping others who are (naked) wrestling with their own sex demons.

But demons aren't just about getting laid. They're wreaking havoc all over the place, in addition to the mischief they've wrought on confused Christian genitalia.

The primary demon fighter in the modern Christian world is the New Apostolic Reformation (NAR), a global network of Charismatic Christian ministries devoted to Dominionism, the idea that they must take over public institutions in order to save America and the world from ... demons (and gays, of course). NAR is ridiculous, but that doesn't mean it isn't powerful, with millions of followers worldwide and domestic and international political relationships ranging from Senator Sam Brownback, Mike Huckabee and Newt Gingrich to heads of state in Uganda.

Bruce Wilson, who's reported on the movement for years, tells Alternet, "for the apostles and prophets of the New Apostolic Reformation, demon powers, and also divine curses -- incurred by human unfaithfulness to God's plan, are at the root of virtually any and all conceivable misfortunes, from crime trends, drops in the stock market, and declining SAT scores, to headaches and dandruff. I mean that literally."

The movement broke into mainstream political coverage a few times in recent years: once, when reporters obtained footage of a bizarre ceremony involving Sarah Palin, and also during the interminable Republican primary when Rick Perry, long-rumored to have wrestled a few sexy gay demons himself, hosted a massive prayer rally organized by two NAR ministries.

NPR reported at the time that the Perry rally was modeled on the prayer events of the Call, a NAR group founded by apostle Lou Engle. As Rachel Tabachnik, who's done extensive reporting on NAR, told NPR, "The apostles teach what's called 'strategic level spiritual warfare' [because they believe that the] reason why there is sin and corruption and poverty on the Earth is because the Earth is controlled by a hierarchy of demons under the authority of Satan."

Here are just a few places you might encounter Satan's minions.

The last thing Detroit needs is a large-scale demonic invasion. Fortunately, all the people of Detroit had to do to beat back the forces of hell was join the New Apostolic Reformation movement's giant prayer-a-thon.

In 2010, Engle held a prayer rally in Detroit. Engle, who seems to know how to move tickets, warned Detroit's citizenry, "If we actually have the Call and you don’t sustain prayer ongoing you open a vacuum for demons seven times worse to come in ... if black and white can’t move together in prayer and sustain it, forget it -- let’s not even go there, you get demons seven times worse.”

The goal was to convert the state's Muslims to Christianity. In a YouTube clip filmed prior to the rally Engle explained that the prayers would send Jesus into Muslims' dreams, which sounds like way less fun than a visit from a sex demon.

For obvious reasons, it doesn't seem like a giant stretch that financial markets are run by evil demons, but still -- here's a theory on global financial instability, outlined by Bruce Wilson:

Van Nuys, California-based megachurch pastor Jack Hayford, current head of sex scandal-embroiled GOP Senator John Ensign's religious denomination, has endorsed a theory proposing that a supernatural mechanism drove down Japanese stock market prices during the early 1990s: the Japanese emperor's alleged sexual intercourse with a "sky goddess" who, according to the theory, might be a succubus.

"Beginning in the early '70s I suffered severe headaches for 10 consecutive years. It was so bad that at one point I had no relief from pain at all for 70 days and 70 nights. No available painkiller could stop the headaches. Then in 1983, John Wimber received a rhema word from God that the root cause of my headaches had been a demon and that I was to drive it out myself rather than ask someone else to do it for me. I obeyed. I cast out the demon in the name of Jesus, and I have not suffered any such headaches since that day."

Territorial demons are standing in the way of the mass evangelization of Native Americans, according to NAR teaching (chronicled in a glossary on Talk 2 Action, a blog that tracks the extreme religious right). Getting them out of the way involves atoning for past mistreatment of native populations with apology events and also breaking invaluable artifacts. Rachel Tabachnik explains;

The apologies appear quite sincere and result in multiethnic and multicultural partnerships. However, the process of reconciliation is for the purpose of taking "Christian dominion" over other religions, ethnic groups, and belief systems. It requires renouncing of former cultural practice and artifacts which can not be absorbed in evangelical practice, as demonic. The Transformations videos reenact a number of examples of destruction of native artifacts, and leaders have claimed that their prayers resulted in spontaneous destruction of buildings and icons of other religious practices.

5.  Your Towns and Cities, the Entire World

The main strategy Charismatic Christianity has brought to demon-fighting is so-called spiritual warfare or spiritual mapping. The idea is to find demon-infested geographic locations and pray the evil spirits away. According to Bruce Wilson, "Prayer-walkers pray for unknown city residents and they are also encouraged to map and and take notes on alleged ideological enemies, who are held to be under demon influence."

Occasionally this involves the following questionable use of public resources, as Wilson writes, "Components of the prayer-walking and demon-deliverance ideology are being incorporated into the police practices of Orlando, Florida and Peoria, Illinois, in novel and factually challenged efforts that partner local Christian churches with police departments of those cities; teams of church members, with police backup for safety, walk high-crime areas and try to pray down violent crime and murder rates."

But why stop there? Bruce Wilson has documented the massive global effort of the international Transformation network, linked to the larger NAR project. Characteristically, participants in the ITN believe homosexuality is caused by demons that must be eradicated. "The ITN is one of several global efforts operating under the 'transformation' brand, that are re-engineering  along theocratic lines cities and even entire nations." writes Wilson.

They have taken a particular interest in Uganda. "For the Transformation movement, which claims homosexuals are possessed by demons and that prayer and faith healing have cured thousands of HIV and AIDS cases in the nation, Uganda is a prototype."

"For over a year ITN representatives have been at work to setting up a training network spanning  approximately 14,000 evangelical churches in Uganda, and ITN's head Africa representative states."