Sam Gordon's athleticism has earned her national attention — even her own Wheaties box. But can she ever go pro? 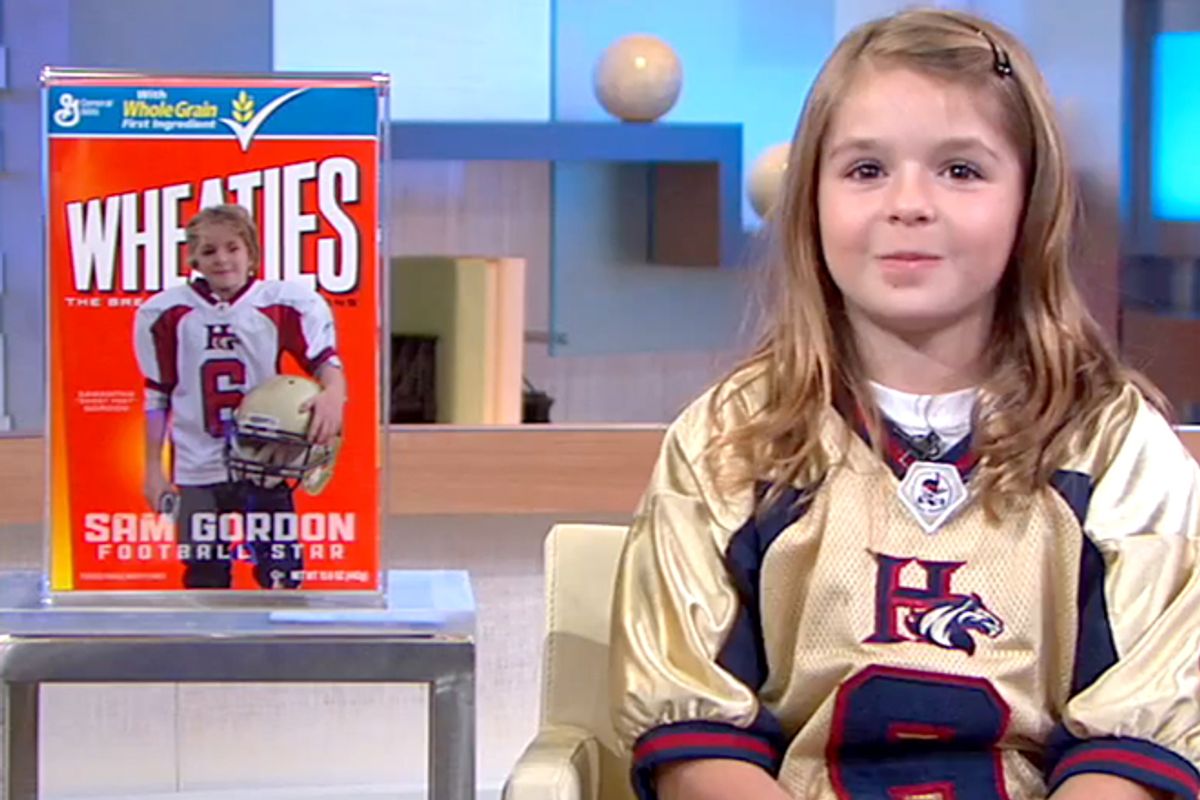 Why does Sam Gordon make us so damned happy?

The 9-year-old girl quarterback is a viral video champion. On Nov. 5, her father posted a video surveying the highlights of her performance in the 2012 season. Days later she became national news. Her father's video shows her breaking away from tackles and making them, taking hits, gaining yards and making touchdown after touchdown. Mostly, we see her being chased down the field, eluding the outstretched hands of the boys trying to bring her to the ground. Her first-ever season as a football player concluded with her landing the cover of a Wheaties cereal box.

She's been on ESPN's "Sports Center," "Monday Night Countdown" and ABC's "Good Morning America." But her best media appearance was on NFL's "GameDay." Instead of entertaining the curiosity of television hosts, she hung out with pro football players. Like a lot of athletes, she is much more relaxed in the company of her tribe.

Former coach Steve Mariucci gave her the full sportscast treatment. He put her highlight reel on the monitor and broke down her play with gusto. The segment is scored with guitar riffs, Mariucci shouts, as he compliments her on her two-handed ball fake and ribs her because as she's outrunning five boys and the official while she keeps adjusting her helmet. It's too big. That's his one criticism of her play.

As if that weren't joyful enough, she then shares her love for playing D with Warren Sapp and Marshall Faulk. She introduces herself to the guys by declaring her love for the hit.

Sapp and Faulk review highlights of her tackles. She is a bulldog, her tackles are low, fast and ferocious. They invite her to try out her favorite jukes on them. Of course the old guys look slow and heavy against the little girl, but her moves are spot on. Soccer is her regular game, so she knows how to deceive, turn and stop and start. (Her nickname is "Sweet Feet.")

Then they play with tackling. The segment ends with Gordon and Marshall Faulk in a playful tumble. It's the kind of things that kids do with their dads, with their brothers and friends in the backyard. Rough and tumble play.

In 2010, 13-year-old Chelsea Baker was the best pitcher in little league baseball. Girls have been wrestling boys at the high school level for a while now. Girls play with and against boys in a range of settings and it doesn't make this kind of news.

So what it is about Sam?

It's one thing to see a girl outrun boys or to watch her pitch a perfect game. It's another, however, to see her take a hit and make a tackle. To see her swarmed by players, taking her knocks and acting like it's no big thing. Making this spectacle even sweeter is the obvious joy she takes from it.

Asked in interviews about her game, she explains that she likes beating the boys. She likes schooling them. She doesn't taunt them, because she doesn't have to. Eating her dust is enough.

If the interviewer knows the game, speaks the lingo, she starts talking game with him. She'll explain how she goes for the outside and why. That she can cut, and that helps. When Dave McCann (of BYUtv) compares her season stats to those of former BYU running back Luke Staley, she politely explains her stats might look better than his, but college football is a lot harder. "A lot more kids, like, know how to tackle."

The thing about Sam Gordon is that she hangs with the guys like she belongs with them. She somehow turns what should be patronizing into a point of entry. She behaves as if that patronizing vision didn't exist. Some part of her seems to know this is extraordinary, otherwise why assert the pleasure of being the girl to beat the boys?

In the end, you can see that in her bones she knows that this is her scene. That there is fun to be had in making the hit and by gosh she is going to take it. Sure, she'll age out of football and likely back into soccer as the seasons roll by. And sure, we can talk about how when she grows up she'll have a tougher time against the guys as they get bigger and bigger.

But as she grows up she will always have the memory of the pleasure of the tackle and the touchdown. She will always know what it feels like to beat bigger opponents who are supposed to be both stronger and faster than she is.

Who knows what strength, what power the knowledge of this pleasure will bring to her and in what settings?

Jennifer Doyle is a Professor of English at the University of California, Riverside. She is the author of "Sex Objects: Art and the Dialectics of Desire," and writes From a Left Wing, a feminist blog about soccer. She lives in Los Angeles, California.