Forget the goofy uncle image. Biden's the only senior official willing to dissent from the foreign policy consensus 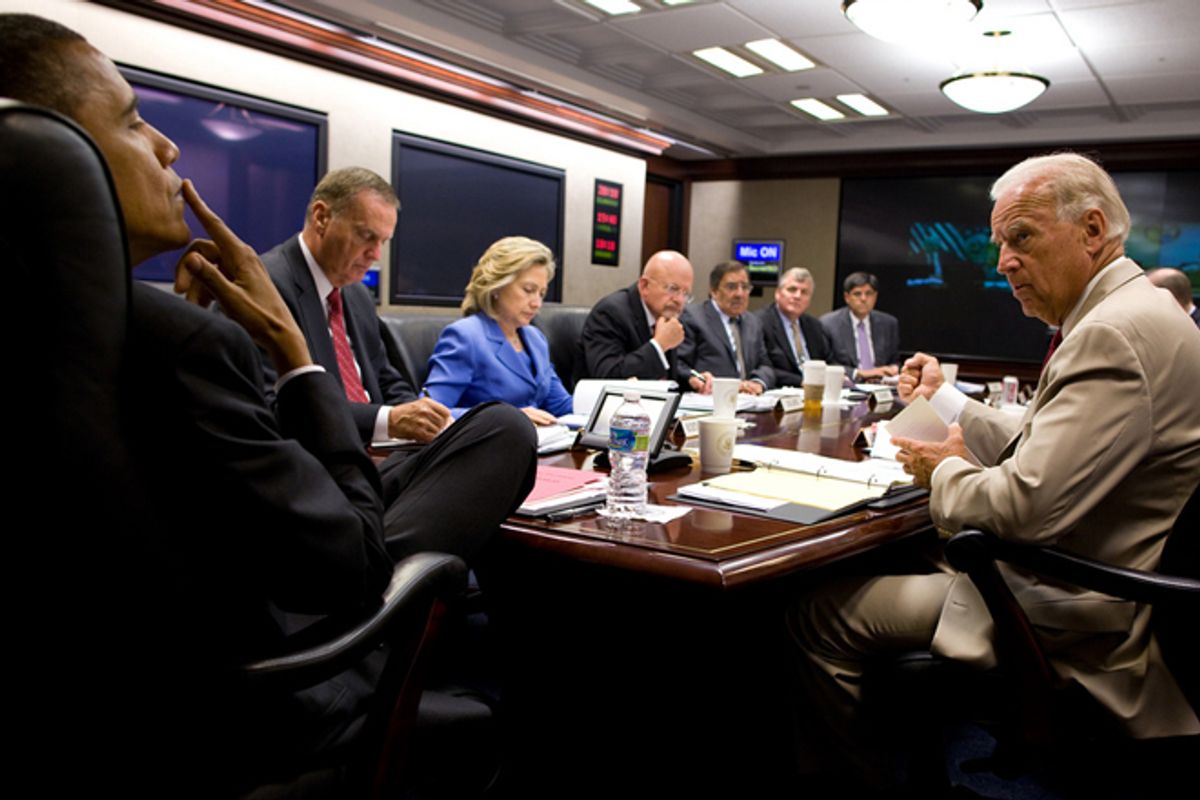 Justin Logan, the director of foreign policy studies at the Cato Institute, has an excellent piece at the American Conservative arguing that Paula Broadwell’s quick and inexplicable rise through the foreign policy establishment -- to a station that would put her in such close proximity to David Petraeus -- illuminates the groupthink of the national security elite in Washington. It's an elite that obsesses over process arguments while eschewing real debate over important strategic issues.

For instance, Logan writes, the debate over Iran starts and ends with the assumption that the country must be prevented from acquiring nuclear weapons at all costs. It's almost impossible to find inside voices who question that underlying assumption, even though there’s plenty of evidence that it would be possible to contain a nuclear Iran at reasonable costs. Meanwhile, President Obama made few major adjustments to George W. Bush’s national security apparatus. Mitt Romney, who disagreed with Obama on just about everything, could find almost nothing substantive that he would do differently from Obama on strategic national security issues. On Israel, China, Russia or the need for a massive American military empire there is a clear, bipartisan foreign policy consensus; dissenting voices are dismissed almost out of hand as unserious, so most people who hold them stay quiet to stay on the inside.

Which is why we should be grateful for Joe Biden. As the country faces a foreign policy crossroads, with a reelected administration bringing in a new secretary of state and renewing consideration about how to extricate itself from Afghanistan, Biden is a rare dissenter. It’s too bad that he's become America’s goofy uncle, though it’s a role he seems to relish, as it obscures the fact that he’s a critical and experienced thinker on international affairs, serving as a senior member of the Senate Foreign Relations Committee for decades. Regardless of whether you agree with him or not, or if history has proven him right or wrong, he is one of the few figures in the most senior echelon of foreign policy thinking in Washington willing to give voice to unpopular views on the national security questions of the day that might otherwise be absent from the debate.

Beginning in the Reagan era, Biden has been willing to present a counter-narrative to prevailing views in Washington. He supported a nuclear freeze in the 1980s while the administration built up the arsenal, he opposed a ballistic missile shield, opposed arming the Nicaraguan contra rebels, and opposed Reagan’s defense buildup. Under George H.W. Bush, he famously opposed the first Gulf War. After Bush’s son became president and invaded Iraq, he infamously called for dividing Iraq into three countries and opposed the 2007 troop surge.

As vice president, he has perhaps became only more outspoken, sometimes necessitating other administration officials to walk back Biden’s off-message pronouncements.

Most famously, he opposed the operation to kill Osama bin Laden. Mark Bowden, the author of a book on the operation, reported in Vanity Fair last month: “It was widely reported in the weeks and months after the raid that most, or at least many, of the president’s top advisers opposed the raid. That is not true. Nearly everyone present favored it. The only major dissenters were Biden and [then-Defense Secretary Robert] Gates, and before the raid Gates would change his mind.”

And, in the way most relevant to Petraeus, Biden has been a consistent opponent of the Counterinsurgency (COIN) approach to the wars in Iraq and Afghanistan. "I do not see how anyone who took part in our discussions could emerge without profound questions about the viability of counterinsurgency," Biden wrote to Obama in a 2009 memo that was later leaked to reporters. The administration had just completed an exhaustive review of the war in Afghanistan as it considered what to do with the flailing war. The wisdom of COIN, conceived and advocated by Petraeus, was largely unquestioned. But Biden advocated a much lighter footprint with a limited mission of fighting terrorists,  recognizing that the nation-building effort at the heart of the COIN strategy was hopeless.

Biden lost that time (Obama decided on a Petraeus-blessed “surge,” which Biden opposed) as he did with bin Laden and on countless other decisions small and large. And Biden’s countervailing prescriptions haven’t necessarily proven to be better or more prescient than the establishment consensus -- he blew some major calls, like bin Laden and the first Gulf War, for instance.

But even if you think that Biden “holds the American record for wrong on the most issues in foreign affairs ever,” as Charles Krauthammer does, any fan of critical thinking and serious debate should applaud his courage in advocating minority foreign policy perspectives that might otherwise be ignored in the "serious" Washington debate. Expanding the notoriously narrow spectrum of possible foreign policy options in Washington debate, the so-called Overton Window (to borrow Glenn Beck’s favorite poli-sci jargon), should be encouraged, not dismissed. Biden is one of the few senior officials willing to do it.

Certainly, he’s hardly a radical and has on balance endorsed the bipartisan foreign policy consensus of liberal interventionism (he supported the Iraq war, for instance), but he’s better than nothing, which is probably the alternative.