The case against cooperation

Democrats pushing for compromise to avert a mythical "fiscal cliff" are hurting their party, and the country 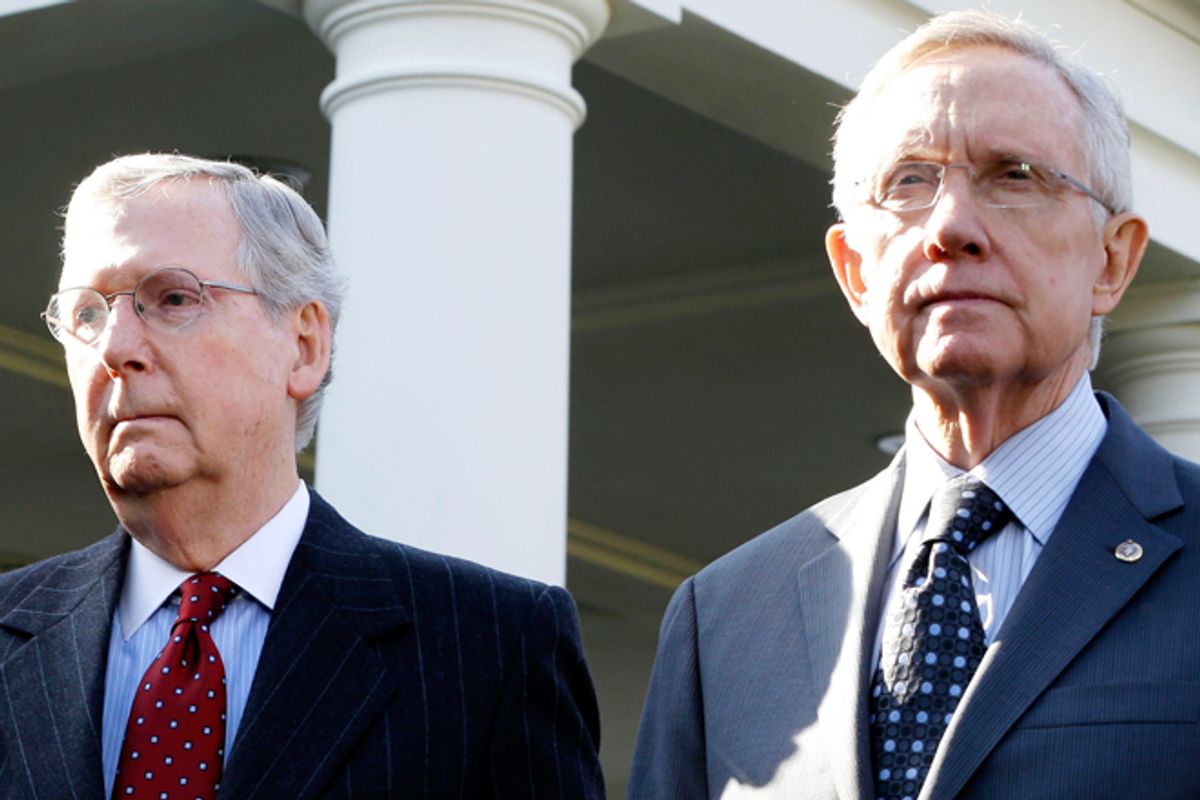 Senate Majority Leader Harry Reid's attempt to reform the filibuster probably won't go as far as the Senate needs to end gridlock, but it could have one positive impact: making bipartisan cooperation on a solution to the so-called "fiscal cliff" impossible, according to Mitch McConnell.

“We have huge issues before us here at the end of the year, much of which will probably carry over into next year,” McConnell said in a debate with Reid Tuesday. “It’s a time that we ought to be building collegiality and relationships and not making incendiary moves that are damaging to the institution and could have serious ramifications on our ability to work together here at the end of the year.”

I'm not going to go over a political cliff over David Plouffe's remarks about the fiscal cliff. As has been widely reported, Plouffe told a college crowd earlier this month that the president was prepared to disappoint the left by making a "grand bargain."

"Democrats are going to have to do some tough things on spending and entitlements that means that they'll criticized on by their left," Plouffe insisted. The White House knows, he added, that it must "carefully" address the “chief drivers of our deficit”: Medicare and Medicaid. Plouffe even suggested the president might be open to lowering tax rates on the wealthy.  “What we also want to do is engage in a process of tax reform that would ultimately produce lower rates, even potentially for the wealthiest,” he said.

The National Review Online wasted no time before crowing that Plouffe had endorsed Mitt Romney's tax plan. A stretch, but not by much.

There's so much wrong with Plouffe's remarks, I don't know where to start. For one thing, Medicare and Medicaid aren't "chief drivers of the deficit"; Bush tax cuts and two unfunded wars are. But I'm not flipping over Plouffe's remarks for a few reasons. First, he holds no job in the Obama administration, so he speaks for no one. We can presume he knows what the president is thinking on this issue, but I'd rather hear from the president himself. (Jay Carney says the president won't make Social Security part of the fiscal cliff negotiation, one sign of common sense.)

Second, Democrats can probably get away with claiming to support a so-called grand bargain, in principle, because they know it will never happen: John Boehner and Mitch McConnell will never deliver the votes. So I suppose there's a case for appearing "reasonable" and ready to make "tough choices," when you know you'll never have to go through with it and spell out what those tough choices might be.

But there's also a case against it. It's dishonest, to start with. And it once again lets Republicans frame the terms of the debate. A message to the Obama for America email list urged the president's supporters to back his efforts to work "with leaders of both parties in Washington to reduce the deficit in a balanced way so we can lay the foundation for long-term middle-class job growth and prevent your taxes from going up." Why make reducing the deficit the first issue you take to your core supporters?

It can't be said enough: The "fiscal cliff" is not a cliff. (Salon's Michael Lind breaks it all down here.) All of the tax and spending cuts "scheduled" to take effect Dec. 31 will take effect gradually, and can be reversed by Congress. Democrats hold most of the cards in this negotiation. They should be prepared to let the Bush tax cuts expire, and come back with a middle-class tax cut when Congress reconvenes Jan. 3. Why try to make a deal with this Congress, anyway, when the next one will have more Democrats, and most important, more liberals, on both the House and the Senate side?

For all the blather about courageous Republicans supposedly standing up to Grover Norquist, to a person they're pronouncing themselves open to raising tax revenues, but not rates, when raising the top rates is the only way to raise revenue without closing loopholes and deductions that would hit the middle class, too. There is no deal to be made with this far-right party.

I'm glad Reid is moving ahead on filibuster reform – even though all Jeff Merkley's bill would do is prevent filibusters on "motions to proceed," which essentially let Republicans block debate on whether to debate bills they don't like. It shows Democrats are prepared to fight, and that's something the country needs. The party has been compromising with increasingly irrational and right-wing Republicans for too long. There's no reasonable big deal to be made to avert the tax hikes and spending cuts set for January, not in the next four weeks. The president may feel it's politically wise to still try to seek such a deal, but that doesn't mean the rest of us have to pretend it's possible.