The patient I couldn't heal

As a surgeon, I take pride in my surgical work. But even the most careful doctors have painful lessons to learn 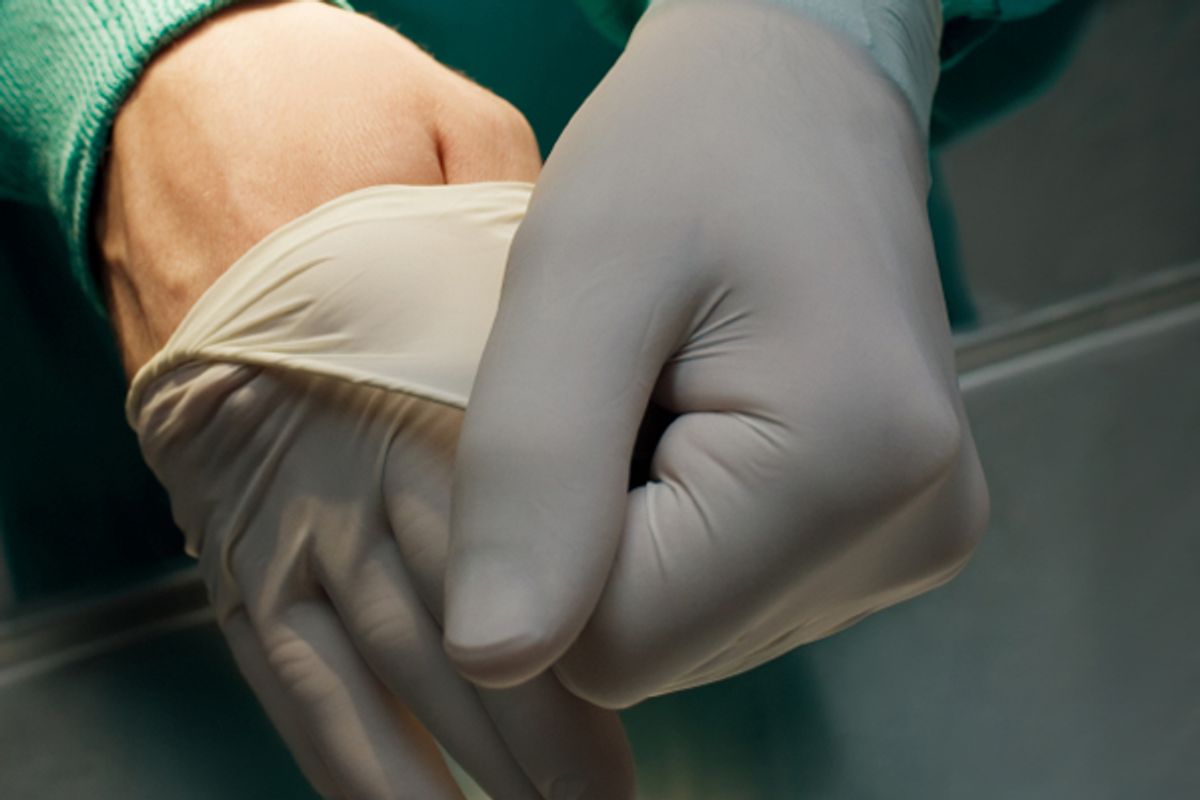 I take pride in closing surgical incisions. After a cold blade opens the skin and the internal work is done, the only thing the patient sees, or knows, is their incision. Maintaining symmetry, I use the finest threads and the gentlest instruments in an attempt to restore what once was. Some surgical residents leave the wound dressing to the operating room nurses; I personally dress the wound to reassure the patient that his tissues were handled with the utmost respect. For me, it is the last step of any operation.

But as I closed Mr. H’s wound, others in the room looked at me as if I were crazy. After eight hours of surgery, why would I be so careful with something as trivial as the wound closure? The anesthesiologist became impatient, and the medical student stood by awkwardly. Undeterred, I carefully aligned the skin edges and neatly applied the dressing.

A grapefruit-size tumor in Mr. H’s kidney had invaded the spleen and part of his intestine. It was covered with ominous blood vessels, trying to engulf the neighboring organs. The tumor was removed, along with the kidney, spleen and a six-inch segment of intestine. He was going to the intensive care unit with drainage tubes in his chest and abdomen. He needed a breathing tube in his throat while blood was still being poured into his veins.

The incision wrapped halfway around his body. The glistening yellow fat and the beefy red muscle came together layer by layer as we closed the gaping hole. The anesthesiologist peeked over the surgical drapes and insisted that I expedite the closure with staples instead of suture. I grudgingly agreed but still took great care to ensure Mr. H’s skin closure would be perfect. I somehow believed that a nice scar would hide the ruin within.

My attempt at perfection unraveled a few days later. It started with a little redness at the corner of the incision. I probed the wound with a Q-tip and ensured the underlying fascia – the dense fibrous tissue encasing the abdomen – was intact. Removing the Q-tip, I saw the characteristic creamy pus of a wound infection. I could smell it. I removed one staple to allow adequate drainage and packed the small defect with a tiny strip of gauze.

Mr. H’s wife was distraught about her husband’s complicated operation and poor prognosis.  And now his wound was infected. I explained to her that wounds can heal in different ways. When tissues are sewn together side-to-side, the fat joins to fat, muscle to muscle, and skin to skin. But when left open with gauze, the gap fills in with pink granulation tissue from the bottom up. Wounds have a remarkable ability to heal, I told her, but her skepticism was clear. We discussed that overall his recovery was coming along nicely. Only a few days after a big surgery, his remaining kidney was working, he was breathing on his own again, and it seemed that he was ready to come out of the ICU. We were all hoping for a speedy recovery.

But our optimism would quickly fade. The last three months of Mr. H’s life were spent in intensive care; his hospitalization plagued by widespread infection and heart, lung and kidney failure.  Staple by staple, his incision unzipped in a matter of days. The wound looked as if I never closed it – three inches deep, four inches wide and nearly 2 feet long. The fascia was intact, a single layer of tissue keeping the outside from his ravaged insides. We reinserted the breathing tube, put drains into infected pockets of his belly, and administered strong antibiotics. Unable to eat, we gave him nutrition through his veins — this was what he had wanted.

Every morning and every evening I would gently remove a 12-foot strip of gauze from the ruined closure, tenderly wash and inspect the bed of the wound, and repack the defect with a fresh, moistened gauze. Weeks went by, and he regained enough strength to turn on his side to allow me to change the dressing – always nodding approval at my attentiveness. I would ask about his pain, examine him for pressure sores and offer a compassionate smile to his wife. I knew his chances of survival were poor and felt crippled by my inability to do anything about it. He was physically deconditioned and clearly depressed.

Day in and day out I tended to his wound with the same passion with which I closed it. And sure enough that massive incision began to close. My medical school textbook calls it “healing by secondary intention.” Thousands upon thousands of cells at the base of the wound would lay down a matrix of tough collagen fibers and proteins. Microscopic blood vessels would creep in and deliver more healing cells that would break down the matrix and build it back up even stronger. Slowly but surely the rising scaffold would bridge the canyon and close the gap.

It took two and a half months for the final scar to form; there was nothing left to pack. By that time, Mr. H was breathing on his own but was so debilitated he could hardly speak – he didn’t seem to have any desire. We arranged to get him home so he could die peacefully in his bed, surrounded by his family.

A couple weeks later, I received word from his home health nurse that he had died. She ensured me that his family was with him at the very end, and his pain was well controlled. His wound had healed completely.

As I read that email, I reflected back on the time I spent with Mr. H. I thought about my obsession with that wound, my painstaking focus on closing it perfectly. First with staples, and then with gauze. I wondered why, after a long and complicated surgery, I cared so much about bringing the skin edges together so evenly. I knew the prognosis was poor. I could have let his nurses pack the wound.

Mr. H brought me face to face with my own imperfections and limitations; every physician has a patient that does. As a surgeon, I realized there are some patients we just cannot save. As a resident, my role in making management decisions in Mr. H’s care and taking out his tumor was limited. But whether removing a large tumor, changing wound dressings, or laying a hand on a dying man’s shoulder, we do what we can do to the highest degree. Yes, wounds certainly do have a remarkable ability to heal.

Alan Kaplan, M.D., is a resident in Urology at UCLA.