A Texas student believes her school's chipped ID cards are a violation of her civil liberties. She's right 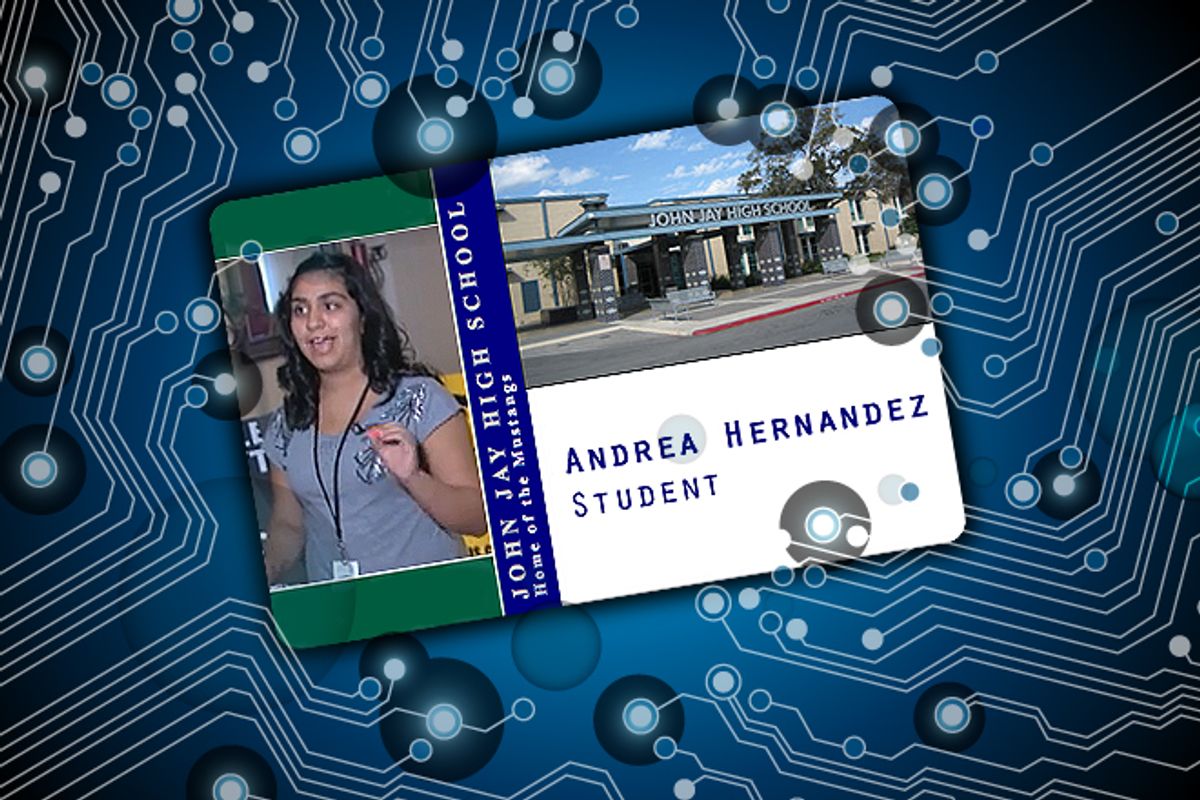 Liberals and conservatives alike are up in arms about the story of Andrea Hernandez, a Texas high school sophomore who is refusing to wear a student ID card embedded with an RFID (radio frequency identification) chip. And, well, they should be; there is much cause for outrage. But most people seem to be missing the real story: Our pathetic national unwillingness to properly fund our public schools is the real root of this latest manifestation of surveillance state evil.

But first, some background. Officials in San Antonio's Northside school district are claiming that the ability to locate the exact whereabouts of students via RFID chips will boost attendance and enhance safety. A number of different schools have attempted similar schemes in recent years, provoking strong condemnation from groups across the political spectrum who argue that forcing human beings to carry electronic tracking devices constitutes a profound invasion of privacy.

Hernandez, represented in court by the Rutherford Institute, a conservative civil liberties legal aid group, goes even further. She and her family believe that the school's decision to suspend her for not wearing the chipped ID card violates her religious liberties, as well as her First and 14th Amendment rights to free speech and equal protection under the law.

Specifically, court papers filed by the Rutherford Institute seeking an injunction halting the suspension argue that Scriptures in the Book of Revelation hold that "acceptance of a certain code, identified with his or her person, as a pass conferring certain privileges from a secular ruling authority, is a form of idolatry or submission to a false god." (On Monday, a local judge granted an injunction temporarily halting the suspension.)

You don't have to believe that wearing an ID card with a computer chip embedded in it is functionally equivalent to having the Mark of the Beast tattooed on your forehead to be disturbed by the prospect of high schools across the nation treating their student populations as targets of constant electronic surveillance. Even before Hernandez's John Jay High School instituted its "Smart ID" program, the school already had 200 surveillance cameras on its campus! How far do we have to go down the Panopticonic road before it becomes impossible to distinguish between free citizens and prisoners?

But at the same time, let's not ignore the real driving force behind the decision to require "Smart ID" cards in Texas: the severe financial pressures pushing school districts across the country to look for any means possible to maximize attendance.

Texas is one of a group of states in which a significant amount of public school funding is tied directly to attendance. In contrast to enrollment-based funding, which allocates dollars according to how many students are enrolled at a school, whether or not they actually attend classes, attendance-based funding is believed to provide an incentive to schools to make sure their students go to class.

There are lots of problems with attendance-based funding -- for one thing, it disproportionately rewards suburban schools in more affluent communities over urban schools where attendance is depressed by chronic poverty. But that doesn't mean we should reflexively blame schools for doing what they must to survive under the current rules. Some of the coverage of the Hernandez case has treated Northside School District's explicit Smart ID rationale -- attracting increased funding -- as somehow unseemly: a greedy grab for a state handout. But that's an unfair reading of what's going on. In Texas (and California, another state that moved to attendance-based funding more than a decade ago) the basic problem is that chronic underfunding of public education gives school districts no choice but to constantly be looking for innovative ways to raise funds.

With that kind of negative external financial climate, school officials will inevitably seek to exploit any tool available to them, and that will surely mean the new capacities of digital wireless telecommunication technologies. This does not mean that such efforts shouldn't be resisted, for whatever reason, but it could well imply that if we treated our schools with the funding respect they deserve, they in turn might be more likely to treat our students with the respect due to free citizens of a free society.

As a concluding note, there's also a funny kind of irony at play in the Hernandez complaint. Hernandez, a straight A student, was enrolled in John Jay High School's Science and Technology Academy, a magnet school program. In her legal complaint, she alleges the suspension will cause "irreparable injury" to her fundamental civil rights because, "among other things [she] will be unable to complete her Web Technology class as no such course is available at her 'home' school." Web Technology, the complaint states, is "her chosen field to pursue at both the Science and Technology Academy at John Jay and eventually, at college."

Web technology, one could argue, consists of code enabling a level of surveillance and privacy invasion on a more persistent basis than anything contemplated in the Book of Revelation. All around us, governments and corporations are already using its capabilities to track and manipulate us in ways far less obvious than the relatively straightforward surveillance facilitated by an RFID chip. They are encouraged to do so by our own passivity, marketplace incentives, and ever present law enforcement overreach.

Hernandez's determination to understand the nature of this beast is applaudable. But let's also try to understand what's pushing school districts to such extreme lengths to ensure attendance. In both Texas and California, efforts to lower property taxes have crippled public education. If we're gonna go on the hunt for for a false god, maybe we don't have to look any further than unjustifiably low taxes.