In Florida last week, a gun enthusiast killed an unarmed teenager for playing his music too loud 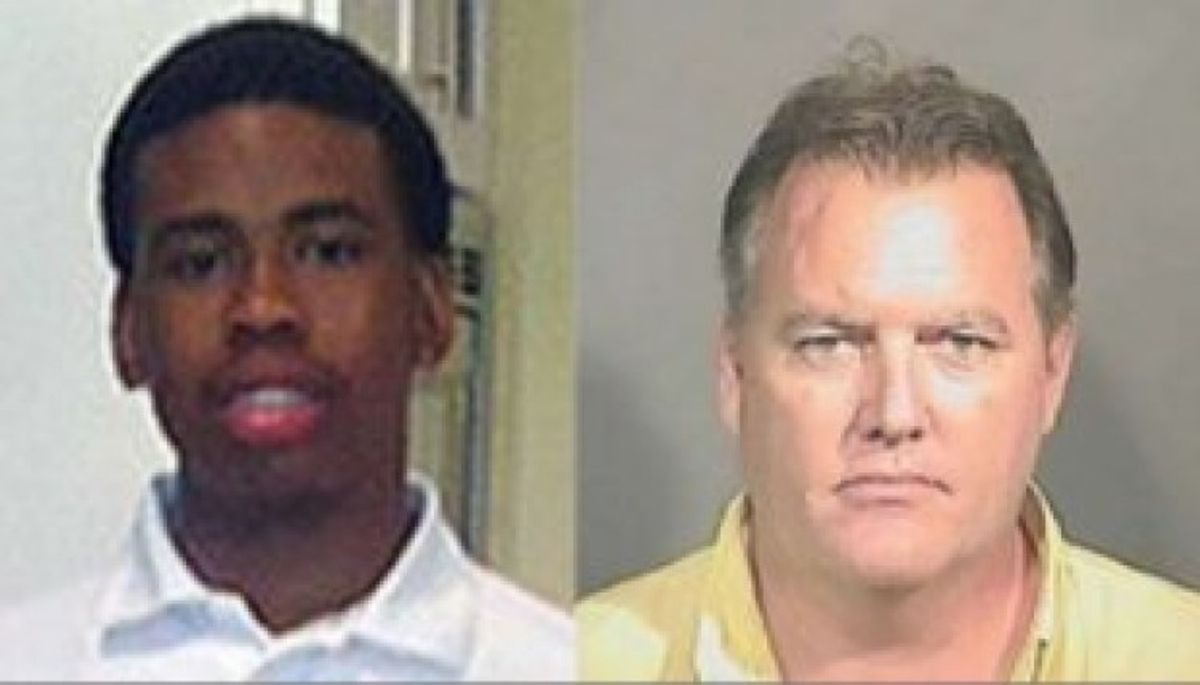 Jordan Davis (L) was shot and killed by Michael Dunn (R) this Friday in Jacksonville, Fla.
--

Michael David Dunn, 45, was in Jacksonville, Fla., this Friday for his son’s wedding, when afterward he decided to stop at a convenience store with his girlfriend. Four unarmed teenagers were in an SUV near where Dunn parked. After Dunn’s girlfriend went into the store to buy a bottle of wine, Dunn made a comment to the teenagers about their music being too loud. An argument ensued, and then Dunn, a gun collector, pulled out his gun and fired at the SUV between eight to nine times. Two shots hit and killed 17-year-old Jordan Davis.

Our victim was shot a couple of times. …They were listening to the music. It was loud; they [other teens] admitted that. But I mean that is not a reason for someone to open fire on them.

When his girlfriend returned to the car, Dunn drove off, admitting to her that he “fired at these kids.” After hearing a news report that someone died in the shooting at their Jacksonville hotel, the couple returned to their home to Brevard County, Fla. Witnesses of the shooting took down Dunn’s license plate number, which, on Saturday, helped police find Dunn’s house, where he was then arrested.

According to Schoonover, after his arrest, Dunn told Jacksonville detectives, “he felt threatened and that is the reason he took action.”

Dunn is being held without bail, and will be transported to a jail in Jacksonville to face charges of murder and attempted murder this week. On Monday, he pleaded not guilty in Brevard County court.

It will be very clear that Mr. Dunn acted very responsibly and as any responsible firearms owner would have acted under these circumstances.

Jacksonville Attorney Gene Nichols, however, said that although Dunn will most likely make a “Stand Your Ground” defense based on his statements in court, it’s a tough case to make.

Mr. Dunn is going to have to answer the question, 'Why did you not call the sheriff's office? If you are reasonably protecting yourself, why did you leave the scene, get in the car, and the next day, flee the jurisdiction of Duval County?' … There's no indication that Jordan or anyone else in that car had a gun, there's no indication that they were any threat to Mr. Dunn.

In response to the task force’s findings, Benjamin Crump, the attorney who represents Martin's parents, had told the Palm Beach Post two weeks ago:

We all believe it’s asinine that you can pursue someone, that you can be the aggressor and then shoot an unarmed kid and claim you were standing your ground. … Until we fix this law, there are going to be a lot of asinine claims of 'Stand Your Ground' when there’s another Trayvon Martin.