Is cheerleading a sport?

Gone are the days of pompoms and splits. Cheerleading routines aren't just complex, they're downright athletic 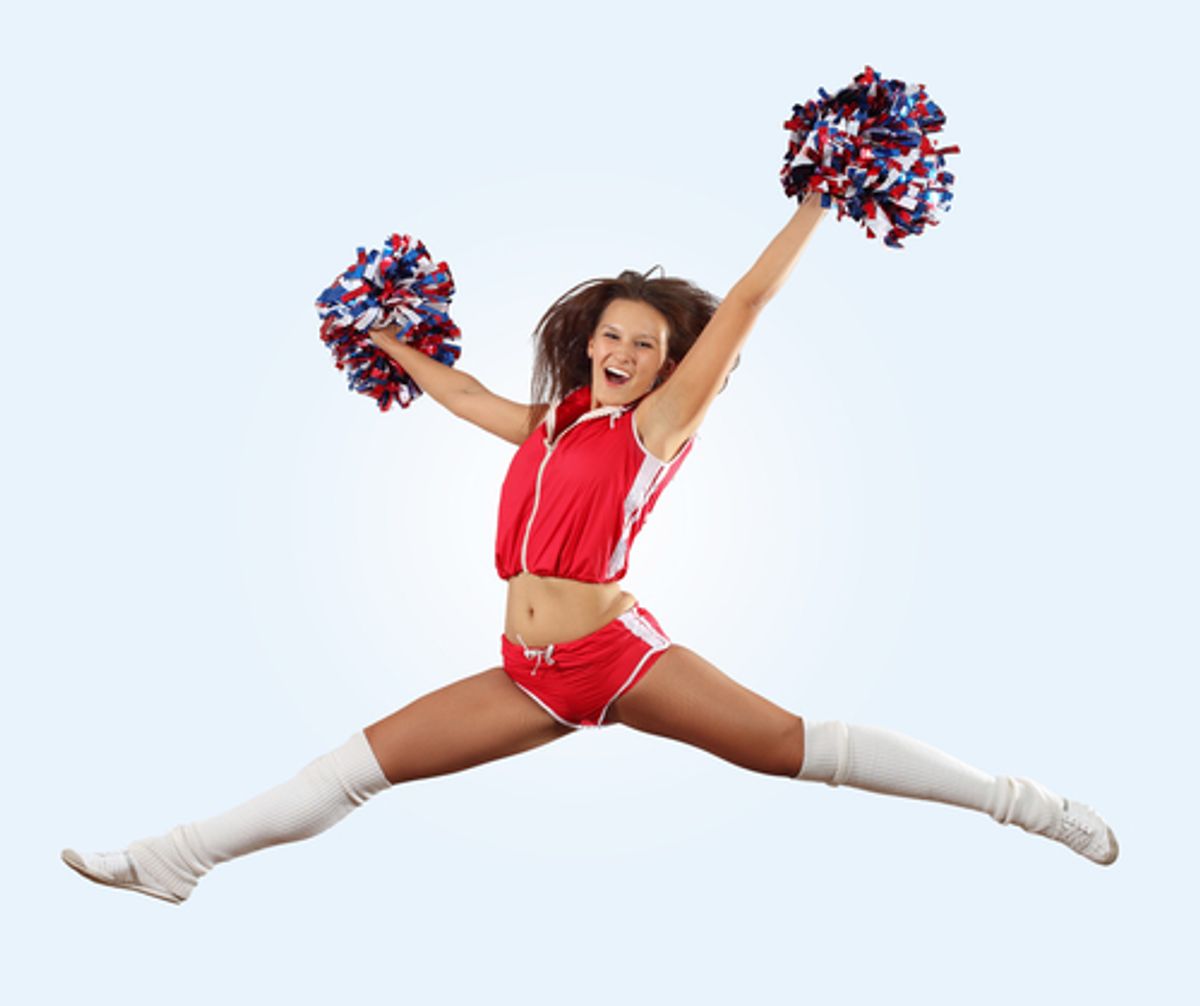 If the leaves are changing color, it means all things pigskin hog the spotlight, with the main focus on the football field as gridiron gladiators go to battle. But shift the attention to the sidelines to the cheerleading squad, and you’ll find similar athleticism and the same kinds of debates over safety concerns as those currently at the center of football. It’s a reminder of a question that would appear simple on the surface but is in fact bedeviling the world of athletics: Is cheerleading a sport?

The argument in favor sees an activity that requires a great deal of athleticism to perform a host of daredevil maneuvers that include flips, twists, and tosses, not to mention equal measures of control, balance, flexibility, and precision. Competitions for national high-school cheerleading championships are as demanding and heated as the win-or-go-home March Madness in the college Division I basketball tournament. Or, as Adams State College cheerleading coach Valerie Hagedorn put it in The New York Times last year: “We don’t throw balls, we throw people. And we catch them.” It certainly sounds like a sport.

But cheerleaders still serve the function that earned them their name decades ago: They’re on the sidelines to lead cheers for the sports team out on the field. In that role, they’re not competing against another team with a win or a loss at stake. They’re supposed to get fans out of their seats and generate excitement. Off the field, they continue to provide team support, meeting with fans and performing at alumni functions and other events. None of that could be considered, in itself, a sport.

Currently, 29 of the 50 state high-school associations classify cheerleading as a sport, but there is a strong argument for elevating cheerleading to such a designation at all levels— creating cheerleading programs focused specifically on competition would be another step in giving women athletic opportunities equal to those of men.

Traditional cheerleading has its athletic elements, but because participants are supporters and not exclusively competitors, it doesn’t fit the definition of a sport by the Office for Civil Rights. But imagine a type of cheerleading that focused on a schedule of competitions in a format that would declare a winner and an eventual champion. In fact, two such sports are being developed in that vein. The first is known as “acro”—short for acrobatics and tumbling. On the college level, athletes wear numbered uniforms instead of traditional short skirts and give performances that resemble gymnastic floor routines. Eight universities with acro teams are listed on the National Collegiate Acrobatics and Tumbling Association’s site, including the University of Oregon. The other sport, developed by USA Cheer, is known as “stunt.” Teams go head-to-head, side-by-side, with 23 schools listed in the rankings as participants in routines involving partner stunts, pyramids, basket tosses, jumps, and tumbling skills, according to the College Stunt Association’s webpage.

Both stunt and acro are looking for the National Collegiate Athletic Association (NCAA) to deem them an “emerging sport,” since their activity removes the facets of cheerleading (such as rooting on a team) that aren’t considered athletic. That would go a long way in helping schools comply with Title IX, the landmark legislation passed 40 years ago requiring equal opportunities in athletics and education for both men and women—especially in light of a 2010 court ruling that competitive cheerleading did not count toward meeting Title IX requirements.

The case began in 2009, when Quinnipiac University in Connecticut tried to count competitive cheerleaders as athletes for its Title IX requirements and cut the women’s volleyball team. The school also tried to get around Title IX by counting female runners who joined Quinnipiac’s indoor, outdoor, and cross country track teams three times instead of just once. The volleyball coach sued and won the case: The ruling stated that Quinnipiac had engaged in gender discrimination. In August, an appeals court upheld the lower court’s ruling.

The point of the case was not that cheerleaders aren’t athletic. One of the results, aside from upholding the tenets of Title IX, was to show what competitive cheerleading would need to become to count as a sport equal to those played by male athletes, with requisite schedules, fully formed rules, and championships.

As stunt and acro continue to develop, they await the NCAA’s decision on whether they qualify as an emerging sport. If they do and a school starts a team of its own, those athletes would then help fulfill that institution’s Title IX requirements. According to Erin Buzuvis, a professor of law at Western New England University School of Law who blogs about Title IX, while a school could theoretically cut another women’s team and replace it with competitive cheerleading, it could only do so if it stayed in proportion between men’s and women’s athletes. But, as she points out, having enough female athletes is a problem for many schools, so replacing another sport with cheerleading likely wouldn’t happen.

“There’s still a big gap between what boys and girls have, and schools need to add women’s sports,” says Nancy Hogshead-Makar, senior director of advocacy at the Women’s Sports Foundation. “They’re not in the position of being able to drop sports. Right now, the gap is women are 54 percent of the college student population, but they’re only 45 percent of the college athletics education opportunities.”

The New York Times reported in 2011 about the practices universities use to comply with Title IX—which include such as loopholes as counting men who practice with women’s basketball teams as female athletes. Adding a sport for women would help schools comply with Title IX and expand opportunities for female athletes. In addition, recategorizing competitive cheerleading means, as Buzuvis says, “creating a new sport that … for once, isn’t just the female equivalent of a men’s sport, but a sport that’s developed around women’s participation and women’s enthusiasm for the activity.”

Another argument for categorizing cheerleading as a sport is safety. Last month, the American Academy of Pediatrics (AAP) reported that 66 percent of catastrophic injuries—defined as including “closed-head injury, skull fractures and cervical spine injuries resulting in permanent brain injury, paralysis, or death”—to high-school female athletes in the last quarter-century came from cheerleading. The study’s authors suggested that designating cheerleading as a sport would bring it under the “rules and regulations set forth by sports governing bodies … and school athletic departments,” thereby helping participants get the kind of athletic training, facilities, and coaches necessary to treat and prevent injuries.

Although the study has been disputed—Jim Lord, the executive director of the American Association of Cheerleading Coaches & Administrators, says the AAP report ignored more recent studies showing that catastrophic cheerleading injuries have dropped significantly in the past ten years and that emergency room visits for cheerleading injuries (37,000 for females ages 6 to 22 in 2011) were still fewer than for basketball (nearly 95,000), soccer (70,000), and softball (53,000)—giving competitive cheer the same resources and regulations as other athletic programs would improve safety, something the cheerleading association has already been pushing for. Many of the suggestions being made by the AAP, Lord told Reuters, are “actually stuff we’ve recommended for quite a while.”

Anyone who doubts that acro or stunt could be considered a sport needs only to watch a routine. All either athletic program needs is the stamp of approval from the NCAA to make it official, benefitting participants as well as institutions that start a team. Cheerleaders don’t just have to stand on the sidelines and use their athleticism solely to get a crowd loud during a sporting event—they can be the main event. The NCAA has a chance to give female athletes around the nation more opportunities. And that’s something worth cheering about.