Rice vs. Rice: What changed for John McCain since 2004? 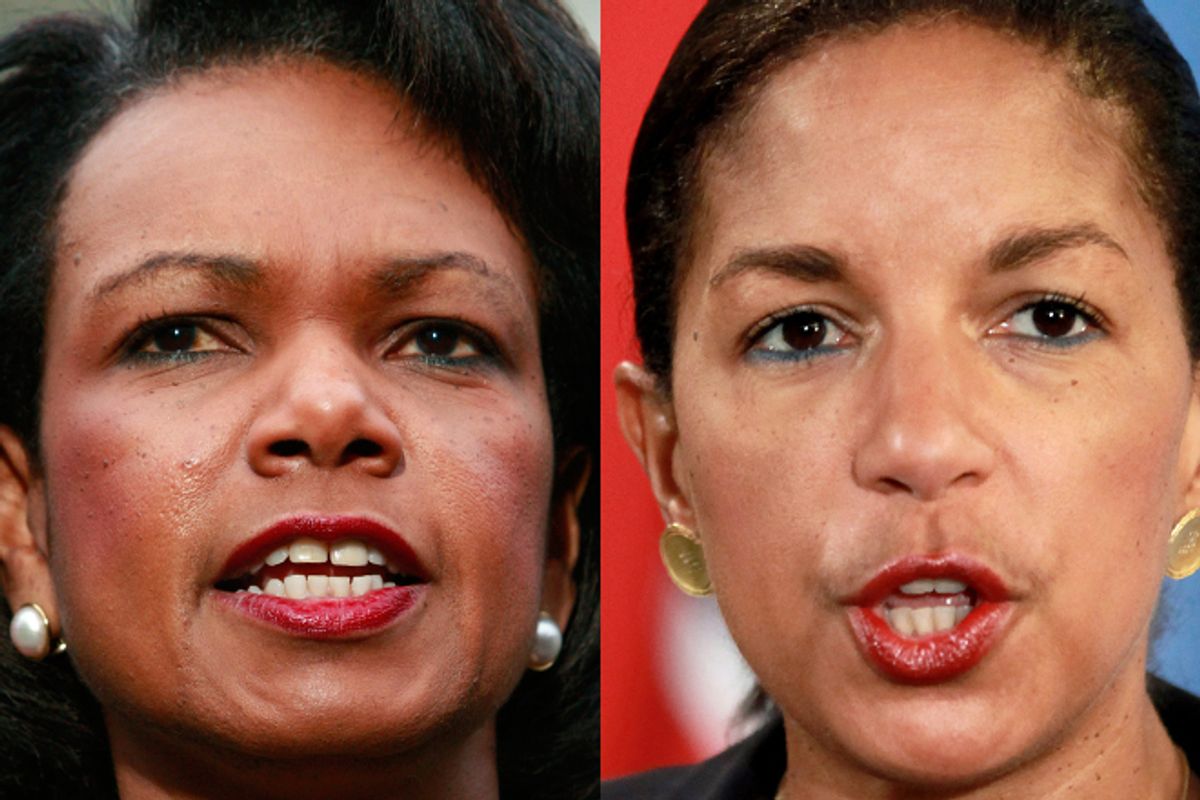 The president has just been reelected and looks to replace his secretary of state with a Ms. Rice who has already served in a senior administration position. The minority party in the Senate is threatening to obstruct her confirmation because she propagated faulty intelligence. The administration defends her, saying she merely recited the most credible intelligence of the moment and had no intention of misleading anyone, but the senators’ questions persist.

No, that's not today! That was eight years ago when George W. Bush appointed his national security adviser, Condoleezza Rice, to be the nation’s top diplomat a week after winning reelection.

Today, for the second straight day, President Obama's U.N. ambassador, Susan Rice, whom he may nominate to be secretary of state, met with recalcitrant Republican senators on Capitol Hill to try to assuage them. And today, for the second straight day, the Republican senators immediately found reporters and informed the world that they were not satisfied. Today it was Republican Sens. Susan Collins and Bob Corker. Yesterday it was Sens. Kelly Ayotte and Lindsey Graham, along with the ringleader of the opposition, Sen. John McCain. The senators say that Rice misled the American people when she went on Sunday morning political talk shows after the Sept. 11 Benghazi attack and, citing talking points provided to her by the intelligence community that later proved to be false, said the attack grew out of a protest against an anti-Islam film.

Eight years ago, when Bush appointed Condoleezza Rice in 2004, Democrats said that she misled the American people when she propagated intelligence that later proved to be false. In her case, it was about Iraq’s alleged weapons of mass destruction. She also sent a letter to Senate Democrats in March 2003 claiming that the U.S. had briefed U.N. weapons inspectors on what they knew about Iraq's WMD program (they had not). And Democrats also charged that she concealed the CIA’s doubts about whether Iraq had sought uranium from Niger -- she said there was "consensus" within the administration when in fact there was not; the story turned out to be false.

So what did the Republican senators questioning Susan Rice today say about the Condoleezza Rice committing the very same alleged crime then? A Nexis search turns up nothing from Collins or Graham of relevance. (Ayotte and Corker were not yet in the Senate.) McCain actually defended her. All three then-senators voted for her confirmation.

Whereas McCain is today giving the intelligence community the benefit of the doubt and placing the blame on Susan Rice, in 2004 his finger was pointed squarely at the intelligence community. “The president of the United States was told by the director of intelligence that the weapons of mass destruction information was a ‘slam dunk ... So it was great failures, and we all know that the CIA has to be reformed,” McCain said on "Meet the Press" in November 2004 while discussing Rice's nomination. A few days later he told Lou Dobbs on CNN: “I serve on the Commission on Weapons of Mass Destruction, and there is no doubt that the CIA is dysfunctional and there needs to be significant and fundamental changes made.”

During Rice's confirmation hearings, where Democrats grilled her on the faulty intelligence, Rice echoed McCain. “Obviously, there were problems with the intelligence concerning Iraq (and) weapons of mass destruction,” Rice said.

But she should not be held responsible for their mistake, she explained. Asked why she told everyone in the lead-up to the war that Saddam Hussein was reconstituting his nuclear weapons program, Rice replied: “The majority of agencies in the intelligence community did. I was representing, Senator -- and I've made this available for the record -- the views of that majority.” She even expressed outrage at the CIA’s failure: “We cannot have a situation where the director of the CIA, when asked about Iraq, weapons of mass destruction, tells the president of the United States that it's a quote, ‘slam dunk,’ when nothing could have been further from the truth.”

This is essentially the same argument Susan Rice is making today (though with far less finger wagging at the CIA). The difference is that Republicans were willing to believe it when Condoleezza Rice said it, and not willing to cut Susan Rice the same slack.

You’ll see none of the same calls from Republicans today in regards to McCain’s more acute impugning of Susan Rice’s integrity and honesty. The Benghazi attack was a tragedy. The Iraq war was an enormous disaster of global and historic importance. Yet when Democrats delayed the first Rice’s confirmation vote a week to have more debate, White House chief of staff Andrew Card dismissed Democrats’ concerns as "petty politics" and urged senators to stand down. What changed? Party affiliation.