The attacks were is a Damascus suburb 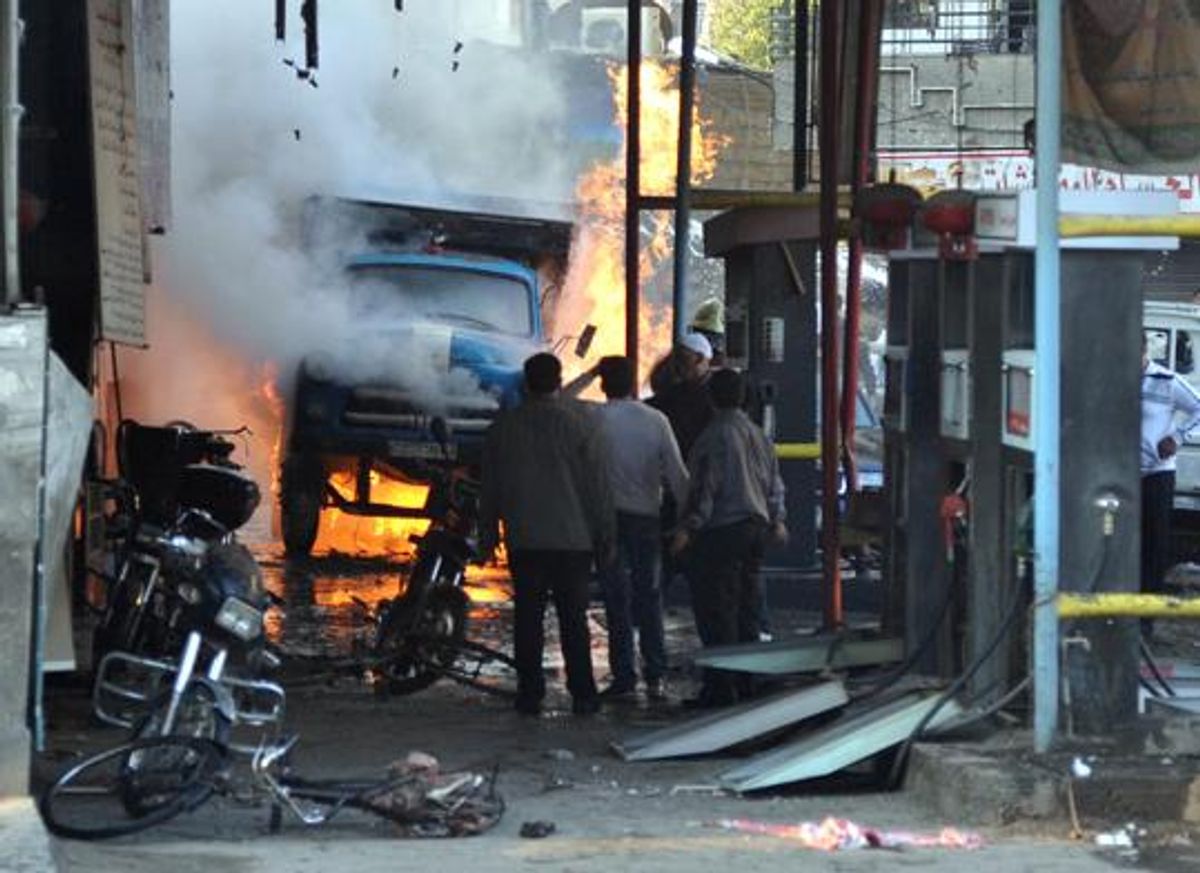 Syrian citizens stand near a burning truck that was destroyed by two cars bombs. (AP/SANA)
--

The state news agency, SANA, said two cars packed with explosives detonated early in the morning in the eastern Jaramana suburb, a district that is mostly loyal to President Bashar Assad. The area is populated mostly by Christians and Druse, a minority sect.

A series of blasts have struck regime targets in Damascus and elsewhere since last December, raising fears of a rising Islamic militant element among the forces seeking to topple Assad.

Wednesday’s car bombs went off in a parking lot located between two commercial buildings. They were detonated within five minutes of one another as groups of laborers and employees were arriving to work.

The blasts shattered windows in nearby buildings, littering the street with glass and debris. Human remains were scattered on the pavement amid pools of blood.

After the first explosion, people rushed to the site to help the injured and then the second bomb went off, said Ismail Zlaiaa, 54, who lives in the neighborhood.

‘‘It is an area packed with rush-hour passengers,’’ he said, and added: ‘‘God will not forgive the criminal perpetrators.’’

Ibtissam Nseir, a 45-year-old school teacher, said the bombing struck minutes before she set off for work. She said there were no troops around the district and wondered why the attackers would target it. Nseir blamed opposition fighters for the attack.

‘‘Is this the freedom which they want? Syria is a secure country and it will remain so,’’ she said.

There were conflicting reports about the death toll. Two hospital officials, speaking on condition of anonymity because they were not authorized to talk to the media, said at least 30 bodies were brought to two nearby hospitals. The Britain-based Observatory for Human Rights, which relies on reports from the ground, said 29 people were killed.

The different tolls could not immediately be reconciled. The regime restricts independent media coverage.

Syria’s conflict started 20 months ago as an uprising against Assad, whose family has ruled the country for four decades. It quickly morphed into a civil war, with rebels taking up arms to fight back against a bloody crackdown by the government. According to activists, some 40,000 people have been killed since March 2011.

Assad blames the revolt on a conspiracy to destroy Syria, saying the uprising is being driven by foreign ‘‘terrorists’’ — a term the authorities use for the rebels — and not Syrians seeking change.

Analysts say most of those fighting Assad’s regime are ordinary Syrians and soldiers who have defected, disenchanted with the authoritarian government. But increasingly, foreign fighters and those adhering to an extremist Islamist ideology are turning up on the front lines. The rebels try to play down the Islamists’ influence for fear of alienating Western support.

There was no immediate claim of responsibility for Wednesday’s bombings.

Rebels fighting to topple Assad are predominantly members of the Sunni Muslim majority. In their push to take Damascus, they have frequently targeted state institutions and troops around the country. They have also often hit districts around the capital with the country’s minority communities, perceived to be allied with Assad’s Alawite sect, an offshoot Shiite group that dominates the regime.

Downtown Damascus — the seat of Assad’s power — has also seen scores of car bombs and mortar attacks that have targeted state security institutions and troops, areas with homes of wealthy Syrians, army officers, security officials and other members of the regime.

In May, two suicide car bombers blew themselves up outside a military intelligence building in Damascus, killing at least 55 people. In July, a bomb hit a building in which Cabinet ministers and senior security officials had been meeting, killing the defense minister and his deputy, who is also Assad’s brother-in-law. A former defense minister also died in the attack.

Elsewhere, 50 soldiers were killed when a suicide bomber detonated his explosives-laden car near an army checkpoint in Hama province on Nov. 5 in one of the deadliest single attacks targeting pro-Assad troops during the 20 months of conflict.

Jaramana district has been frequently targeted in the past weeks, as the rebels push their way into the capital. Ten people were killed and 41 were injured when a car bomb exploded in the district earlier this month.