I was a "male spinster"

For 40 years, I was an incorrigible bachelor who didn't need marriage. But eventually, I wanted it 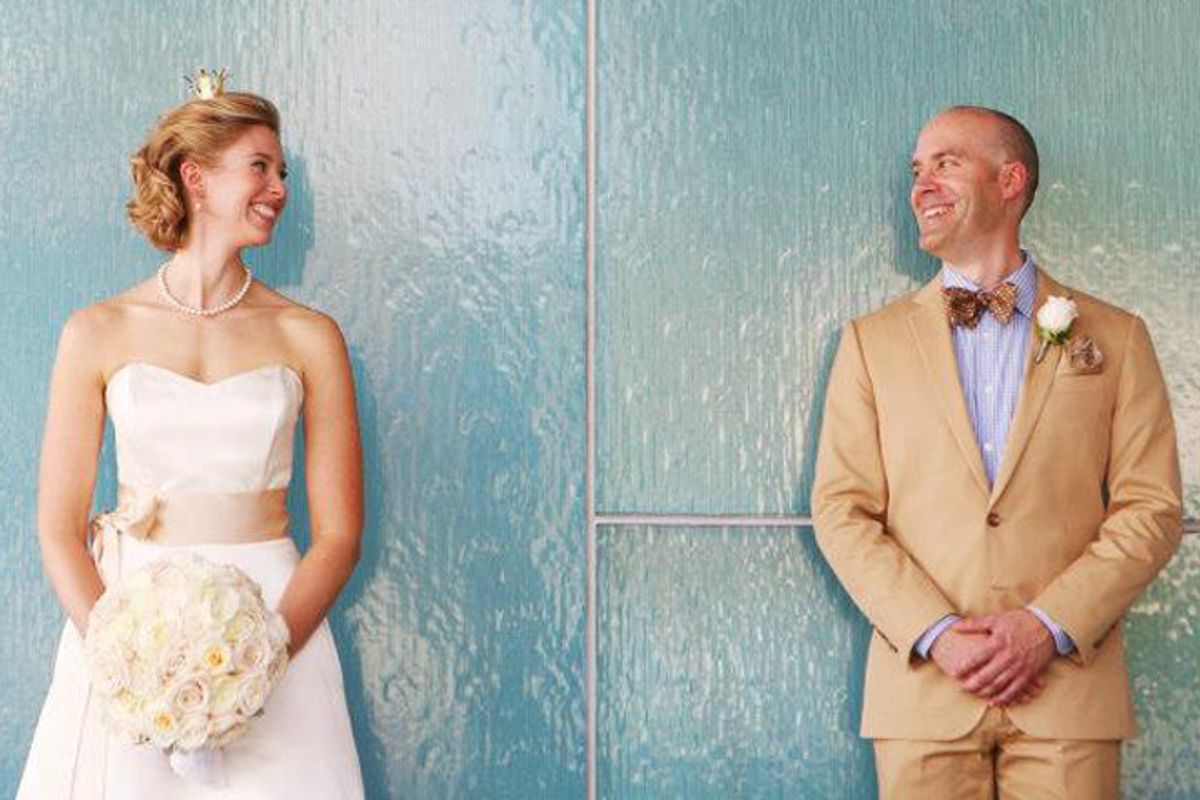 The author with his wife, Lucy (Studio Laguna)
--

At the wedding of my younger brother, in 2000, someone mistook me for the groom. And my father, with a laugh I’ve always wondered about, jerked his thumb at me and said, “Him? He’s never getting married.”

I’m still not sure how he meant it. Was I too inept? Too cool? Or was it just an awkward response to an awkward situation? My father couldn’t swallow small talk, no matter how small and harmless, and that day he was choking down a lot of it.

Whatever the case, this dubious declaration would hang over my head for a dozen years. Until I was 40, I was no closer to matrimony than the day I was born.

To be fair, a few things were working against me — mostly myself. For example, I used to have animals in my apartment. Not pets, unwanted wildlife: bats, rats, squirrels. One place had so many bats that the supervisor’s 3-year-old boy would run up and down the halls, naked, trying to catch them with a butterfly net. One afternoon I came home to find an obese squirrel squatting on my dining-room table, scarfing a nut. He didn’t move when I approached, and it dawned on me that he had probably been here before, gotten comfortable, maybe ordered cable, and I shivered with primordial panic: Whose place was this, theirs or mine? I was living that close to the line.

The only vacuum I ever owned was a Shop-Vac: wet/dry, with a long wide hose and a tank like R2D2, because if you wait long enough to clean there are no small messes. Came in handy one spring when the fruit flies got out of hand — sucked them right out of the air. My messes could fly like that.

I’m not proud. I was just a guy alone. And when bachelorhood stretches beyond the wide-open days of video games and peanut bars toward the narrowing maw of mid-life, you lose a little perspective. You do some things that would not have crossed the mind of a married man, sometimes with a backpack alone in some sketchy corner of the world, sometimes with your clothes off, not so alone.

I once wound up at the Grand Hyatt Hong Kong, overlooking the South China Sea, in the company of a young woman I’d known only from a few dozen emails. She lives in Brooklyn, I live in Minneapolis. But I had spotted her on a dating website when I forgot to enter my ZIP code and was presented with every woman everywhere looking for love. She was heading to Hong Kong for work. Why not meet there?

Why not, indeed. You do these things not because you can but because there’s no one around to say that you cannot. If you don’t marry your high-school sweetheart, your college sweetheart, or your Peace Corps sweetheart, you get creative, maybe reckless. By 40, you’ve dodged a few bullets, and all that bobbing and weaving has made you wiry, wild, a little feral.

Lucy describes me in those days as “intense” — lots of eye contact and unchallenged opinions, like a bird in a cage. This was in 2009, and after years of bumping into each other, I’d asked Lucy out. What she didn’t know was that I’d made up my mind to settle down. Because, make no mistake, it is a decision. My father had died the year before and whether it was the withering of his infamous pronouncement or the notion of stepping up, I’d prioritized a relationship. I would tell myself, while Lucy and I were driving or cooking or staring up at the ceiling half-asleep, “This is my wife” — to conjure that kind of closeness, to see how it felt — and three years later it’s true.

I have china now, which makes me nervous, like handling explosives. I have a Cuisinart and a waffle-maker and a clay butter dish shaped like a little house. I have a real house with no obvious portals for wildlife; I am, as I should be, the furriest creature inside it. I have, according to researchers, 250 percent better odds now of staying alive into my Bananagrams years.

I have a wife I love. But unlike people who marry at 22 or even 32, with some part of their adult experience still unformed, I have never thought that Lucy completes me. Or even that I’m happier than before. With no one to do it for me, I had already jury-rigged a life: a career, a circle of friends, a library card that I had every reason to believe would sustain me to the end — and happily so. Marriage at 40 is a lateral move.

I’m reminded of this whenever Lucy and I fight, because our fights are not the fast-moving thunderstorms of youth but the daily drizzle of realizing you did all of this before on your own, from cooking to cleaning to driving cross-country, and never once criticized yourself. You never held up an ostensibly washed dish to yourself and said, “Do you see what I see?” You never asked yourself to roll up the windows, turn down the music, and watch the merging traffic until you sat there, tense in the silent car, thinking, “I knew road trips and you’re no road trip.”

My father died in his 60s, my grandfather in his 50s, and when I was single I didn’t care so much if I followed suit. Now there’s a bit of pressure just to stay alive. I joined a gym, I drive like a 60-year-old lady, I don’t wait to find out what that noise is under the hood, and I never order the biggest steak on the menu. What if I only have 25 years? That’s barely enough time to get around to fixing the thermostat. Is it worth fighting over the optimal way to load the dishwasher? I don’t want my dying words to be, “But I thought that’s where the bowls go!”

Once I was lying on the floor listening to music and by the time Lucy found me there — spread-eagled, unmoving — her first thought was not, “Look at my handsome husband, resting after a long day,” but, “Crap, he’s dead.” We talk a lot about how and where we’d like to be disposed of, when the time comes. Because if one of us had something elaborate in mind, like the Taj Mahal, we’d have to get right on that.

These aren’t the typical thoughts of newlyweds. But then, it’s hard to believe how atypical we are. Lucy was only somewhat above the mean when she married me at 33. But a 40-year-old bachelor, despite the normalization of advanced singlehood, is still a rare comet in the dating universe. As recently as 1980, just 6 percent of men over 40 had never married. That’s the same percentage, according to one study, as the number of people who are sadistic drivers, going out of their way to hit animals on the road. They’re that rare, that weird.

The number of never-married 40-year-olds today has climbed to around 16 percent, but their reputation remains the same. The Huffington Post recently ran a column with the headline “Women Should Beware the Male Spinster,” positing the old trope that bachelors in their 40s are immature playboys who will never settle down, the floating scum of the dating pool. Commenters concurred, including a few “male spinsters” (most were from New York). It’s the George Clooney theory, though everyone except Talia Balsam forgets that even Clooney was married once, for three long years.

In a way, these naysayers are right: I didn’t need marriage, to settle down; I wanted it, to be unsettled. I wanted perspective, an escape from solipsism, a chance to apprehend new pleasures: security, partnership, "Downton Abbey." To say that marriage at 40 is a lateral move is not to say that I’ve risked nothing and there’s no romance in it, only that I’m no longer naive. I’m not risking what I don’t know, I’m risking what I do know, which is arguably more romantic. And that’s ultimately what gives me hope. I may be stuck in my ways, stuck in concrete even, but it’s the concrete of habit, not arrested development.

Recently, while we were eating dinner at the kitchen counter, the way I would’ve when I shared a place with squirrels, Lucy asked me, “Are you really no happier than before? Or have you just not figured out yet what you’ve got?”

No, I assured her, I’ve figured it out. I just need to be asking myself a different question: not whether I’m happier now than I was being single, but whether I’m happier now than I would be without her. It’s the only question that matters in any marriage. And I have no reason to think that the answer won’t be yes for the graying, balding, prostate-pondering rest of my life.

Tim Gihring is the senior editor of Minnesota Monthly magazine and a former reporter for the Associated Press. His essays have appeared in "Best Food Writing" and "Before the Mortgage: Real Stories of Brazen Loves, Broken Leases, and the Perplexing Pursuit of Adulthood."