Liberals double down: No entitlement cuts

As reports of a "grand bargain" emerge, Rep. Keith Ellison and the Progressive Caucus refuse to budge 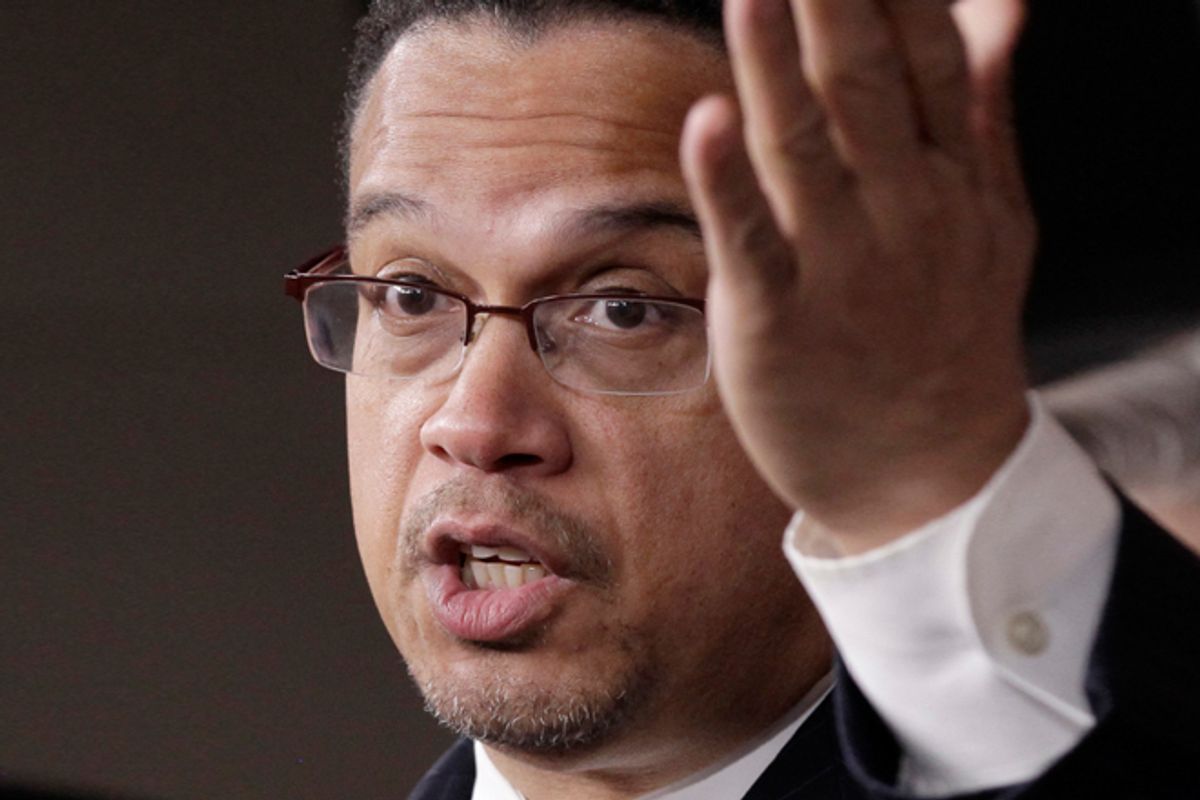 In a story already making waves across Washington, Politico’s Jim VandeHei and Mike Allen reported this morning that a bipartisan “grand bargain” is emerging from talks between the White House and Republicans. The contours of the deal are this: About $1.2 trillion in new tax revenue, most likely from an rate increase on income over $250,000, along with at least $400 billion over 10 years in entitlement cuts “and perhaps a lot more,” mostly from Medicare.

Liberals have drawn a hard line against entitlement cuts and $400 billion is a lot of money, so some progressives are not pleased with the idea.

Democratic Rep. Keith Ellison, the chairman of the 77-member Progressive Caucus, told Salon that his members would not support entitlement cuts. “Any agreement to meet our end-of-the-year deadlines will need a large portion of the House Democratic Caucus to pass. Progressives will not support any deal that cuts benefits for families and seniors who rely on Medicare, Medicaid and Social Security to put food on the table or cover their health costs,” he said.

Outside groups took an even tougher line.

“If this report in Politico is correct, then some ‘senior Democrats’ are sorely misguided about where their base stands. So let me be crystal clear. Any benefit cuts in Medicare, Medicaid, or Social Security, including raising the retirement or eligibility age, are absolutely unacceptable,” Ilya Sheyman, the campaign director at MoveOn.org told Salon. “More than 80 percent of MoveOn's 7 million members say they want us to fight a deal that cuts those benefits, even if it also ends all of the Bush tax cuts for the top 2 percent. And that's a mainstream position everywhere except in the lobbyist-cash-infused D.C. cocktail circuit,” Sheyman continued.

There will be consequences, he warned, for Democrats who support a deal that cuts entitlements. “Bottom line: Any Democrat who votes to cut Medicare, Medicaid or Social Security benefits does so at his or her own peril, and shouldn't be in the least bit surprised to be held accountable by MoveOn members in the next primary election.”

However, there's an important caveat that's missing from the deal described by Politico. While Ellison and progressives have said they oppose benefit cuts, they’re open to other means of cutting costs in entitlement programs. “There are better options that protect seniors, children and disabled Americans,” Ellison said, citing the elimination of the income cap on Social Security taxes or letting Medicare negotiate drug prices with pharmaceutical companies, something Illinois Democratic Sen. Dick Durbin also floated yesterday.

The details of the cuts in the Politico article were vague, and it's unclear if they represents real cuts to benefits or not. “That’s a crucial distinction,” said Adam Green, the co-founder of the Progressive Change Campaign Committee. “What’s worried some about the Politico article is that it kind of tossed in reforms or efficiencies along with talk about raising the Medicare retirement age or adjusting the cost of living adjustment -- those two things would essentially start a nuclear war on the left,” Green said. “Those are the two big things. Those are benefit cuts. Those actively hurt seniors.”

But Green said he was encouraged by Durbin’s speech yesterday, and he doesn’t think raising the retirement age is a real possibility. The cost of living adjustment is another matter.

That is wonky, but important and represents a shift of billions of dollars, so stick with us. Basically it comes down to how you calculate the cost of living adjustment (COLA), which is meant to ensure benefits keep pace with inflation. Inflation is measured by looking at the change in the price of a basket of common consumer goods, which creates a measure called the Consumer Price Index (CPI).

There are lots of slightly different variations of the CPI, and liberals fear the final deal will shift from the current measure -- called the CPI-W -- to a different measure called the chained CPI. Many economists agree the CPI-W overstates inflation, so some people want to change that formula, which would save Social Security money. The chained CPI has emerged as the most likely replacement. It assumes that beneficiaries will change the goods they purchase as prices change (e.g. if chicken prices go up, they’ll buy more beef), but liberals and some economists say that this change isn’t fair to Social Security beneficiaries. They warn that it represents a devastating cut to monthly checks and that it’s not practical to assume that seniors will adjust to cuts by constantly altering their spending habits in response to subtle price variations.

That said, it’s entirely possible that a grand bargain remains out of reach, but that Democrats were happy to have Politico run a story showing their willingness to make serious entitlement cuts. When the deal falls apart, they can boast that they made a good faith effort to work with Republicans, despite the protestations of their base.

Indeed, House Speaker John Boehner just told reporters that “no substantive progress” had been made in fiscal cliff talks, despite the story.

In this, perhaps conspiratorial scenario, the $400 billion trial balloon would be designed precisely to elicit angry liberal responses such as those above, so as to make Democrats seem at once more reasonable and less able to make a GOP-favored deal. It should be stated that there is zero evidence supporting this notion and there's plenty of evidence to suggest that Obama really does want to cut entitlements, but planting the story would be classic “triangulation” -- and Obama seems to understand how to play this game a lot better than he did during last year’s budget talks.