Why are we testing newborns for pot? 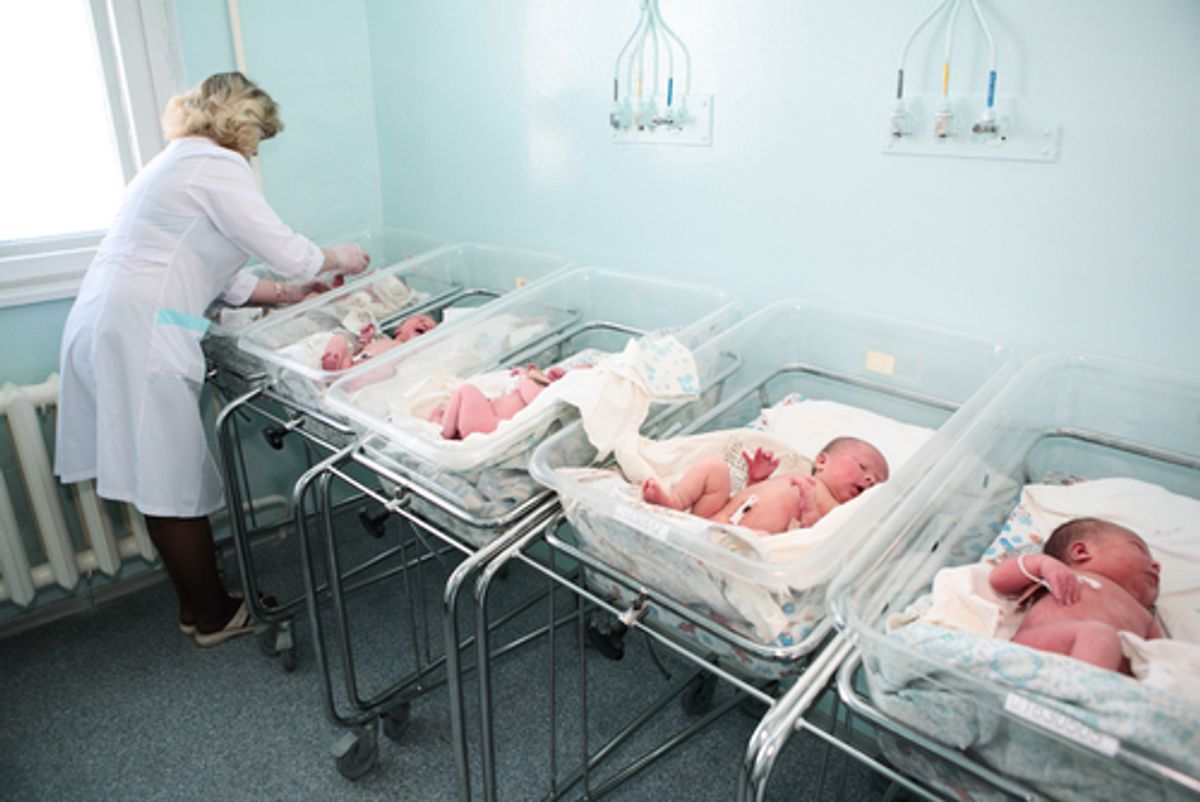 Employees at US hospitals are testing more and more newborns for cannabis exposure. And, with alarming frequency, they are getting the wrong results. So say a pair of recent studies documenting the unreliability of infant drug testing.

In the most recent trial, published in the September edition of the journal Clinical Chemistry, investigators at the University of Utah School of Medicine evaluated the rate of unconfirmed 'positive' immunoassay test results in infant and non-infant urine samples over a 52-week period. Shockingly, authors found that positive tests for carboxy THC, a byproduct of THC screened for in immunoassay urine tests, were 59 times less likely to be confirmed in infant urine specimens as compared to non-infant urine samples. Overall, 47 percent of the infant 'positive' immunoassay urine samples evaluated did not test for the presence of carboxy THC when confirmatory assay measures were later performed.

Immunoassay testing – the standard technology utilized in workplace drug testing – relies on the use of antibodies (proteins that will react to a particular substance or a group of very similar substances) to document whether a specific reaction occurs. Therefore, a 'positive' result on an immunoassay test presumes that a certain quantity of a particular substance may be present in the sample, but it does not actually identify the presence of the substance itself. A more specific chemical test, known as chromatography, must be performed in order to confirm any preliminary analytical test results. Samples that test positive on the presumptive immunoassay test, but then later test negative on the confirmatory test are known as false positives.

For example, in April, researchers at the University of North Carolina reported in the journalClinical Biochemistry that various chemicals present in various baby wash products, such as Johnson's Head-to-Toe Baby Wash and CVS Baby Wash, frequently cross-react with the immunoassay test to cause false positive results for carboxy THC. “[The] addition of Head-to-Toe Baby Wash to drug-free urine produced a dose dependent measureable response in the THC immunoassay,” the investigators concluded . “Addition of other commercially available baby soaps gave similar results, and subsequent testing identified specific chemical surfactants that reacted with the THC immunoassay. … Given these consequences, it is important for laboratories and providers to be aware of this potential source for false positive screening results and to consider confirmation before initiating interventions.”

Following the publication of the UNC study, researchers at the University of Utah screened for the presence of baby soap contaminants in infant urine. Surprisingly, they didn’t find any . Rather, they concluded that the disproportionately high rate of false positive test results discovered among their samples were the result of a cross-reaction with some other, yet to be determined constituent. They cautioned: “Until the compounds contributing to positive urine screen results in infants are identified, we encourage the use of alternative specimens for the detection and investigation of neonatal exposure to cannabinoids. Screen-positive cannabinoid results from infant samples should not be reported without confirmation or appropriate consultation, because they cannot currently be interpreted.”

Yet despite these warnings, in many instances, hospitals fail to confirm the results of presumptive drug tests prior to reporting them to state authorities. (Because confirmatory testing is more expensive the immunoassay testing, many hospitals neglect to send such presumptive positive urine samples to outside labs for follow up analysis.) Ironically, such confirmatory tests are required for all hospital employees who test positive for illicit substances. But presently, no such guidelines stipulate that similar precautions be taken for newborns or pregnant mothers. Explains Lynn Paltrow, Executive Director of the organization National Advocates for Pregnant Women : “NAPW has had calls from numerous parents who were subjected to intrusive, threatening, and counterproductive child welfare interventions based on false or innocent positive test results for marijuana. We have learned that pregnant patients receive fewer guarantees of accuracy than do job applicants at that same hospital.”

Regardless of whether or not the drug screen results are confirmed, the sanctions for those subjects who test positive are often swift and severe. Typically, any report of alleged infant exposure to cannabis will trigger a host of serious consequences ranging from the involvement of social services to accusations of child endangerment or neglect. In some instances, mothers whose infants test positive for carboxy THC will lose temporary child custody rights and be mandated to attend a drug treatment program. In other instances they may be civilly prosecuted. At least eighteen states  address the issue of pregnant women’s drug use in their civil child neglect laws; in twelve states prenatal exposure to any illegal drug is defined by statute as civil child abuse. (One state, South Carolina, authorizes the criminal prosecution of mothers who are alleged to have consumed cannabis, or any other illicit substance, during pregnancy and carry their baby to term.)

Of further concern is the reality that the hospital staff’s decision to drug test infants or pregnant mothers appears to be largely a subjective one. There are no national standards delineating specific criteria for the drug testing of pregnant women, new mothers, or their infants. In fact, the only federal government panel ever convened to advise on the practice urged against its adoption. As a result, race and class largely influence who is tested and who isn’t. For example, a study  published in the Journal of Women's Health reported that "black women and their newborns were 1.5 times more likely to be tested for illicit drugs as non-black women," after controlling for obstetrical conditions and socio-demographic factors, such as single marital status or a lack of health insurance. A separate study published in The New England Journal of Medicine reported similar rates of illicit drug consumption during pregnancy among both black and white women, but found that “black women were reported [to health authorities] at approximately 10 times the rate for white women.”

How many mothers have been accused of child neglect or abuse because of false positive drug test results? Nobody knows for sure. But no doubt some mothers have been penalized solely as a result of the test’s inherent fallibility – and many more are likely to face similar sanctions in the future. That’s because the practice of drug testing infants for cannabis exposure remains a relatively popular even though there exists limited, if any, evidence to justify it.

“No child-health expert would characterize recreational drug use during pregnancy as a good idea,” writes Time.com columnist Maia Szalavitz. “But it’s not at all clear that the benefits, if any, of newborn marijuana screening – particularly given how selectively the tests are administered – justify the potential harm it can cause to families.”

Richard Wexler, executive director of the National Coalition for Child Protection Reform agrees, telling Time.com that the emotional damage caused by removing an infant child from their mothers, as well as the risk of abuse inherent to foster care, far outweigh any risks to the child that may be caused by maternal marijuana use during pregnancy.

In fact, the potential health effects of maternal marijuana use on infant birth weight and early development have been subject to scientific scrutiny for several decades. One of the earliest and most often cited studies on the topic comes from Dr. Melanie Dreher and colleagues, who assessed neonatal outcomes in Jamaica, where it is customary for many women to ingest cannabis, often in tea, during pregnancy to combat symptoms of morning sickness. Writing in the journal Pediatricsin 1994, Dreher and colleagues reported  no significant physical or psychological differences in newborns of heavy marijuana-using mothers at three days old, and found that exposed children performed better on a variety of physiological and autonomic tests than non-exposed children at 30 days. (This latter trend was suggested to have been a result of the socio-economic status of the mothers rather than a result of pre-natal pot exposure.)

Separate population studies have reported similar results. A 2002 survey  of 12,060 British women reported, “[C]annabis use during pregnancy was unrelated to risk of perinatal death or need for special care.” Researchers added that “frequent or regular use” of cannabis throughout pregnancy may be associated with “small but statistically detectable decrements in birthweight.” However, the association between cannabis use and birthweight failed to be statistically significant after investigators adjusted for confounding factors such as the mothers' age, pre-pregnancy weight, and the self-reported use of tobacco, alcohol, caffeine, and other illicit drugs.” A 1999 survey  of 12,885 Dutch mothers reported similar findings after controlling for maternal tobacco use. “The use of cannabis is not a major prognostic factor regarding the outcome of pregnancy,” the authors concluded. A 1997 meta-analysis  of 32,483 mothers published in the journal Addiction also reported, “There is inadequate evidence that cannabis, at the amount typically consumed by pregnant women, causes low birth weight.” Most recently, a 2010 population-based study  by the Centers for Disease Control and Prevention reported similar outcomes. Investigators with the National Center on Birth Defects and Developmental Disabilitiessurveyed mothers who delivered live-born infants without birth defects between 1997 and 2004. After adjustment for potential confounding factors, researchers concluded that “cannabis use was not associated with mean birth weight or gestational age or with low birth weight or preterm delivery.”

Longitudinal data assessing the potential impact of pre-natal cannabis exposure on a child’s neurobehavioral and cognitive functioning is less definitive. While some studies have reported  an adverse association between frequent prenatal marijuana exposure and childhood intellectual development, particularly in the realm of ‘executive functioning ', other studies evaluating less frequent maternal marijuana use have reported no such deficits in infant development or increased risk  of psychiatric disorders. Further complicating interpretation of this data is that researchers are typically unable to determine whether these outcomes are the result of cannabis exposure or other pre-natal or post-natal environmental factors. However, among the studies reporting a potential adverse association, authors often affirm these effects tend to be subtle and that they are far less significant than those outcomes associated with the maternal use of alcohol or tobacco.

Nonetheless, this lack of hard data demonstrating definitive dangers associated with the intermittent maternal use of cannabis has not stopped others in the field from proclaiming that any infant exposure to cannabinoids may lead to a variety of unproven detrimental outcomes – including childhood hyperactivity and sudden infant death syndrome. (In reality, preclinical studies have documented that the activation of cannabis receptors as well as the production of the endogenous cannabinoids are essential for proper prenatal and post-natal development, in particular the stimulation of appetite   and proper digestion.) Such claims have no doubt fostered the present environment whereby stiff legal penalties and/or the loss of parental rights exist for mothers who are alleged to have consumed cannabis during pregnancy. Moreover, child protective services are also now proactively removing children from the homes of families who use cannabis – even in cases where the parent’s use is in compliance  with state law. And in at least one state, Arizona, pediatric groups are seeking   additional legislation to “prevent pregnant women from receiving recommendations for marijuana; require physicians who recommend marijuana to ask patients if they are pregnant; and require women to submit to pregnancy tests when seeking [medicinal cannabis] recommendations.”

Nonetheless, as long as most states, and the federal government in particular, continue to define cannabis as a Schedule I prohibited substance, one can expect that state regulators, prosecutors, and hospital staff will continue to overzealously and selectively target suspected marijuana consuming mothers and their children – regardless of whether such interventions are scientifically warranted or in the best interest of the child.