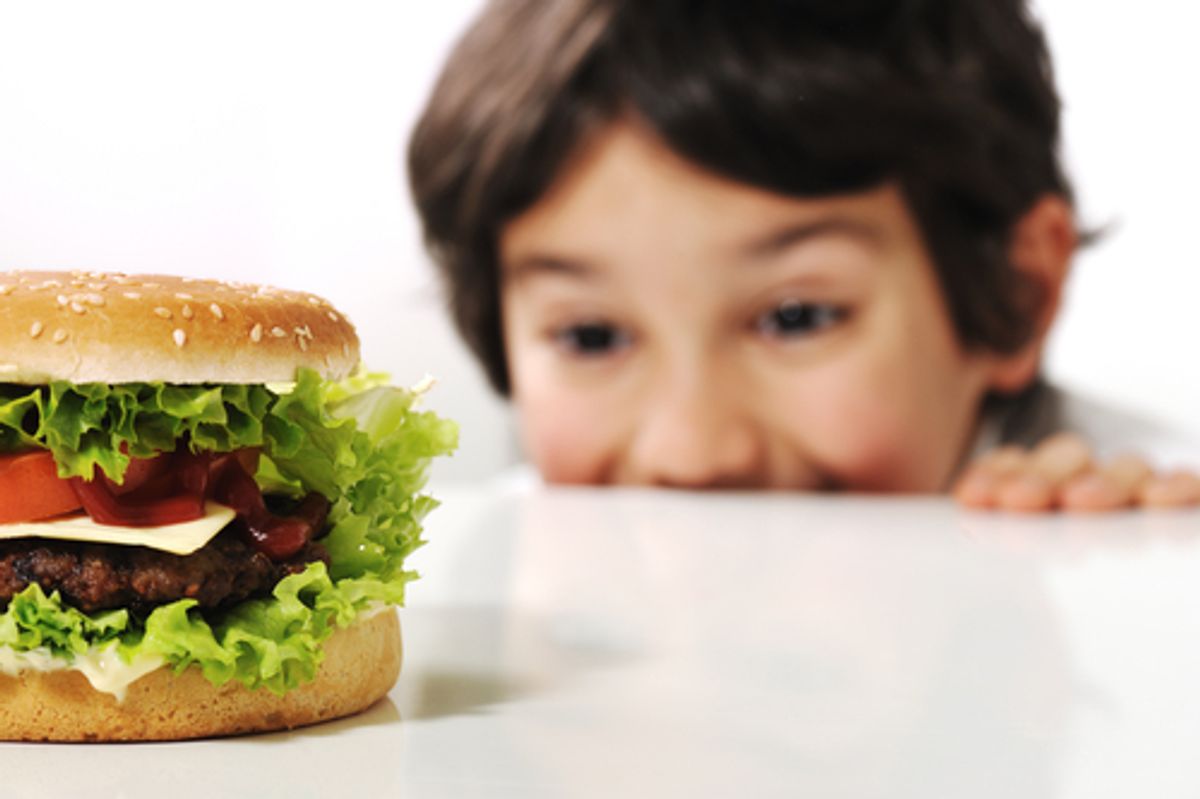 This article originally appeared on AlterNet. It was published in partnership with GlobalPossibilities.org.

Ever wonder why one-third of all children in the United States are overweight, if not dangerously obese? According to a slew of recent reports, the cornucopia of junk food advertising to children plays a substantial role in creating this public health crisis. From bribing children with toys and sweepstakes to convincing them to eat a “fourth meal,” the industry is glutted with examples of perverse, profit-chasing schemes to capitalize on children’s appetites at the expense of their long-term health. Here are 7 most perverse trends in junk food advertising to children.

Junk food marketing to children and adolescents has become billion-dollar industry. According to 2006 data, the most recent numbers available, kids experience at least $1.6 billion worth of food advertising a year--the vast majority of the ads geared toward pushing high-calorie and low-nutrition snacks down kids’ throat.

The vast majority of these ads are specifically geared towards children, using tricks like cartoon characters and sweepstakes prizes to make the sugary cereals and fatty hamburgers all the more attractive. As children’s online activity has risen, massive corporations like McDonald’s have also designed child-focused websites, complete with video games that teach children brand recognition, that are getting hundreds of thousands of young visitors a month. In the month of February 2011, for example, 350,000 children under the age of 12 visited McDonald’s two main websites, HappyMeal.com and McWorld.com.

2. The ads, not the TV, are what's making kids fat

While many have complained that sedentary television culture is causing the childhood obesity crisis, new studies suggest that the real culprit may be the constant ads for junk food that children are viewing during commercial break--not the television programs themselves.

A 2006 Institute of Medicine government report stated, “It can be concluded that television advertising influences children to prefer and request high-calorie and low-nutrient foods and beverages.”

Even clearer evidence comes from a long-term study in Quebec, where fast food advertising geared specifically toward children has been banned both online and in-print for the last 32 years. There, researchers discovered that the province has the least childhood obesity of anywhere in Canada, and that the ban decreased children’s consumption by an estimated two to four billion calories.

In Britain, the president of the Royal College of Pediatrics and Child Heath, has also a dvocated for the state to ban junk food advertisements on television until after 9 pm, when the majority of children are already asleep.

How fat are these television advertisements making kids? According to one recent study, their effects are surprisingly heavy. The experiment compared children’s food consumption while watching television programs with food commercials, versus programs that ran straight through without any ads. It concluded that kids consumed almost 50 percent more calories while watching the 30-minute program with commercials--a total of almost 100 calories in only a half an hour. Over the course of a year, that would lead to a 10-pound weight gain.

4. Children clueless while industry cashes In

One of the biggest problems with child-specific advertising is that young kids aren’t even able to recognize the commercials for what they are: short segments intended to sell them things. As the Food and Water Watch Report explains , children under the age of four can’t even recognize the difference between a television show and the commercials--the line between content and advertising is completely invisible to them. Children between four and eight may understand that advertisements are different from the T.V. program, but they still don’t recognize that ads are paid commercials intended to convince them to buy something.

However, just because children can’t recognize the ads for what they are doesn’t mean that these commercials don’t affect them. Studies show toddlers are able to accurately identify brand logos and that young children prefer food wrapped in McDonald’s packaging.

A study of one child-geared advertising campaign, launched by Taco Bell, demonstrates how perverse this marketing really is. In 2006, Taco Bell launched a campaign to convince children to eat a “Fourth Meal,” which is after dinner and before breakfast. (Essentially, the fourth meal is at the time of night when children should be sleeping or doing their homework.)

The campaign kicked off with a website showing children in their pajamas wandering around outside and eating nachos, tacos and other late-night snacks offered by Taco Bell. The foods being marketed often had more than 400 calories, placing them squarely in the meal category. But the goal isn’t just to sell more tacos; it’s actually to carve out an entire new post-dinner market where the consumer base is young children.

Increasingly, these types of ads aren’t only on television and online; they are also in schools where the child-marking focus is even more obvious. As budget cuts and austerity measures have swept the nation, schools are increasingly relying on money from vending machine contracts and corporate partnerships. These revenue streams rely on how much food the students buy, meaning that the school earns more money if it stocks these machines with junk food.

Due to increasing criticism from the public health community and the federal government, the fast food industry undertook the ambitious task of self-regulation in 2006, launching the Children’s Food and Beverage Advertising Initiative. Under this initiative, companies pledged to market “better-for-you” foods to children.

Here are selections from the menu they came up with:

Assuming the meal is a plain hamburger, the offering has nearly 400 calories.

Assuming the meal is a plain hamburger, the offering has more than 550 calories

Sometimes the industry’s definition of regulation, is the best argument for government intervention.