Keep your comments off my baby

As a blogger, I could take the Internet's wrath. But when I decided to have a kid, I wondered: Was it time to quit? 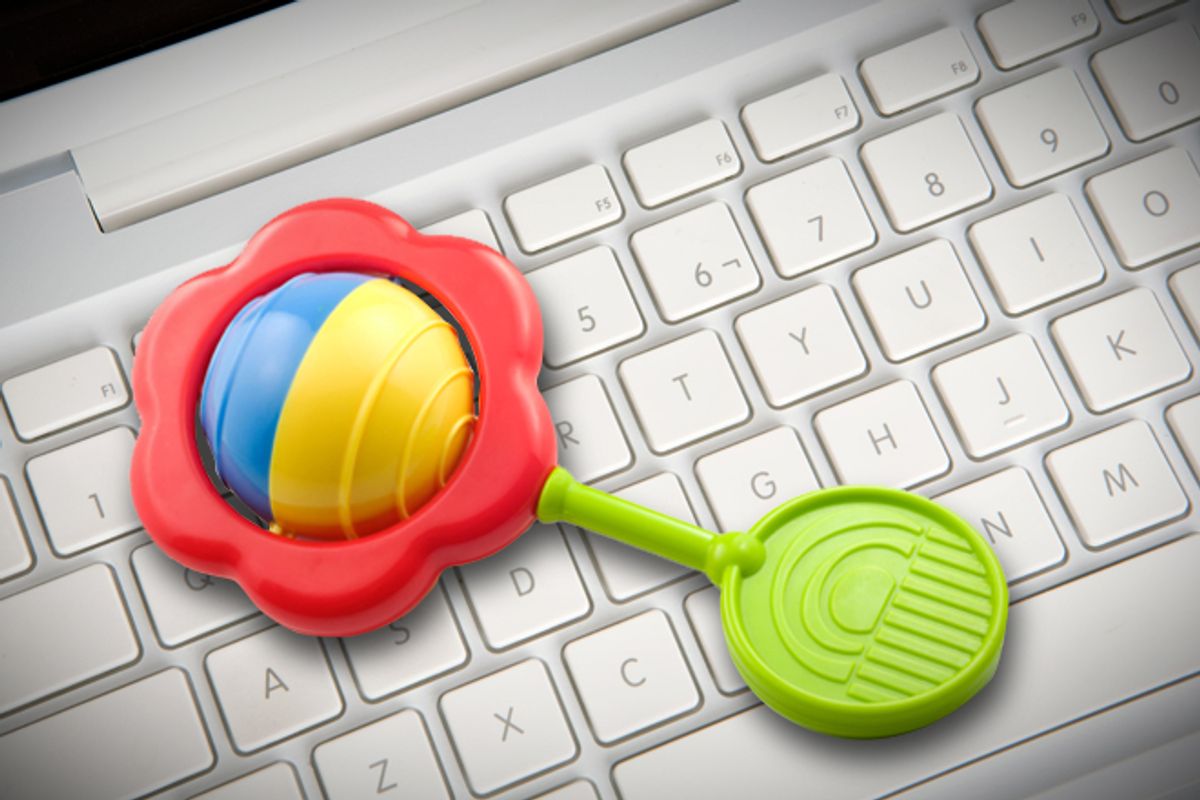 I am not pregnant yet, but I am already thinking about what the commenters will say.

When I became an Internet writer three years ago, I didn’t know much about the blogosphere, or the ferocious battles waged between different online representatives of feminism, or the popularity of mommy blogs, or the difference between Gawker and HuffPo. I just wanted someone to read my writing, and I wanted someone else to give me money for it. My first paid gig was at AOL; I did author interviews and wrote personal essays for the women’s site. I didn’t know to be embarrassed that only old people still use AOL. I gave them some dramatic stories, like the account of my cosmetic surgery. My husband’s great uncle called to let him know that when he’d opened his browser before breakfast, he learned all about how much I used to hate the way I looked.

I was embarrassed but determined. So what if people I saw once every few years at an awkward Christmas celebration knew my bra size and the details of my struggle with food-related guilt? I was a writer! I was making it big on AOL!

And then I read the comments, and I cried for most of the night. You know the drill: The commenters said every mean thing imaginable -- and some virtuosic, experimental mean things, too. “You are so pathetic and stupid,” they told me. “You don’t deserve to be allowed to write.”

The words “navel gazer” were spat at me after every personal essay, and for a long time they stung. But eventually I began to grow a thicker skin. For every hate comment, I got ten thank-you notes. People wrote to me just to apologize for the other commenters, like the guy who referred to me as a “kike bitch who should be shoved in the ovens.” The other day, I opened my email to find the comment “UGLYUGLYUGLYUGLYUGLYUGLY YOU ARE SO UGLY.” I giggled. “Imaginative,” I said as I deleted it.

“Narcissist!” screeched a comment under my bio on my blog. I sighed.

I mean, it was probably true. I was self-involved. But I began to wonder if that was necessarily such a terrible thing. I read powerful personal essays by other writers who were thinking carefully about themselves, and through their own honesty and openness, I learned more about the way humans work. Personal essay writing struck me as brave, especially in an arena of rabid, snapping commenters hungry for young flesh. Chin up, I sat down at my laptop to write about weight gain, anxiety, having small breasts and growing up with a chronically ill parent. I thought that maybe I could do this forever.

And then I decided to have a baby. And I started to feel differently about everything.

Before I even had good evidence that my ovaries knew what they were doing, my brain had leaped ahead. I scrolled through enormous databases of baby names and read stories that began “when I went into labor with Jayden …” and I was trying to figure out what kind of birth I might want, what kind of prenatal care I needed and what I thought about every type of vaccination. My husband and I began to have conversations about education that would start in the evening, resume in the morning, extend to Google chat and finally trail off during dinner three days later. We started talking about what kind of parents we wanted to be. What kind of parents do children respect the most? we asked each other. Not bloggers, I thought.

As I waded into every topic of importance for a future parent -- pregnancy, birth, infant care, early childhood education and schooling all the way up to college – I watched controversies that at one time felt remote and distant creep onto my front porch. The once vaguely amusing “mommy wars” now felt as though they were raging just outside my window, with an occasional brick crashing through the glass. I’d told thousands of strangers about my own body issues, but I wasn’t sure that I wanted to let them comment on my decisions for my child. I felt protective and defensive just thinking about what people might say. It was one thing to rip me apart. But they’d better keep their grubby comments off my kid.

I also began to question if writing wasn’t, on some fundamental level, too self-centered an endeavor for motherhood. Part of the reason I wanted a baby in the first place was to be forced out of the shell of my self-concern. Life on the other side of a baby would be reorganized around new essentials, and I wanted to experience an evolution of priorities. The day I knew I wanted to have a baby, I also knew that I didn’t want to feel “stuck” in my 20s, where preoccupation with making a name for yourself sometimes feels inescapable.

Blogging is such a good medium for young, ambitious people who are hungry for the world’s attention. People may criticize the sordid details of your life, but there is bottomless interest in them. You can make a (not very lucrative) career out of telling stories that help you figure yourself out a bit more with every paragraph. Every day, there is a small chance that you will go viral. It is anything but stable and boring.

But there is a point when stability and boredom are no longer qualities to be fought against. When I pictured myself as a mother, I saw the baby I was holding, not the size of my hips, and I thought that was the point. I know women have written a million words about baby weight anxiety, but my fantasy was that becoming a mom would remove that self-inspection. I wouldn’t have time to analyze my thighs, let alone write pieces about them.

And yet, I could not fight the urge to share these thoughts about having a baby. How ridiculous: As I savored the idea of my new, less self-involved phase of life, all I wanted was to write about it. Because writing is the way I made sense of life and its challenges. So of course I was itching to put my decision into words and hit “publish.” I made myself think about it for two weeks, and then, in a burst of relief, I finally did.

And you know what? I received an outpouring of excited, supportive comments. We hear a lot about scathing online criticism, but less about the amazing dialogue that can occur. I love the discussions that take place in the comment section of my blog. I’ve gotten amazing advice from readers. I’ve gotten validation when I was near despondency. Comments have cheered me up, made me feel brave and pointed me to a hilarious comedian I never would have discovered on my own. I’ve made friends through the Internet that are now some of my closest ones. I’ve gotten the sense that I am participating in a conversation that is bigger than a living room or a coffee shop or a neighborhood -- it reaches around the world. I love that sense of connectedness.

“So you decided to tell everyone, I see,” said my mom, laughing, but slightly disapproving. She’d advised me to keep it among a few close friends.

“It’s just that I wish people talked about this more,” I said.

And that is the thing. That is why I am probably not going to stop writing about my life. Maybe I’ll tone it down at some point. Maybe sometimes I’ll turn the comments off on my blog on a particularly sensitive post where I just don’t want the input. Maybe I won’t read the comments when I publish a piece on another site because I don’t care about everyone’s opinion and because the people who really want to have a conversation will send me an email anyway.

And I will seek the community of other people going through the same thing. When I saw my readers’ caring, detailed comments in response to the piece I wrote about deciding to get pregnant, I felt like they had my back. I felt like it was possible to talk about life in a way that didn’t involve slinging insults or firing up weapons. OK, it comes with occasional insults, but I’ll have to learn the great skill that mothers throughout history have honed when faced with the unsolicited opinions of strangers.

I’ll have to learn to ignore them.