"The Hobbit" is not a hipster!

Bilbo boasts homely virtues like wit and wisdom. Bestowing him with irony is a betrayal to Tolkien 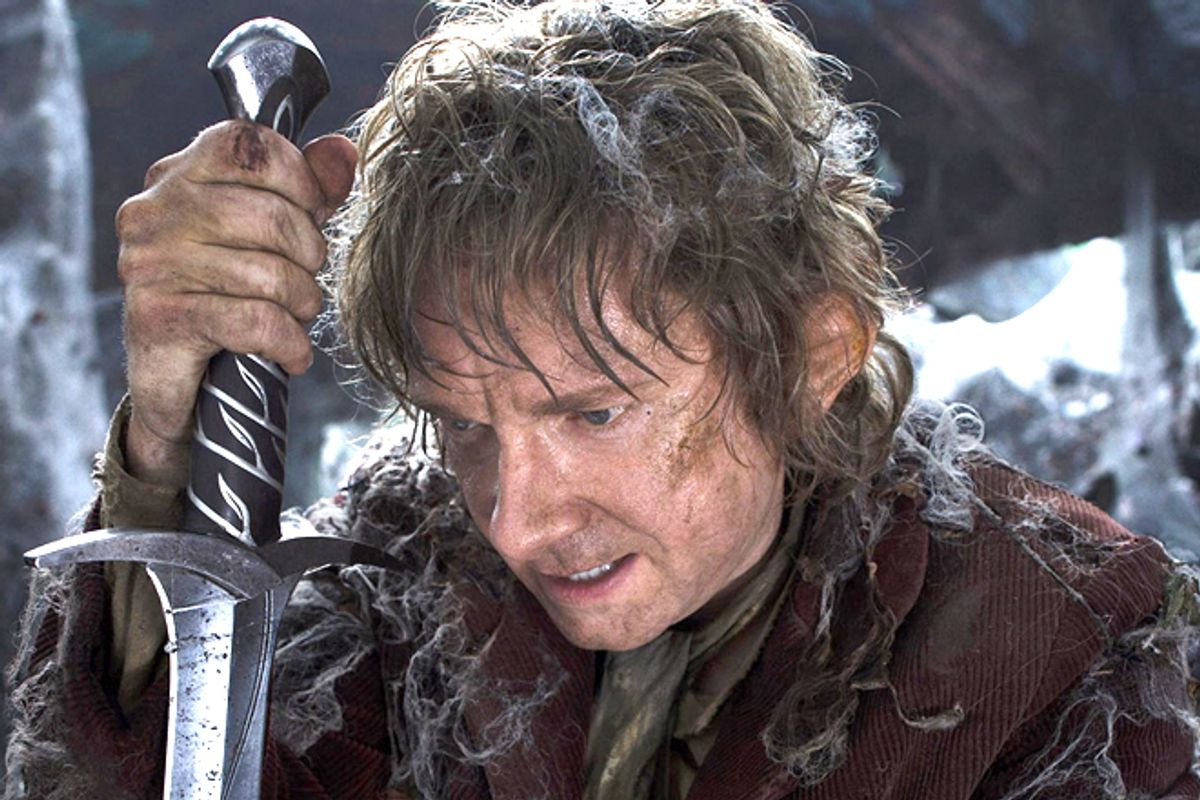 There’s a sequence in the most recent trailer for Peter Jackson’s “The Hobbit” that worries me. It’s at the very end: The dwarves are tentatively emerging from the debris of some colossal battle or other, and one of them says, “Well, that could’ve been worse” — and then a Volkswagen-size goblin carcass crashes down on them.

This is more Chuck Jones than J.R.R. Tolkien, and if there’s more of the same in the coming feature film — whose scope, as we already know, has expanded far beyond that of the original novel — it may not be just Tolkien’s lovely little picaresque adventure that gets swallowed whole, but its plucky, whimsical tone as well, consumed by modern irony.

I should probably clarify what I mean here by irony. In genre films, it takes the form of characters not only reacting to events, but reacting in a way that’s also a comment on their reactions — reflecting a kind of hip awareness of themselves as seen from the outside looking in (incorporating our point of view into their own). George Lucas pioneered this in his first “Star Wars” film — which is one of the reasons we all found it so refreshing back in 1977. Characters in space operas had never talked that way before. But it was Joss Whedon who really took the ball and ran with it in “Buffy the Vampire Slayer” (and everything he’s done since). The post-Lucas-and-Whedon genre movies are immune to the kind of treatment meted out to their predecessors on “Mystery Science Theatre 3000,” because the characters are already saying what the MST3K crew would.

The reason it works is that today’s moviegoers have spent our lives immersed in a media bath so total that the tropes and traditions of every narrative genre are locked into our DNA; and also because we’re the beneficiaries of the great anarchic, anti-establishment turn pop culture took at mid-century, starting with Lenny Bruce and Harvey Kurtzman, on through the original seasons of “Saturday Night Live.” The increasing sophistication of advertising can’t be discounted, either. Our attitudes about everything — politics, sex, culture, you name it — have accordingly become tremendously knowing; we’re intrinsically aware, in a way our grandparents never were, that every time we turn our attention to the media, we’re being manipulated, we’re being sold something. And the media have responded, in a lovely little self-referential dance, by tacitly saying, We know you know this. And you know we know you know this. So the trick is to meet in the middle — for creators to produce something flattering enough to the audience’s sophistication without appearing to fawn, and for audiences to reward the deftest and smartest attempts with devotion and dollars. (Whedon is the god-king of this. His followers are so fanatical, they’d take a bullet for him; and they’d manage an ironic quip before they died.)

But this complex cultural gavotte postdates Tolkien by just enough years to make it an uneasy fit for his major works. What’s required for a Tolkien film adaptation is a direct connection — the kind the Anglo-Saxon bards forged with their listeners in the ninth and 10th centuries, that Tolkien was explicitly trying to channel — something almost completely lost in our post-everything era. Peter Jackson triumphed with his earlier “Lord of the Rings” trilogy because that immediacy — that urgency — miraculously came through, being only occasionally undercut by modern ironic moments (as in Legolas and Gimli’s competition to see who can tally up the most kills in any given battle).

The one inestimable advantage “The Lord of the Rings” has is Elijah Wood. There’s something profoundly un-ironic — even anti-ironic — in the eyes of his Frodo Baggins that deepens in intensity as the trilogy progresses; he makes you understand why more than one literary critic has called Frodo a Christ figure. Woods’ Frodo suffers powerfully and unself-consciously; his performance is both ravishing and terrifying. By the end of the third film, it almost stands comparison to Renée Falconetti’s in “The Passion of Joan of Arc” (don’t jump up and down on my spine. I said almost).

By contrast, Martin Freeman, who takes center stage as Bilbo in “The Hobbit,” has the eyes of a modern, ironic man. Which is part of his tremendous appeal; as Tim Canterbury in the original BBC version of “The Office,” he often stole an entire episode simply by turning to the camera such a look of acknowledged defeat that he might have been the love child of Stan Laurel and Jerry Seinfeld. And as Watson in the BBC’s sensational new “Sherlock” series, his face functions as a kind of supremely eloquent Greek chorus, whether or not he utters a word.

He should be a godsend to any film; you can count on the fingers of one hand the actors working today who can project a complex inner life just by glancing into the camera. (Daniel Day-Lewis comes to mind.) But he may be too complex for Bilbo, who’s supposed to survive by the homely Hobbit virtues of pluck and wit and common sense, not by a fatalistic acceptance of a destiny beyond his control. There’s another scene in the trailer in which Gollum, responding to Bilbo’s proposal of a game of riddles, hisses, “If the Baggins loses, we eats it whole,” and Bilbo thinks for a moment, then says, “Fair enough” — but in that “Fair enough,” we don’t hear Hobbity reasonableness, we hear ironic resignation. We hear modernity.

On the other hand, given the way Jackson has bloated the slender original novel into another epic trilogy, it’s possible that pluck and wit and common sense wouldn’t register above all the din and thrum and thunder. Not the way a single ironic, self-aware glance from Martin Freeman can. I suppose we’ll all find out together.

I just hope we don’t end up leaving the theater saying, “Well, that could’ve been worse,” only to have the second film in the series come slamming down on us like a goblin corpse a year later.