Graphic novelist Robert Kirkman tells Salon that though the strip and show are very different, it's better that way 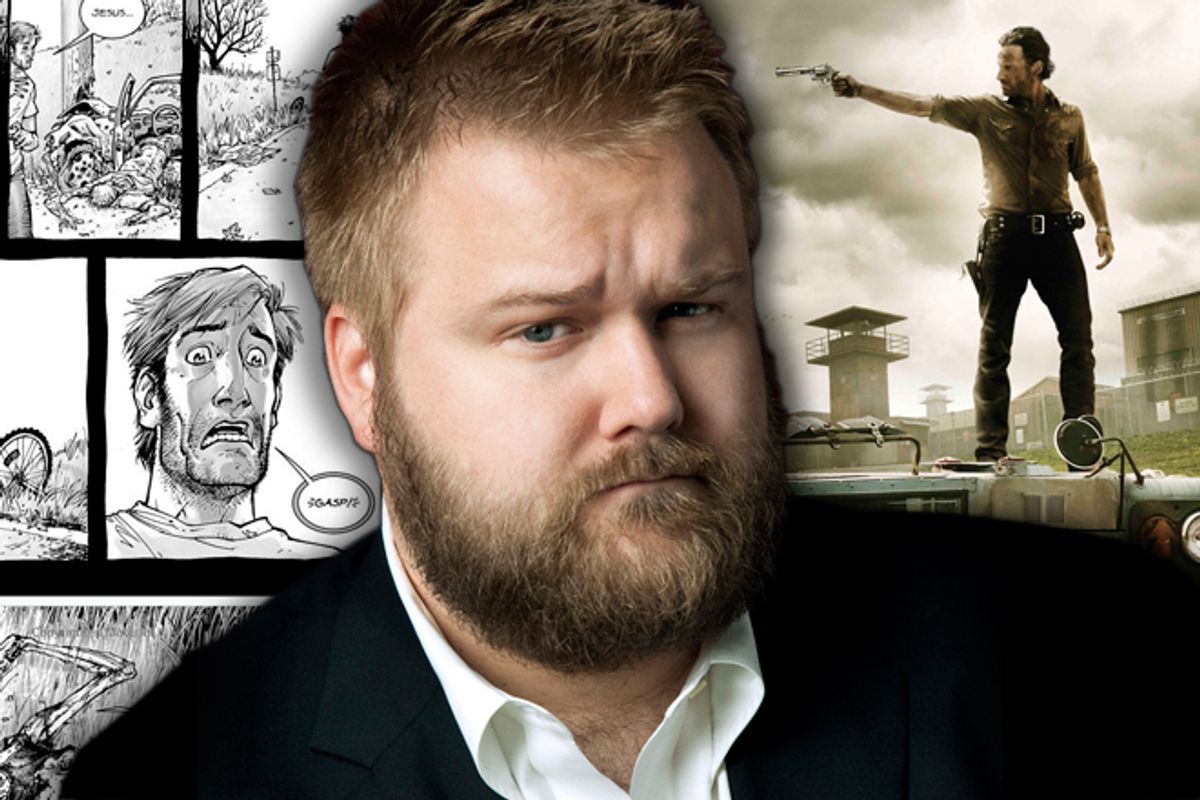 There is a lot of tension between creators and those who adapt their work into TV and film. Stanislaw Lem was twice disappointed that filmmakers tossed important scientific plot points from his work "Solaris." Alan Moore hated the film version of his strip "Watchmen" — though Moore hates everything. Stephen King said he would "do everything different" on "The Shining," even though it was rendered by one of the great filmmakers of all time -- Stanley Kubrick -- into, arguably, a master work.

Robert Kirkman, the co-creator of "Walking Dead," makes no such claims of AMC's adaptation of the comic book that made the flesh-eating undead fashionable again. In fact, he embraces the vast differences between "Walking Dead" the television show and "Walk Dead" the comic book.

"Oftentimes, I'm the one driving it," Kirkman told me.

The differences between the TV show and the comic were apparent as soon as the show debuted on Oct. 30, 2010.

Some were minor: Rick Grimes was a deputy sheriff in the comic but appears as a police officer on the show. Others were distinct: The AMC edition introduced the crude country racist Merle and his crossbow-toting brother Daryl. And they dropped a key character: former pro football player Tyrese.

But what endured is the basic premise: A small band survives the immediate turmoil of a zombie apocalypse and is left behind in a dangerous, lawless dystopia. But the AMC show went wildly off the comic's path as the show progressed. The differences are too many to list, but some glaring examples stand out. (Warning: Here come the spoilers.) The first season ended with a run-in with a scientist at the Centers for Disease Control and Prevention, and much of the second season revolved around the search for a missing child, neither of which happen in the comic.

In the third season, whose midseason finale will run Sunday, Rick's wife, Lori, who is possibly pregnant by another man, has a makeshift Caesarean amid a zombie attack in a prison (note to non-viewers: This makes perfect sense if you're following the show) and is euthanized Old Yeller–style by the Grimes' preteen son.

This is another creative liberty taken by the TV's writers: Lori does die in the comic, but not until much later in the story, after giving birth as the prison is under siege by living outsiders. She, together with the baby, is fatally shot in the back.

It's interesting to compare "Walking Dead" with HBO's "The Game of Thrones," which has stayed true -- often word-for-word -- to George R.R. Martin's series of fantasy novels.

"I think that would be a little boring," Kirkman said. "I wouldn't want to do that." Kirkman says he takes no offense to the implication that something he's written for the comic — a winner of a 2010 Eisner Award, the highest honor in comic-dom — needs revision. But he doesn't mind the implicit criticism — and revels in the opportunity to revisit, re-craft and re-create five-year-old writing.

Key to Kirkman's open-mindedness is his deep involvement in the television show. He is an executive producer and writer for AMC's "The Walking Dead," and he is generally viewed as the number-two to showrunner Glen Mazzara, who took over the show after creator Frank Darabont abruptly left.

"I'm there everyday with the writers," explained Kirkman, who began the comic as a virtually unknown writer living in Lexington, Ky. He learned the industry while working at a comics store and without the benefit of higher education, just the study of gobs of comics.

"I'm intimately involved in the direction the show is going. That's what makes me so excited about the show."

Isn't it impossible to not be protective of a story line he's been intimately involved with for nearly a decade -- a storyline that made him successful?

"That never really enters into it," he said. Much of his comfort with blowing up an already successful story is an understanding that what works in print doesn't always translate well on a screen, he explains. He also wants to keep the comic's fans engaged.

"If Lori had died on the TV show exactly the same way, there would be a significant portion of the audience that would be expecting it -- and it would have no impact," Kirkman said.

"The episode now stands as the biggest telecast for any drama series in basic-cable history among total viewers," Hollywood Reporter said at the time.

That's a lot of concession for .006 percent of a fan base, assuming that comic readers are aware of Kirkman's late aughts comics — about where the TV story is now, vaguely — and that they're watching the TV show, too.

Those people were Kirkman's original constituency, and he said he doesn't want to forsake them.

About that missing-child plot from Season 2: The search for Sophia — another preteen in the missing group — encompassed the entire season, leading recappers to plead for the series of unexciting searches to end. It did in the finale, when the girl, a gray-skinned ghoul, ambled out of a barn used as a holding pen for zombies by a veterinarian who believed he could cure the undead.

None of this happened in the comic. There was an unleashing of the barn-trapped zombies, but the climax wasn't so climactic. For Kirkman, this is the best example of how the show's writers have improved on his original story, an instance of the AMC team playing the role of the Clash to the comic's Bobby Fuller Four.

"Some of that is in the comic book -- a couple of Hershel's kids die, but whatever," he said. The TV version "really just added an extra layer for the fans of the comic book. That barn scene really stands out for me."

Kirkman may not be protective of the comic, but he can be defensive: When she debuted in the comics, the character Michonne — a stoic, katana-wielding warrior — was panned as unrealistic by fans of the comic. And the series of events that followed, which the show is just starting to reach, were where message-board critics (who are legion) began to say the narrative went off the rails, as much as it is possible to say that for a story about zombies.

"I don't agree with that," Kirkman said. "I think there are people in the world who have those capabilities."

The TV show's story will surely go further into wild, unexpected or, dare say, seemingly ridiculous realms if it goes on for seven or eight seasons, Kirkman said. It's the nature of a tale where society has completely broken down, he said. The further people are removed from any sort of recognizable social contract, the less recognizable society will become, he argued.

Kirkman defends his story, in whatever version.

There have been times, he said, where he wasn't thrilled with ideas tossed out in the writers' room. In those cases, he'll "steer things" into a more acceptable direction.

Otherwise, he concedes, the 104-to-date monthly comics he's written lack an advantage his and his scriptwriting cohorts have for AMC's version.

"There are certain times where I feel the TV show sort of elevates things," he said, with the "benefit of hindsight."

Joseph Lord is the online managing editor for WFPL News in Louisville, Ky.