Are fans responsible for Jovan Belcher?

Jovan Belcher's murder-suicide was hideous -- and tragic. It's time we stop enabling the NFL's culture of violence 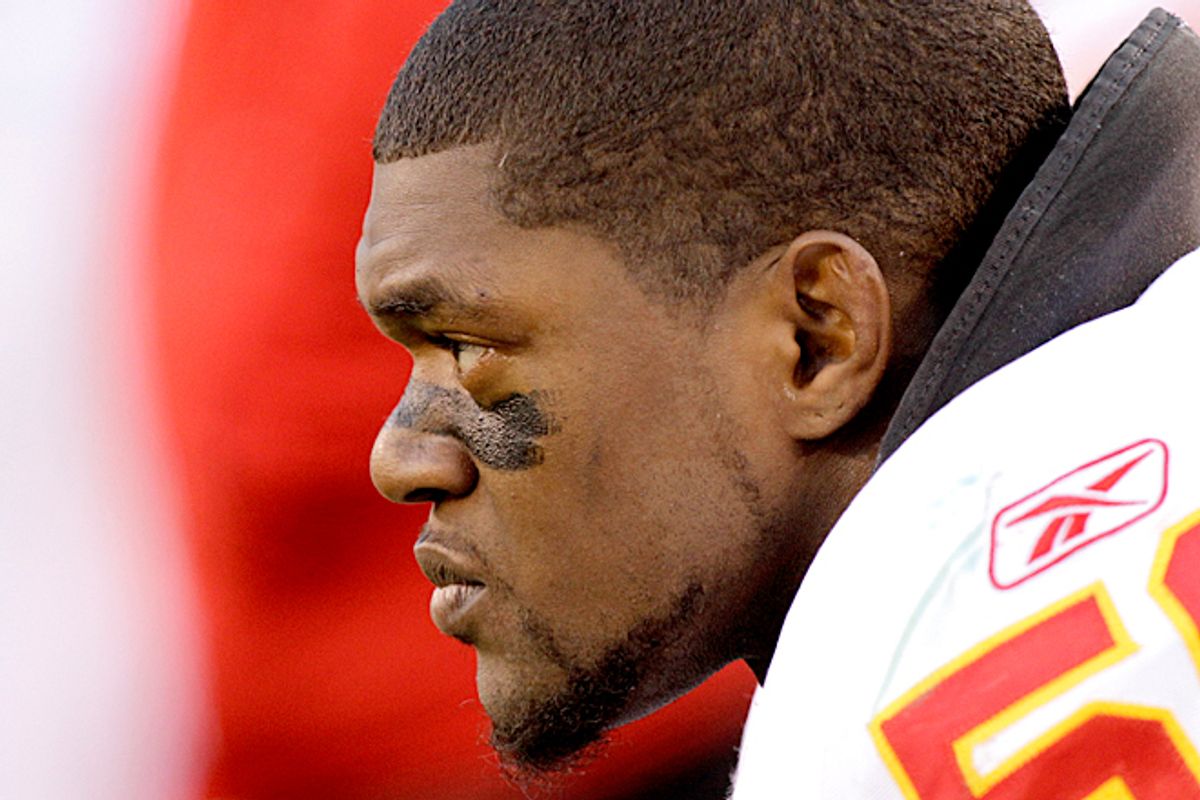 A few weeks ago I wrote about how football wasn’t good for me and I was trying to quit. Since my rant I’ve managed to avoid a lot of football; I’ve missed my favorite player, Lesean McCoy, getting severely concussed in garbage time of a meaningless game, I have no idea how Peyton Manning is doing in Denver, and I only have a vague understanding of what’s happening under center in San Francisco. Last week I backslid a bit when I watched three quarters of the Eagles’ Monday night game against the Carolina Panthers; I justified this lapse by telling myself that it was OK because at this point Eagles’ games bear almost no resemblance to actual professional football.

Sadly, this weekend there was a terrible and all too serious reminder of why I’m cutting football out of my life for the time being.

I’m not going to focus on what happened in Kansas City beyond saying that if you cannot see this weekend’s awful events fitting into a larger pattern of football-associated tragedies (Chris Henry and Junior Seau came to mind very quickly) then you are being willfully blind.

It’s easy to lay the blame for the awful response to the mental and emotional health crisis affecting the NFL at the feet of the owners and commissioner Roger Goodell; it’s a much harder thing to accept our own responsibility as fans and to make the necessary changes.

Waiting for Roger Goodell and the owners to admit there is a problem and get serious about player safety and mental health is like waiting for Godot — except with the NFL, you get bullshit commercials starring Tom Brady and Ray Lewis announcing that Godot’s arrived so you can stop worrying. There is nothing surprising about this: The owners' and commissioner’s job is to grow their industry and make as much money as they can RIGHT NOW! And they are doing an amazing job, thanks to Fantasy Football and new technologies and outlets that can deliver games en masse like Sunday Ticket, NFL Redzone and the NFL Channel, this generation of owners and the marketing geniuses they employ have turned football into a sport where fans want to, need to and can watch every game, not just the one in which their favorite team is playing. Every game counts, and from Thursday through Monday night we can’t get enough. Despite the tragic stories that have appeared every few months for the last several years, where is the pressure on the owners to change this billion-dollar formula?

So if you take the owners and the commissioner out of the equation (which you should), a large part of the responsibility for the health and safety of the players, their loved ones and ultimately the game itself rests on the shoulders of you and me: the fans consuming all that glorious product. It is our responsibility to say enough is enough and not simply shrug our collective shoulders and deliver platitudes about the nature of the game or try to argue that these individual acts of violence and self-harm don’t create a pattern that you can connect with the sport that they all have in common. The body count is getting too high for that to be a viable argument anymore.

We need to admit there is a problem and we need to start cutting down our consumption of the game in order to save it. When every game stops counting, when the owners see that their product is flagging under the weight of their well-moneyed indifference to their employees' health and safety, then and only then will we see them begin to make changes.

At the same time, we as fans also need to start putting suggestions on the table for how to make a dangerous game safer so that the men who entertain us every week aren’t stalked by the dual specters of brain injury and pharmaceutical addiction. If we really love football, we can’t say it can’t be fixed. We have to apply pressure and offer opinions on how to make it work, no matter how ridiculous they may seem.

For instance, instead of the owners talking about an 18-game season maybe we should be seriously talking about a 12-game season with longer lag time between games. Maybe we insist on making Steve Wallace’s weirdo '90s-era styrofoam double helmet mandatory. Maybe those are a dumb ideas, but we’ve reached a point where dumb ideas are better than sitting around with our heads up our asses pretending that the tragedies will just stop before the sport does.

The only other thing I’ll say about what happened in Kansas City this weekend is that no one should be surprised that the Chiefs played the game, that Romeo Crennel was stalking the sideline instead of pacing the office of a grief counselor. For the owners, the game will always go on like nothing happened. In fact, the game helps us move on quickly, and turn one day’s horror show into some sort of crappy story about determination in the face of adversity the very next day. It’s up to us to admit that we know what happened, that we were paying attention, that we’re not ready to move on yet, and that even though we love the game, we don’t have to watch just because it’s on.