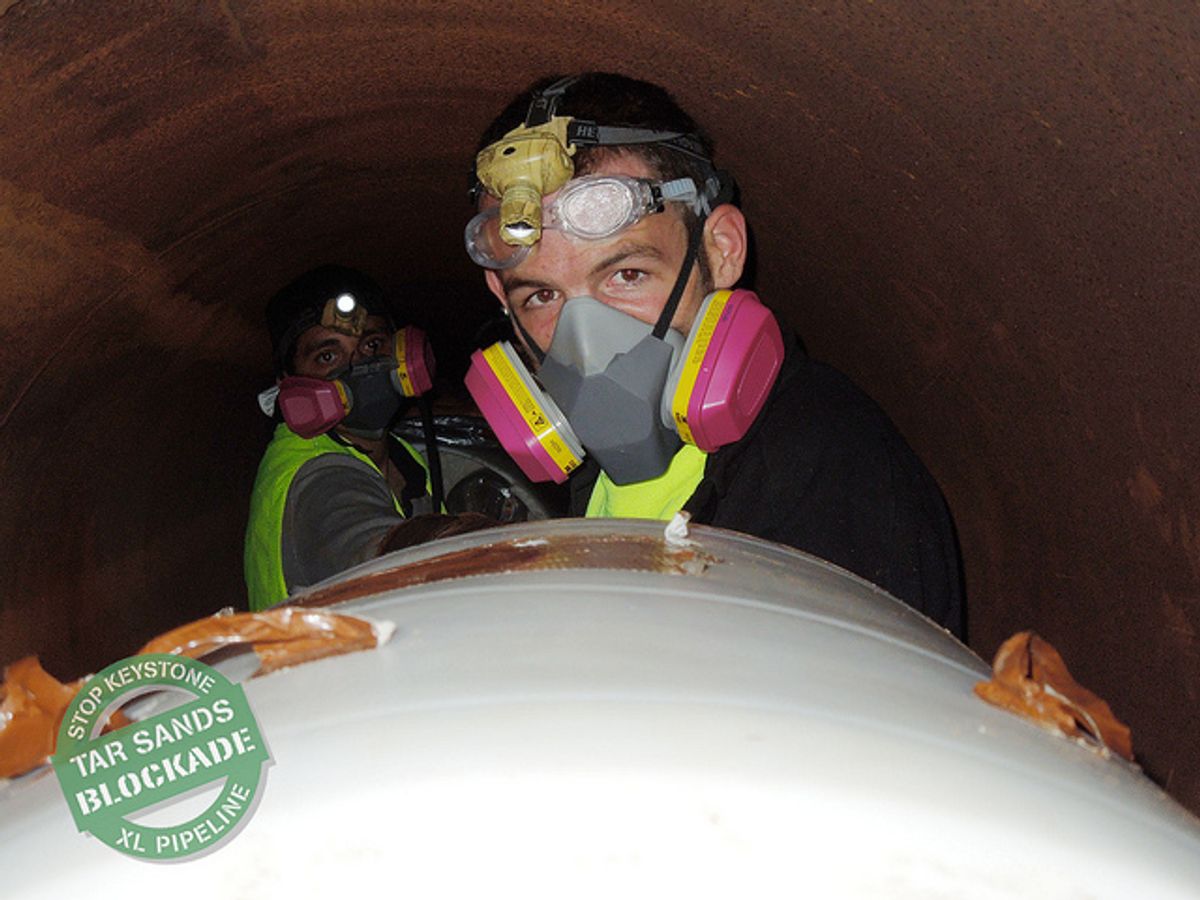 Glen Collins wore a gas mask inside the pipeline (via tarsandsblockade.org)
--

On Monday two activists protesting the expansion of the Keystone XL pipeline blockaded themselves inside the pipeline itself in an unprecedented protest move. The Tar Sands Blockade group has staged a number of high-profile blockades in East Texas, where the southern leg of the pipeline is being constructed, but this was the very first blockade to enter the pipeline and involved extreme risk to the participants. As a Tar Sands Blockade release explained:

Using a blockading technique never implemented before, Matt Almonte and Glen Collins locked themselves between two barrels of concrete weighing over six hundred pounds each. Located twenty-five feet into a pipe segment waiting to be laid in the ground, the outer barrel is barricading the pipe’s opening and neither barrel can be moved without risking serious injury to the blockaders.

As Salon reported last month, President Obama had delayed deciding on the stalled pipeline extension until after the election, but must now consider whether to approve the TransCanada-owned pipe, which would carry crude oil from Alberta’s tar sands to the Gulf Coast, while — according to opponents — producing lethal levels of carbon emissions, uprooting communities and lining the pockets of oil magnates the Koch brothers. Obama is highly likely to eventually approve the pipeline but not until early 2013 at the earliest.

In the meantime, the Tar Sands Blockade group continue to build support and protest the Keystone XL's southern leg with escalating intensity. Police struggled to extract the blockaders for sometime Monday, according to updates from the group:

Glen and Matt are still locked inside the pipe; the police have been completely unable to extract them but continue to threaten various extraction techniques which would endanger the blockaders’ lives, such as cutting into the pipe.

Join the fight against Keystone XL by coming to our next Mass Action Camp starting on January 3, one month from today!

Police brought an ambulance to the scene and then began pulling on one of the barrels. The crowd surged onto the easement to protect Glen and Matt from this dangerous extraction, but they were chased away by the police. Both barrels and the two blockaders have been removed from the pipe.