Men who made my legs

Before I found intimacy with a boyfriend, I learned to be seen by the guys who built my artificial limb 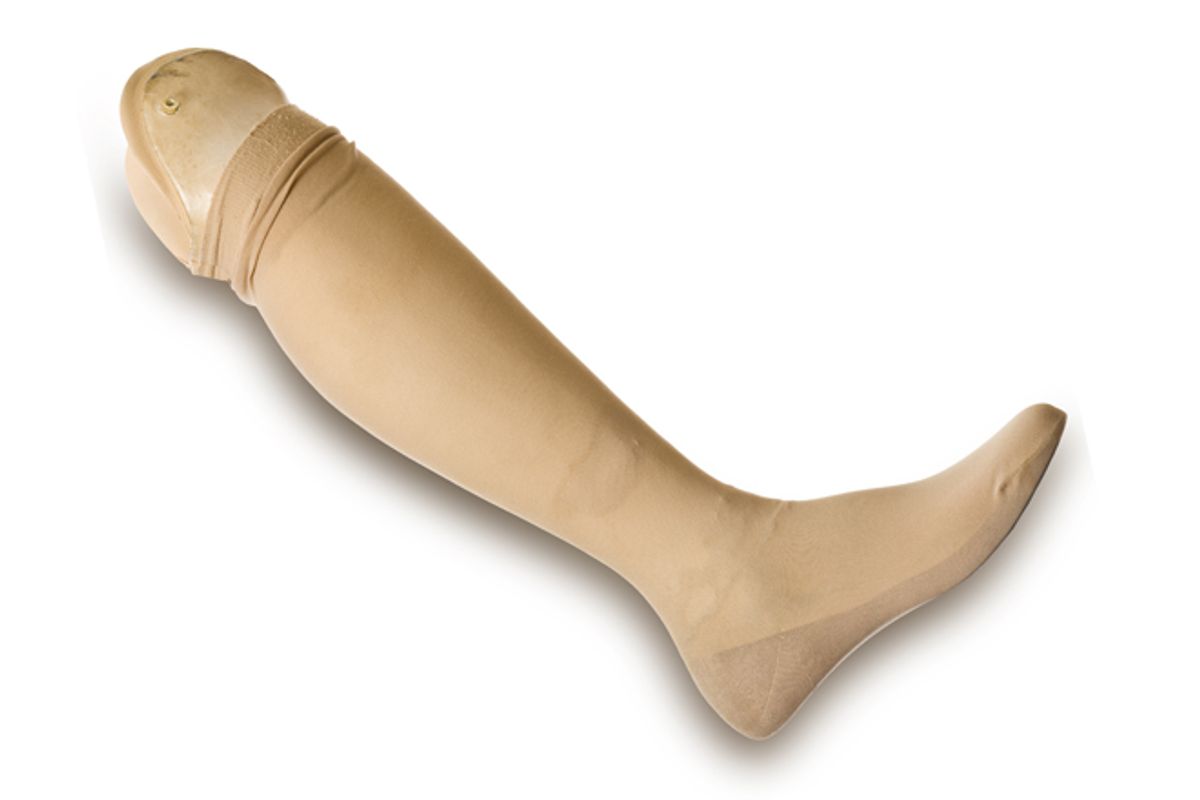 "Body Issues" is a personal essay series about obsessions with our own appearance. To read the first installment, click here.

At the age of four, my left foot was amputated as the result of a congenital birth defect, and I had a series of legs made by a series of men. The first prosthetist was a chain-smoking, endlessly cursing World War II veteran who asked me to hold his ashtray while he made adjustments. The second, whose office was behind a used car lot, scared me whenever he asked me to take my pants off so he could “have a look” at where the waist strap of those early uncomfortable wooden monstrosities was cutting into my hipbones. I didn’t like his voice or the way he looked at me -- lecherous and aching.

All through my 20s and 30s, I navigated relationships with men -- sexual, marital and otherwise, looking for (and not finding) the right match. But it is difficult -- perhaps impossible -- to talk about that search without addressing my relationships with my legs and the men who created them. For some reason, I have yet to meet a female prosthetist.

As the years rolled on and our country kept going to war, veterans returned with new body issues to solve, and my legs were no longer made of wood but of titanium; some even had computerized parts that had to be plugged into the wall at night. I was a true cyborg, a half-robot, as I gradually gained access to the kind of advanced technology that was totally out of financial reach for me even 10 years ago. I now have about seven legs -- all paid for, in part, by insurance -- with a range of sockets, abilities, knees, hydraulic systems and general prosthetic superpowers.

I only wear one.

I call this favorite leg my “Harvard leg,” which is so named because while I was a student at Harvard, I had a stellar insurance plan that paid in full for every piece of “durable medical equipment” I accumulated. This leg, made in 1998 by my best prosthetist, Bill, is still my favorite. I like its shape, its fit, the way the heel strikes the floor. The leg has survived two blown-out knees, four foot replacements and a few “repaints.” It has carried a baby, been too big or too small, depending on varying periods of diet and exercise, biked thousands of miles (in a spin room) and done a lot of downward-facing dog poses in yoga. It’s not the most technologically advanced, so I find myself weirdly aligned, at 38, with the Vietnam veterans I knew as a child -- guys who didn’t want new legs, and who were happy with the old wooden contraptions because “they work just fine.”

My relationship with Bill has outlasted every major romantic relationship I have had to date, spanning decades and transcending politics and lifestyle and just about everything else. Bill’s smart. I’m smart. He’s about 15 years older than me, and we both like to talk. I know all about Bill’s wife and his three sons, but I’ve never met them. I know Bill’s hometown, his educational history and all about his time in the service and his work with the Paralympics, but I’ve never seen him or interacted with him outside the walls of his offices in Denver and Colorado Springs.

In the 1990s, when I first met him, he drove a Ford Explorer. Now he drives a Lexus. He’s seen me through two marriages, many advanced academic degrees, a healthy pregnancy, a bout of intense international travel and, most recently, a terminal diagnosis for my son Ronan. He works with a technician called Ray who follows Bill’s orders and makes leg parts as if it were a Christmas present assembled in a cheery, music-filled factory; as a child I even imagined that elves put the leg together. Although I’ve met Ray only once in my life, he sends me packages of new parts in the mail every few months, and I’ve seen (but not touched) the special mold of my residual limb hanging from his work wall in the back room. My relationship with Bill is co-dependent and intimate on an epic scale, and yet I see him maybe once or twice a year.

After Ronan was diagnosed with Tay-Sachs, a rare and always fatal genetic neurological disorder with no treatment and no cure, I was too upset to tell Bill, because I knew how deeply it would upset him. He’s been a champion of mine for almost half my life. I worried he would feel the way I did: that my body had betrayed me, this body that he had helped move so successfully through the world. I asked my mom to tell him, and she did. For the next year, Bill made adjustments to the leg without either one of us saying a word, and I was grateful for his silence. In those moments, I was reminded of all the years when he was the only man I could stand in front of in my underwear and not feel shame.

I’ve been around the block with some other leg men: in San Francisco, the office on Divasadero had prosthetic feet hanging from the ceiling, and during adjustments I wore red and white checkered plastic pants that looked like they’d been cut from a picnic tablecloth. In Los Angeles, the land of plastic surgery, the man in Beverly Hills was completely incompetent, and the parade of poodles that followed him wherever he went did not inspire confidence. He gave my ill-fitting leg parts to me in a shiny silver bag; the building had valet parking only. The second dude in Los Angeles was nice, and a bit better, but the leg’s alignment was never right, some piece of it was always too heavy, the knee never functioned properly, and strange men who didn’t speak to me would often burst into the room, motion me to stand, and make random lipstick marks around my hips in red. Prosthetists often make markings for fittings in red lipstick because it’s highly visible and washes off easily. Their color of choice? Revlon’s Cherries in the Snow.

It was Bill I needed, and so when I moved to New Mexico, I decided that a five-hour drive was worth it. I would never break up with him again. Ever. I trust him to make the part of me I need -- and often resent -- the most. This part is also the component that has made adult sexual relationships angst-ridden and occasionally problematic.

If finding a leg maker was a difficult process, dating as an adult woman with a disability was even trickier terrain. As a child, the wooden leg was a fun toy: I covered it in ketchup and launched it through the window like a javelin at innocent trick-or-treaters. I was the “body in the coffin” at the haunted houses I created with my cousins, making a grimace whenever someone opened the lid of the box and holding my leg out and moaning melodramatically as if it had just been severed. For many years the leg was a conversation starter, but then I hit puberty and realized the leg was no longer an asset. In fact it was a major liability. All I wanted was to cast it off forever, and not just at the side of the bed at night.

My body attracts stares at public pools (which is why I avoid them) and on the ski slopes (I like skiing too much to avoid that), and it doesn’t look “right” if we take the standard all-four-limbs body as the normative standard of what one should look like, especially during sexual encounters. Several tactics I’ve used in the past in order to overcome this anxiety: get really drunk so you can’t think about it; pretend like it doesn’t exist while also pretending to enjoy yourself; deflect attention by making jokes or being super funny. All of these are inadequate, obviously, and create deeper barriers for closeness than any bodily difference.

But something happened recently that changed my relationship between my leg and me -- I hope it's for forever, although losing a limb, befriending veterans, being married twice and being a mother to a terminally ill son has taught me that nothing is forever.

About four months ago I began dating a man with whom I fell in love. Intimacy with a prosthetic limb is not an easy psychological maneuver. I could say I don’t care. I could say I’m not self-conscious. I could say I’m super-hot from the waist up and that the rest from the waist down is “complicated.” I could pretend like my artificial limb was a cool fashion accessory and prance around. But all of that is just semantics, and it’s all a handful of lies when faced with the body of another person you love and want to please. I’ve been alive long enough to understand what’s truly at risk in the bedroom. But I also have a fearless understanding that no future exists with a person who considers my body an “issue” or a “flaw” in the way that I, sadly, sometimes still do. Part of me will always want to be that airbrushed, perfectly whole woman in the magazine who wears short skirts and high heels and just looks fabulous. Shallow? Sure. But it’s the truth.

So imagine my great relief when my boyfriend recently told me how much he loved and adored all of me and that he actually preferred my body without the leg. It wasn’t only an indicator of deep trust. He said, “It’s like I have all of you then.”

Until that moment, I did not know that I needed such a statement articulated in just that way. The fact of the leg wasn’t being treated as a joke. It wasn’t being ignored. It wasn’t an object of pity or shame. Nobody was looking away. I realized it was the kind of statement I’ve been waiting all of my life to hear.

This does not mean that other men have not accepted or loved me the way I am. Not at all. But my self-consciousness has always been a factor. And those words, said in just that way, was the thing I would have liked to say to myself.

Since then, and for the first time, I find myself proud of my shape without the prosthetic. Truly proud. Removing it is still a moment that registers, but I can lay it on the floor and leave it there with less angst. I can put it on in the morning and not feel self-conscious or flawed. It is hard to put this great relief into words, like the evil squirrel that was living in my chest has been evicted and skinned alive.

And it is not unlike the way I feel when I walk into Bill’s office, which is clean and bright and full of interesting veterans (men and women), older people and young kids. No yellowed curtains, no creepy prurient stares, no outdated magazines gathering dust on filthy tables. No shame. Just bodies and their requisite parts. Just people.