Who will win the Adelson primary?

Several GOP 2016 hopefuls have met with the wealthy casino mogul, but keep an eye on Virginia Gov. Bob McDonnell 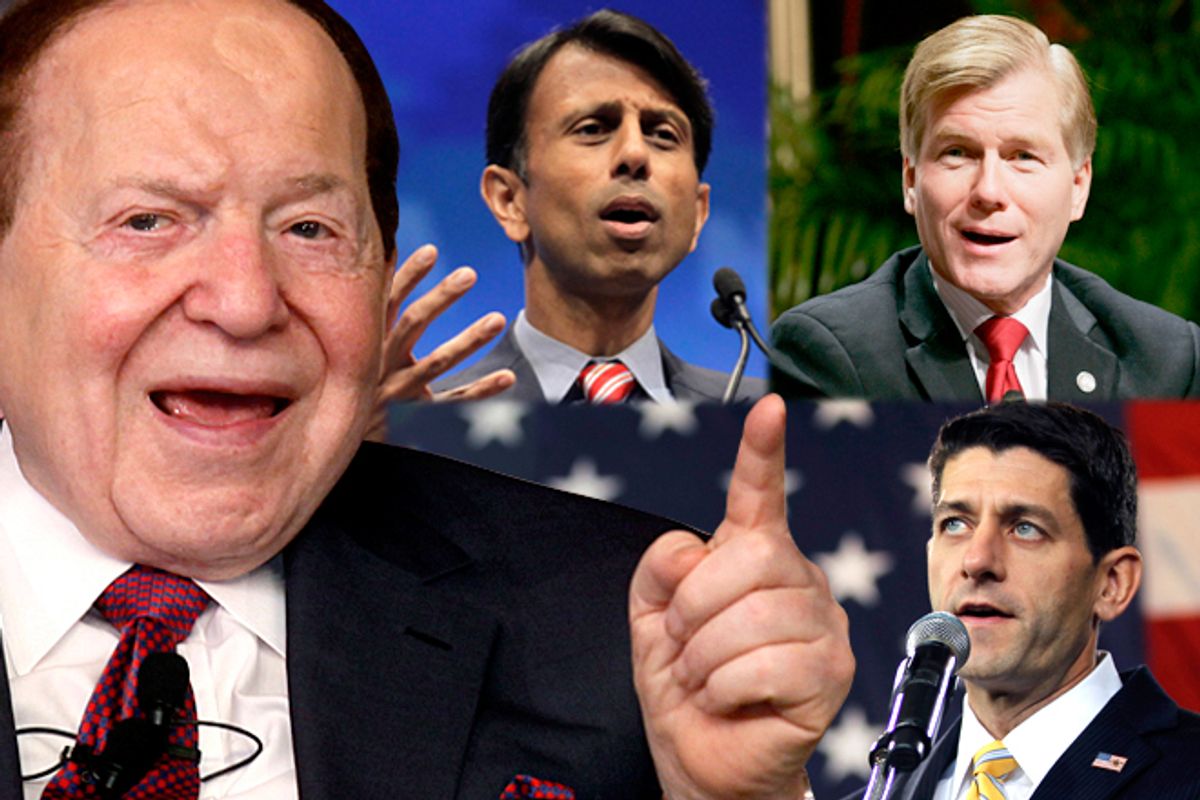 Mitt Romney may still be grieving his loss (mostly by eating pizza, it seems), but 2012 is sooo last month and 2016 is just around the corner. Politico’s Ken Vogel reports today that potential candidates of both parties have already started courting potential donors, including Las Vegas casino mogul Sheldon Adelson. Adelson is the top prize for any GOP White House hopeful, with pockets deep enough and political instincts dull enough to single-handedly fund a presidential campaign. He spent, we learn today, an absolutely astonishing $150 million backing Republicans this year, including $20 million on Newt Gingrich's failed bid. So the stakes are high for the suitors, but to whom will Adelson give his rose?

Rep. Paul Ryan met with Adelson shortly after Romney picked him for the V.P. slot, but the mogul reportedly wants someone with “executive experience,” so that means governors. There were plenty of those around last month when the Republican Governors Association met in Adelson’s home in Las Vegas, and Vogel reports at least five trekked across town to woo Adelson. The suitors were Louisiana Gov. Bobby Jindal, Ohio Gov. John Kasich and Virginia’s Bob McDonnell. Rick Scott of Florida and Jan Brewer of Arizona also met with Adelson, though neither are considered 2016 contenders.

While any speculation about who will win the Adelson primary at this point is purely tea leaf reading, we’re giving McDonnell the edge. Adelson donated $20,000 to McDonnell’s 2009 gubernatorial bid and the mogul has been actively involved in Virginia politics since. He was the largest donor this year to a super PAC created to boost Republican George Allen’s Senate bid. That group, Independence Virginia PAC, was founded by a former aide to McDonnell, and Adelson’s $1.5 million donation accounted for over a third what the group ended up spending. Adelson has also given thousands to Virginia Rep. Eric Cantor and his Commonwealth Leadership Fund.

We know there are a few issues Adelson is particularly interested in, including casinos, energy and Israel.

McDonnell may have a slight edge here too, as Kasich and Jindal have both played hardball with the casino industries in their states. Kasich got in a public confrontation with Ohio gaming executives when he wanted to raise taxes on casinos, saying "the taxpayers of Ohio got a bad deal” on gambling. Developers even halted construction on casinos in Cleveland and Cincinnati at one point last year to protest Kasich's moves.

Jindal twice vetoed a financing deal that would have benefited the Harrah’s in New Orleans. He’s had to take a tough stance on gaming thanks to the ill deeds of his predecessor, former Democratic Gov. Edwin Edwards, who was sentenced to a 10-year jail term for extorting payoffs for casino licenses. Virginia hasn’t had any major gambling issues emerge during McDonnell’s three years in office.

Adelson also cares about energy, bankrolling an industry-backed organization this year aimed at expanding oil production. McDonnell made a top priority of opening the waters of Virginia’s coast to offshore drilling and has been friendly to oil companies in general. Jindal, from oil-dependent Louisiana, has also been very friendly to the industry. Even while slamming BP during the Gulf oil spill, Jindal agitated to get the Obama administration to lift its moratorium on new offshore drilling. We’ll call that a tie. Meanwhile, Kasich believes in global warming, so that’s probably bad news for him.

On Israel, the issue Adelson probably cares most about, all three are probably equally acceptable, embracing the GOP’s hawkish stance. All three have met with Prime Minister Benjamin Netanyahu at some point, though McDonnell may be the only one who has traveled to the country in an official capacity.

McDonnell is probably the stronger candidate at the moment anyway. He heads the Republican Governors Association, has strong approval ratings, hails from a key swing state and has none of the Bush-baggage Kasich does.

Not mentioned in Vogel’s reporting is New Jersey Gov. Chris Christie. He fits the bill as a governor, but may be too moderate for arch-conservative Adelson. The same could be said for former Florida Gov. Jeb Bush. Of course, given Adelson’s track record of picking candidates, he could always go for Brewer or someone equally unlikely. He was  a big donor to Rick Santorum's Senate campaigns. Maybe Gingrich wants to run again.