With her new album "Warrior," Ke$ha proves she has evolved from a wild child into a wistful, (still cheeky) artist 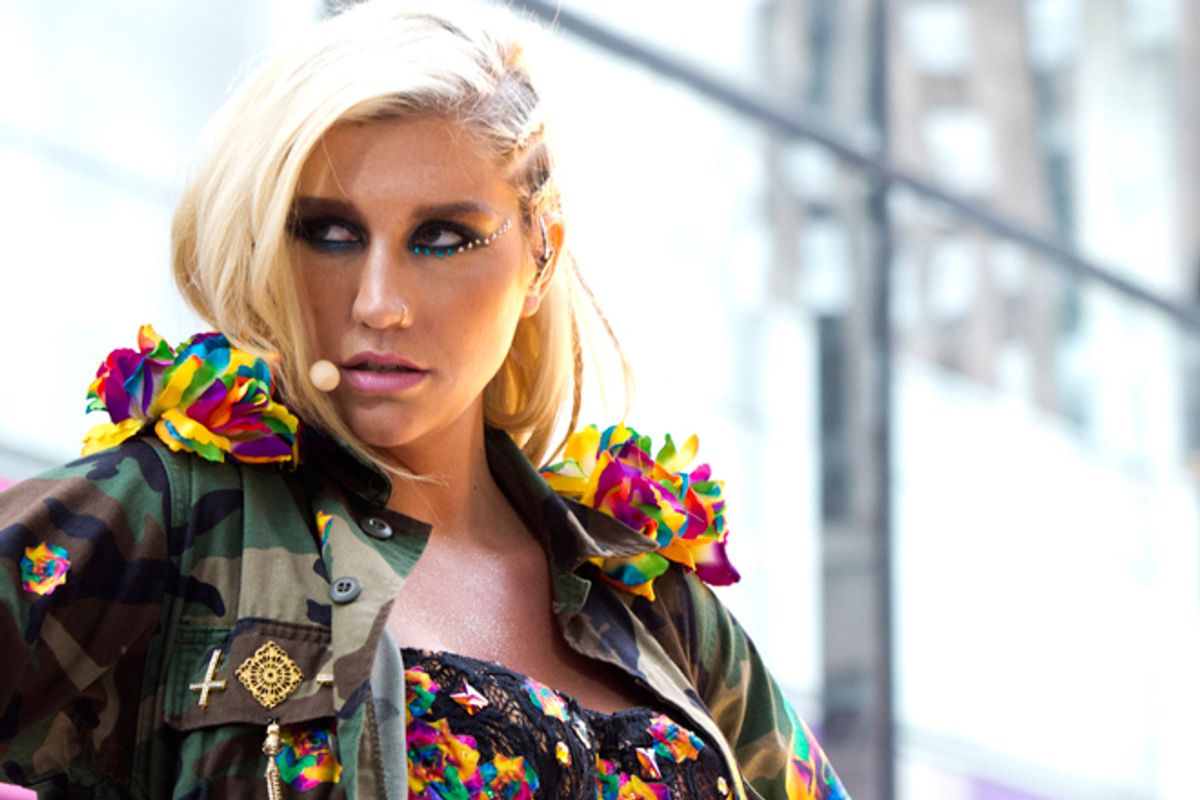 I recently caught a subdued cover of an old country song, "Old Flames Can’t Hold a Candle to You," on YouTube, a song made famous by Dolly Parton when it reached No. 1 on the Billboard country singles charts in 1980. This new cover features minimal piano and percussion, and a vulnerable female vocalist, who brings deep pathos to the lyrics. The performer of this understated YouTube cover? The daughter of the song’s co-writer, Pebe Sebert, a musician better known by her blinged moniker, Ke$ha.

Certainly, the performance is a sincere tribute to her mom. But on a broader scale, the "Old Flames" cover (which appears on the new "Deconstructed" EP, which is itself a companion to the new "Warrior," Ke$ha’s second full-length album) represents a savvy bit of marketing. Both "Warrior" and "Deconstructed" aim to legitimize the 25-year-old as a pop artist on par with Lady Gaga or Pink, both of whom are respected for their talent and envelope-pushing. Although Ke$ha’s rabid fans (known as “Animals”) need no convincing about their idol’s vocal and songwriting skills, plenty of others have never gotten beyond her first hit "Tik Tok" — in which she portrayed a sloppy, debauched party denizen brushing her teeth “with a bottle of Jack” — and her don’t-give-a-fuck demeanor.

In a perfect world, "Warrior" would silence naysayers. Sonically, the album combines sleek bubblegum electro, sparkling Europop and brash rock 'n' roll – highlighted by the guitar-grimy love song "Only Wanna Dance With You" (which features two members of the Strokes) and the digi-funk/’80s gold hybrid "Supernatural." (Trainspotters, take note: The latter gives partial lyrical credit to Nik Kershaw, mainly because of similarities to his ‘80s hit "Wouldn’t It Be Good.") Iggy Pop cameos on (and co-wrote) the feral soul-punk duet “Dirty Love” — whose lyrics and naughty revue vibe celebrate exactly what the title implies — and "C’Mon" is a come-hither seduction (“Feeling like I’m a high schooler/Sipping on a warm wine cooler”) cloaked in a bratty spoken-word delivery and dance-floor-friendly production. It’s modern pop that’s not sterile or stifled.

But overall, "Warrior" tones down Ke$ha’s wild-child act. This evolution doesn’t mean she’s gone soft; on the contrary, it means she’s seeking out more enduring pleasure. "Animal," from 2010, spoke of gloriously reckless youth — crashing parties, staying out all night, and dealing with backstabbing friends, loser boyfriends and pounding hangovers — but many of Ke$ha’s new songs reminisce about finding love or ruminate on enlightenment. "Wherever You Are" speaks wistfully of a past summer love; "Only Wanna Dance With You" admits falling hard for one guy; and the ballad "Wonderland" is an affecting, nostalgic look at Ke$ha’s pre-fame days. The album-closing "Love Into the Light" even talks about letting go of the past and focusing on the positive — in fact, Ke$ha muses, “Can't we all get over ourselves / And just stop talking shit?”

That’s not a rhetorical question: Ke$ha’s many detractors have been particularly vicious in their criticism of her. She’s been called trashy, a skank, a whore and worse, and regularly criticized for everything from her outfits to her use of Auto-Tune to her interviews. (Rather memorably, she told Us Weekly about breaking into Prince’s house to give him a demo and throwing up in Paris Hilton’s closet.)

Much of this sexist vitriol stems from fear of Ke$ha’s confidence. She is unapologetic about her self-assurance (both "We R Who We R" and the new album’s title track celebrate letting your freak flag fly) and doesn’t suffer fools gladly — especially male fools. She’s empowered by reclaiming traditionally masculine insults and terminology — calling a cheating boyfriend a “slut,” referencing her own “junk” and telling another loser to “suck my dick” — as well as symbolism. The iconic image of a “gold Trans Am” features prominently in multiple songs as a symbol of freedom (a place for sexual liberation and physical escape) and even titles a booming, Beastie Boys–meets–classic rock bonus cut on "Warrior."

But many of Ke$ha’s detractors seem to hate her for the very qualities that make her so likable: how down-to-earth and unpolished she is. She doesn’t take herself that seriously, for starters, and her cheeky sense of humor is often overlooked. The video for "Blow" featured unicorns, makeouts, rainbow-spewing guns and James Van Der Beek(!), while the song "Dinosaur" playfully mocks old dudes who hit on younger women: “Hitting on me, what?/You need a CAT scan.” Another older song, "Stephen," is even an account of how insane she got over a guy who wouldn’t return her affection. The song devolves into absurdity that’s reminiscent of a tune by Ben Folds (whom Ke$ha recently joined onstage in Nashville).

In other words, Ke$ha’s entire persona is predicated on being a normal person who's not ashamed of being sort of awkward and, at times, a mess. If Lady Gaga is a mother figure for misfits — someone who uses her stardom to both protect and elevate outsiders — Ke$ha is akin to Winona Ryder’s character in "Heathers": a double agent infiltrating the Top 40, playing the pop game even as she sabotages it from the inside with subversion. She’s not an untouchable pop star, but instead represents anybody who aspires to an attainable version of fabulous — someone who has the guts to tell off cheating jerks, perhaps, or is fortunate enough to have a gaggle of good friends. Ke$ha too would rather be at a raging house party with pals instead of getting bottle service at a club.

It’s fitting that on the recent American Music Awards, effervescent musical chameleon Cyndi Lauper introduced Ke$ha’s riotous performance of "Die Young." Lauper detailed in her recent memoir how she had to fight tooth and nail to maintain her individuality and creative freedom throughout her career, a struggle that opened the doors for other quirky, stubborn artists to find success on their own terms. And like Lauper, Ke$ha isn’t one-dimensional or predictable. On the "Warrior" song "Crazy Kids," she whispers maniacally, “We are the crazy people!” right before seguing into a boastful rap. Earlier this year, she covered Bob Dylan’s “Don’t Think Twice, It’s All Right” — and then several months later collaborated with Flaming Lips  on an abstract electro-clash drone track. And now with the release of "Warrior," Ke$ha is finally poised to receive respect for her talents — individuality firmly intact.