Sushi really does kill your brain 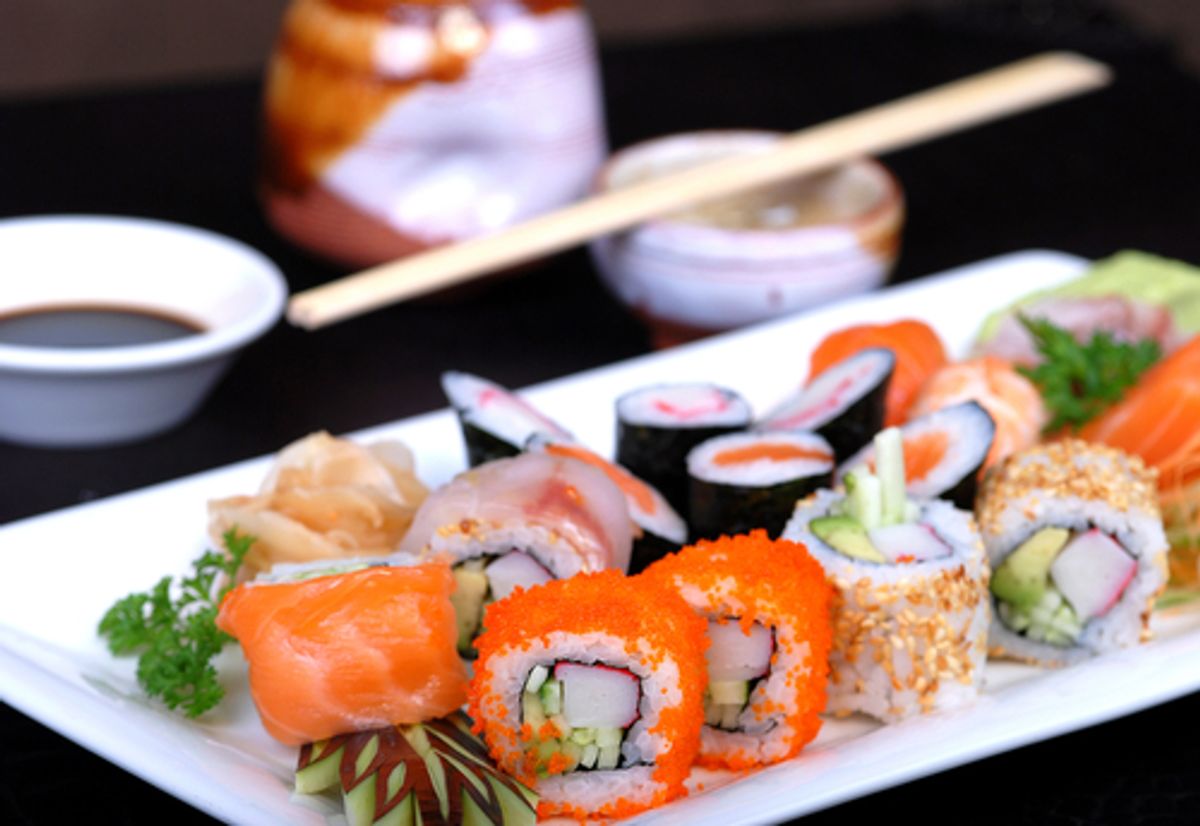 BRUSSELS, Belgium — Can eating too much sushi reduce your brain power?

Mercury contamination in big fish such as sharks, swordfish and certain types of tuna is on the rise, and smaller traces of the toxic metal may be enough to cause restricted brain development or other health problems for humans who eat them, according to data released Tuesday.

"Levels of exposure that are defined as safe by the official limits, are actually having adverse effects," said Dr. Edward Groth, author of one of two new reports published ahead of a United Nations conference on mercury pollution.

"These are not trivial effects, these are significant effects," Groth, an adviser to the World Health Organization, told journalists in a Web conference. "There does appear to be evidence now, fairly persuasive evidence, that adverse effects occur from normal amounts of seafood consumption."

Scientists have warned about the potential dangers of mercury in seafood since the 1950s when mercury-contaminated waste water was dumped in the sea from a factory in Minamata, Japan. Thousands suffered poisoning, which in extreme cases led to insanity, deformation and death. Many children whose mothers had eaten contaminated fish were born with severe disabilities.

The mercury levels at Minamata were uniquely high, but since then scientists have sought to discover whether tiny traces of mercury found in seafood across the oceans could have an impact on the health of fish-eating humans.

Although little risk has been detected in most types of fish, the authorities have long warned vulnerable groups, such as pregnant women and small children, to limit their consumption of certain species of big ocean predators.

The European Union recommends pregnant or breastfeeding women not to eat tuna more than twice a week, while the US Food and Drug Administration says they should avoid shark, swordfish or king mackerel, although it says some tuna should be included in their diet.

Such guidelines are out of date and stricter rules are needed to avoid the risk that even low levels of mercury could lead to health issues such as impeded brain development in unborn children, according to the new reports which were produced by the Maine-based Biodiversity Research Institute and an international coalition of environmental campaign groups called the Zero Mercury Working Group.

"Recent studies have found adverse effects below exposure levels considered 'safe' just a few years ago," says one report. "Several of these studies clearly show that the consumption of ordinary amounts of fish with higher mercury levels can cause health risks to the developing foetus and children."

The reports call for a new international benchmark for safe mercury consumption, at around one-quarter of the current US recommended dosage. The authors suggest some species with particularly high average mercury levels, like marlin or Pacific bluefin tuna be left off the menu altogether, while others such as grouper or albacore tuna should be limited to one meal a month.

The fisheries industry frequently counters that mercury reports as scare-mongering by environmentalists and says any risk from mercury more than outweighed by the health benefits of eating more fish.

According to the US National Fisheries Institute, there has never been a confirmed case of mercury toxicity in the United States through eating commercial seafood. In contrast, it says 84,000 Americans die every year due to a lack of the omega-3 fatty acid commonly found in fish.

The authors of the new report insist they are not seeking to persuade people to stop eating fish. Indeed they agree fish is essential for healthy brain development in young children and the unborn. However the caution consumers to be more picky about which species they put on their plates.

"We need to stress the benefits of eating fish and tell people they should continue to do that," said Groth. "Pregnant women in particular can continue to eat fish, but as the evidence gets stronger that smaller doses of mercury can be harmful, consumers need to be better educated and more aware of which fish to choose."

Over two two-thirds of all commercial fish species have low levels of mercury and should be eaten regular, the reports say. That include haddock, salmon, cod, sardine, herring and sea bass.

The reports were released in preparation for a major event hosted by the UN in Geneva, Switzerland, next month which will attempt to draw up an international treaty to limit the use of mercury and eliminate the growing problem of mercury pollution.

“The level of mercury in the Pacific Ocean is projected to increase by 50 percent by 2050, if current pollution trends continue unabated,” Richard Gutierrez, executive director of Ban Toxics! a Filipino organization that is part of the zero mercury coalition.

“This is a wake-up call for all governments to stem the rising tide of mercury pollution and finalize a strong treaty.”

Scientists warn however that even if the treaty does introduce effective pollution controls, it could still take decades, even centuries, before some parts of the deep ocean will see major reductions in mercury levels.

"If we continue as we have been going with marine pollution, with time this is going to make it more and more difficult to find safe seafood," says Philippe Grandjean, chair of environmental medicine at the University of Southern Denmark and professor at Harvard School of Public Health.

"I think the the next generation would like us to do the best we can to clean up after ourselves to make sure that seafood in the long term is safe to consume and we are not polluting the brains of children in the next generation."