Everyone loves a shiny nose

We've tuned in to "Rudolph the Red-Nosed Reindeer" every year for five decades. What makes it so darn special? 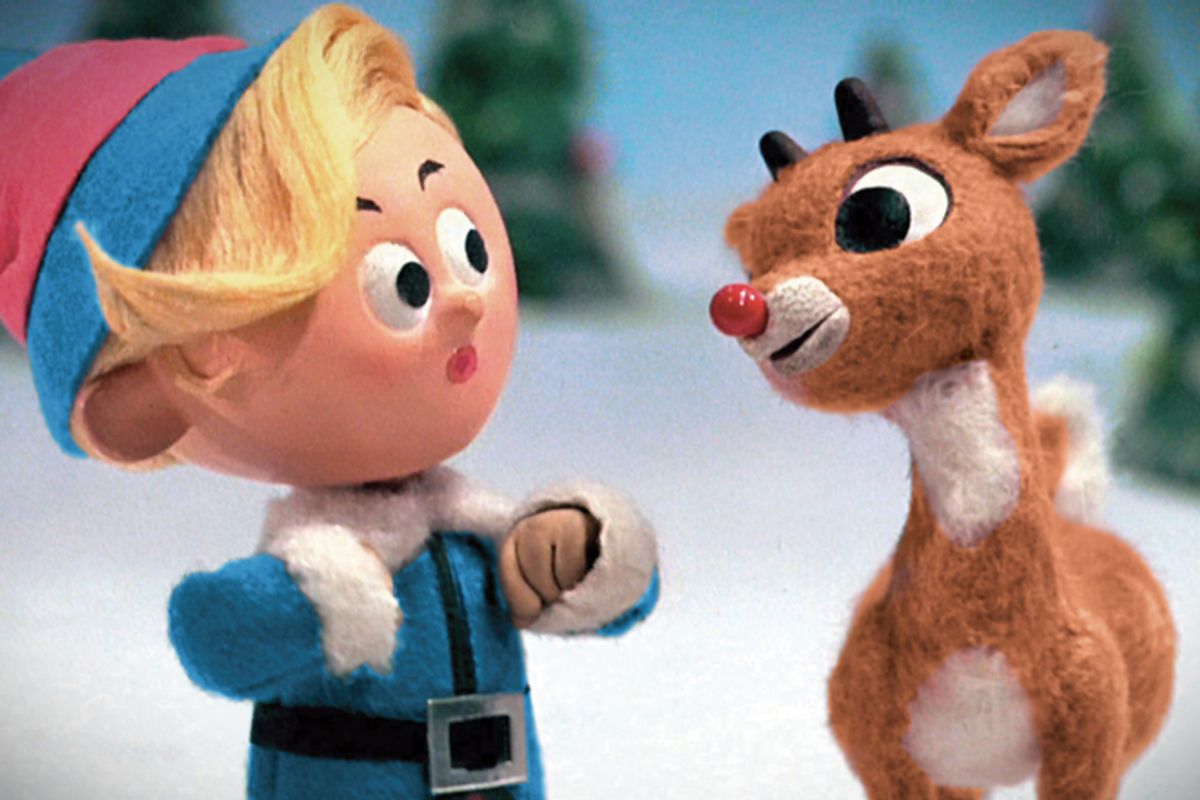 "Rudolph the Red-Nosed Reindeer," the beloved Christmas special that airs tonight on CBS, has, for 50 years, been one of the most anticipated holiday TV broadcast events — even in this day of DVR and Hulu. But little do many of us know, the hour-long, stop-motion animated musical film that would go on to become the highest-rated and longest-running television special, was originally made as a promotion for General Electric, a one-off Christmas special like the many that were airing in the 1960s at the time. We've grown up with its characters Hermey the Elf and Sam the Snowman, and its soundtrack (e.g., Burl Ives' "Silver and Gold" and "Holly Jolly Christmas") thanks to its annual airings. This December marks another month where once again you can't turn on the radio without hearing a song from its soundtrack, or walk into a store without seeing a product inspired by the show. How did this crudely animated special made for kids five decades ago become such an enduring — even thriving — part of our pop cultural landscape?

"There are a number of factors," explains Jon Favreau, the Hollywood director and actor behind such smashes as the "Iron Man" films, and the now-classic Christmas movie "Elf." "First of all, if you were a kid and there was something on TV for you, you tuned in." Favreau's interest in "Rudolph" began, as it did for so many others, when he was growing up in the 1960s. "There was no video or Internet to watch at another time.  When it aired on television was when you watched it. It was also paired up with the song (a big hit at the time), so there was a cultural awareness of it. In addition, there was something interesting and appealing about the stop-motion animation, which is basically movie magic coming to life in front of your eyes. On top of all of those things, it's the message; the classic Joseph Campbell, rise of the hero story line, which centered on Rudolph. He's pure, a hero of a thousand faces."

Before the special, the bare-bones story of Rudolph, who at his core is a dejected reindeer with a glowing nose who saves Christmas, existed originally in the form of a book written by Robert L. May in 1939 and was published as a promotion for the now-defunct department store Montgomery Ward. From there, Johnny Marks wrote a song about Rudolph, which was made famous by Gene Autry and hit No. 1 on the Billboard charts exactly 10 years later. Then, about a decade later, the idea of the special was born, and premiered on NBC for the very first time at 5:30 p.m. on Dec. 6, 1964.

Rick Goldschmidt knows all too well about the legend of the "Rudolph" special. He wrote an entire book about it, titled "Rudolph the Red-Nose Reindeer: The Making of the Rankin/Bass Holiday Classic," and is the official historian for Rankin/Bass, the studio behind the film. "Every year, reaction to the special gets stronger," Goldschmidt tells me. "I think people like the more innocent times Rankin/Bass represents. You can't help but go back and focus on something that's done so well. Most of the productions done by Rankin/Bass were done really well."

Rankin/Bass is Arthur Rankin Jr. and Jules Bass, the producing team and heart and soul behind the special. They pioneered stop-motion animation (back then dubbed Animagic) and later went on to create other Christmas classics including "The Year Without a Santa Claus" and "Frosty the Snowman" specials, as well as the '80s "Thundercats" TV show, and many other projects. Goldschmidt says the reason why Rudolph and the Island of Misfit Toys resonates today is because Rankin and Bass hired the best talent at the time to work on it, including Johnny Marks who wrote a variety of follow-up songs for the team after his initial hit.

"They also hired these classic New York artists like Jack Davis, Paul Coker Jr, Al Hirschfeld and Frank Frazetta, so that's why it has such a lasting quality. They had top caliber people on board to make these things. It's not like today, when you try to get the cheapest product and make the most money off of it. Rankin/Bass wasn't built like that; they made sure everybody they worked with was the best at what they were doing," says Goldschmidt.

Voice actors were rounded up from Canada, and visuals were shot, oddly enough, in Tokyo. The entire thing was put together in New York, and behind-the-scenes photographs show a "Mad Men"-like atmosphere. "Rankin and Bass didn't know this was going to be their legacy, and that 'Rudolph' was all people were going to talk about," explains Goldschmidt of the duo's current reaction to the popularity of the special. "They worked on so many other things. But now they've embraced all of the admiration."

Admiration for the special comes in many forms, whether it's the fact it always dominates in the ratings, the swift DVD and merchandise sales, or the recent numerous nods in pop culture. On TV, Bing and Verizon have both released commercials that pay homage to the special, and the Aflac insurance company produced a commercial that runs today (and which Goldschmidt says got the voices very close, thanks to some talented impersonators). In 2010, NBC's "Community" produced an entire episode stop-motion in the style of "Rudolph," and let us not forget Favreau's "Elf," which has entered the annual rotation of holiday classics.

"'Rudolph' was a big part of the inspiration for 'Elf' and my take on it," Favreau explains. "When I was interviewing with New Line for the gig, it was my whole angle. The story is about a guy who was raised by elves, but in actuality he's a guy growing up in a Rankin/Bass Christmas special, and I thought that contrast was really comedic and fun." Favreau says practically the entire movie, from the snowman narrator, to the music, the story, and even the way they shot it is an homage to "Rudolph." "For the North Pole scenes, we designed the set to look like a stop-motion set. I wanted to use all real lighting and practical puppets, no CGI, which at the time there was a lot of pressure to do. We tried to mimic the jitteriness of the animation, and even got the rights to the costumes." In the end, Favreau says “Elf” is his “proudest accomplishment.”

However, when "Elf" was released, no one thought it was going to be the runaway box office smash it became, and Favreau notes there was little marketing behind it, "not even a lunchbox," compared to today when, among other things, an “Elf” musical is currently running on Broadway.  The release of Rudolph mimics that scenario; besides a scarcely produced album released when the special premiered, it wasn't until a toy line made exclusively for CVS became the first widely available products in 1998. "The toy company, Stuffins, started it all," explains Goldschmidt. "The guy who owned it said he was reading my book on the way to Japan for a toy fair, and decided to do the Rudolph characters because he read that they never marketed anything. From there, it just went out of control. Now, there's so many things out there I could never even buy a quarter of them."

Goldschmidt's house is a virtual goldmine of Rankin/Bass memorabilia. He started out as an artist and fan, and proposed the idea to write a book about "Rudolph" to Arthur Rankin, who gave him his blessing. Since then, it's become his full-time career; an amusing fact to his two grown children: "My kids are 21 and 18, and I don't think they really understood it for a long time. I took them to a bunch of the conventions and book signings, and they were surprised how many people knew me from what I've done and written, and were in awe of these specials; it was eye opening for them. Now, coincidentally, my daughter's boyfriend's family are big Rudolph fans."

"Rudolph the Red Nosed Reindeer" is airing for the 48th time on broadcast TV, tonight on CBS, and you can be sure that Goldschmidt and Favreau, along with many of the adults and kids across the country, will be tuning in because, most simply, as Favreau explains, "The 'Rudolph' special is a pop culture phenomenon. It's just part of our lexicon."