Why can Limbaugh speak, but not Costas?

Conservatives get outraged when a celebrity talks politics, as long as it's not one of their "expert" entertainers 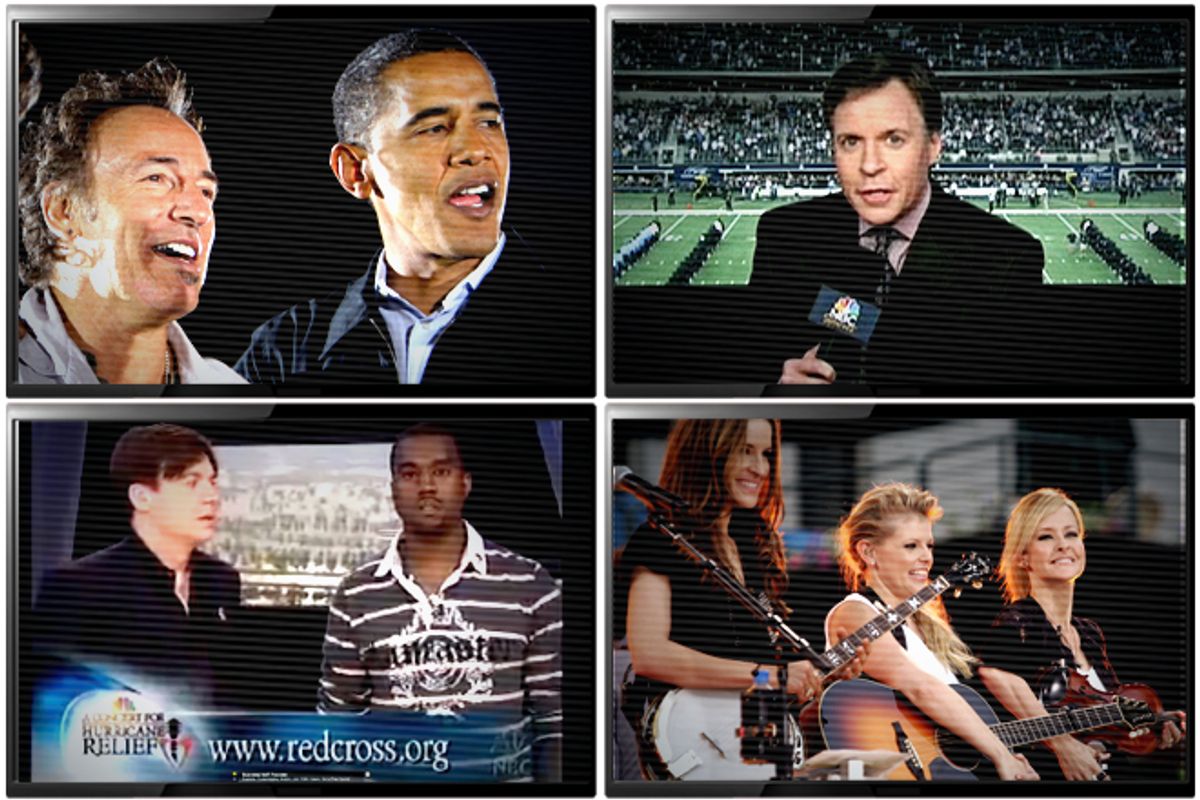 One way to understand Bob Costas' comments about gun violence during halftime of NBC's Sunday evening football game is to interpret them as yet another example of media self-absorption. And in fact, by turning a horrific story of domestic violence and suicide into a cheap story about the overwrought reaction to a professional commentator, the national press did proudly fulfill the timeless jeremiad of "Broadcast News" to "never forget (that) we're the real story, not them."

But as repulsive and predictable as that narcissism is, it did inadvertently spotlight a significant problem plaguing our civic discourse. Call it Shut Up and Sing Syndrome.

Named after a Laura Ingraham book and a 2006 documentary about the harsh reaction to the Dixie Chicks' anti-Bush comments, this syndrome condemns many Americans to believe that actors, musicians and athletes -- really, anyone not deemed political "experts" -- have no right to use their platform to address issues considered "political" in nature. In this case, conservatives are insisting that Costas is not merely wrong on the substance of his gun-related comments, but also that, according to the New York Times, "it was inappropriate to use the platform of an NFL telecast to make arguments concerning a hot-button issue like gun control."

The insinuation is that as a sportscaster, he has no standing to weigh in on a political issue. In other words, like critics of outspoken athletes who tell them to "shut up and play," critics want Costas to simply "shut up and talk only about sports."

For his part, Costas is refusing to be intimidated, pointing out that such whiners “would have thought (my comment) was fine if they agreed with what I was saying.” This is almost certainly true, once again reminding us that Shut Up and Sing Syndrome tends only to emerge on the right when a prominent figure says something that offends conservative sensibilities, but rarely emerges when a prominent figure says something that conservatives support.

Clearly, then, the syndrome is rooted less in principle than in ideology. And yet, even if the underlying principle was applied dispassionately and consistently, it is still problematic. In a democratic society, after all, every citizen is entitled to a voice, and they are entitled to that voice without having to first secure a "political expert" credential or label from a higher authority.

In concrete terms that means Costas is no less entitled to speak about public issues on the public airwaves than Glenn Beck and Rush Limbaugh -- and that's true even though the latter two are billed as "political" and Costas isn't. To insist otherwise -- to insist that Costas has no right while self-ordained "political experts" do -- is to champion a hegemonic view of the public square. That is, a view implying that only certain pre-approved political elites have a right to make their voices heard.

The same goes for the manufactured outrage over the setting of Costas' comment. Critics insist that an NFL broadcast is supposedly a sacrosanct and therefore apolitical space that must remain free of "hot-button issues." But, then, in commenting on the Kansas City Chiefs' murder-suicide, Costas was merely weighing in on the biggest NFL story of the day -- which is exactly what he's paid to do and what typically happens during an NFL halftime show.

Additionally, despite paeans to the supposedly apolitical nature of football media, there are plenty of highly charged political issues in the most mundane of NFL broadcasts, even if those issues seem invisible. Just this year, for instance, televised criticism of replacement refs provided a subtle political commentary on labor relations. Likewise, the Super Bowl has become one giant politicized ad for the military. And, of course, one could argue that the very decision to broadcast professional football games, and to specifically glorify the bone-crushing hits, is a controversial -- and increasingly political -- decision to continue uncritically promoting a game even as science discovers more about that game's tragic human consequences.

None of this suggests you have to agree with Costas on the gun issue, or that the substance of his comments should be immune from criticism. It is only to suggest that (despite niche content branding to the contrary) there are no longer clear boundaries between sports, culture, entertainment and politics. Modern America is a place where an actor can become president, a pro wrestler can become a governor, a football player can become a congressman, and a comedian can become a U.S. senator. It is a place where a musician can make the single most memorable statement about the politics of a natural disaster, and where actors routinely craft political messages via their films.

It is a place, in short, where no one set of citizens has -- or should have -- an entitled monopoly on political opinion. All of us, including Bob Costas, have a right to try to make our voices heard, no matter how much the Shut Up and Sing crowd tells us to pipe down.