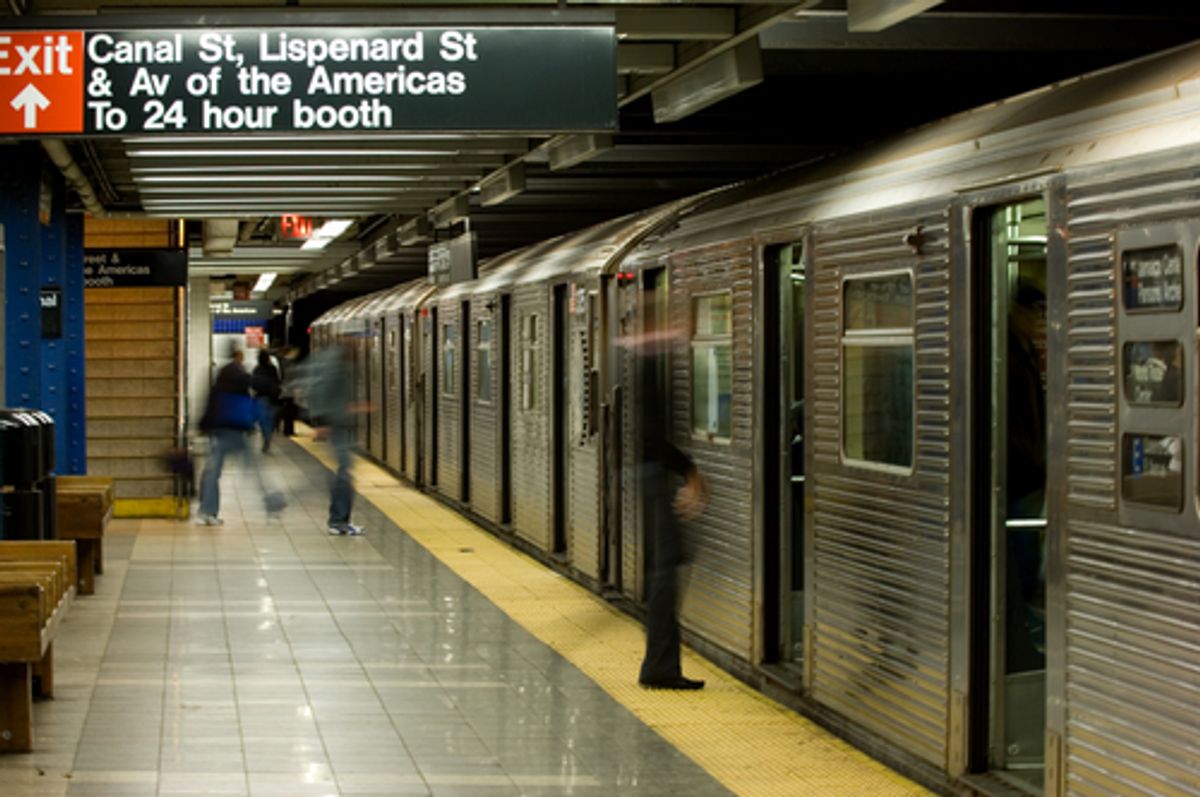 NEW YORK (AP) -- A homeless man was arrested Wednesday in the death of a subway rider who was pushed onto the tracks and photographed just before a train struck him.

Davis was arrested on a second-degree murder charge. He was in custody, and it wasn't immediately clear if he had a lawyer. It also wasn't clear when he would appear in court. He has several prior arrests in New York and Pennsylvania on mostly minor charges including drug possession.

Witnesses told investigators they saw a man talking to himself Monday afternoon before he approached the 58-year-old Han of Queens at the Times Square station, got into an altercation with him and pushed him into the train's path.

The New York Post published a photo on its front page Tuesday of Han with his head turned toward the train, his arms reaching up but unable to climb off the tracks in time. It was shot by freelance photographer R. Umar Abbasi, who was waiting to catch a train.

Abbasi told NBC's "Today" show Wednesday that he was trying to alert the motorman to what was going on by flashing his camera.

He said he was shocked that people nearer to the victim didn't try to help in the 22 seconds before the train struck.

"It took me a second to figure out what was happening ... I saw the lights in the distance. My mind was to alert the train," Abbasi said.

"The people who were standing close to him ... they could have moved and grabbed him and pulled him up. No one made an effort," he added.

Trains generally arrive at the stations going 25 mph, but it's not clear how fast the train was going when it struck Han. The waiting area is a narrower than other subway stations, but the platform is still about a dozen feet wide.

In a written account Abbasi gave the Post, he said a crowd took videos and snapped photos on their cellphones after Han was pulled, limp, onto the platform. He said he shoved them back as a doctor and another man tried to resuscitate the victim, but it was no use. The man died in front of Abbasi's eyes.

Mayor Michael Bloomberg said Tuesday that it appeared the suspect in Han's death had "a psychiatric problem."

The mayor said Han, "if I understand it, tried to break up a fight or something and paid for it with his life."

Subway pushes are feared but fairly unusual. Among the more high-profile cases was the January 1999 death of Kendra Webdale, who was shoved to her death by a former mental patient.

Straphangers on Wednesday said that they were shocked by Han's death but that it's always a silent fear for many of the more than 5.2 million commuters who ride the subway on an average weekday.

"Stuff like that you don't really think about every day. You know it could happen. So when it does happen it's scary but then what it all comes down to is you have to protect yourself," said Aliyah Syphrett, 23, who sat on a bench as she waited at Pennsylvania Station in Manhattan.

Diana Henry, 79, a Long Island resident, was waiting for a train at 34th Street. She stood as far from the platform as possible - about a dozen feet back, leaning against the wall.

"I'm always careful, but I'm even more careful after what happened," she said. "I stand back because there are so many crazies in this city that you never know."

Many said they didn't know what they would do in the same situation - if they'd try to help or if they'd be able to act fast enough.

In 2007, Wesley Autrey jumped onto the tracks when a train was approaching, saving the life of a man who fell unconscious off the platform. Autrey laid on top of the man as the train rolled over them barely above their heads. Autrey was hailed as a hero.