It's every pundit's favorite budget plan, but no one seems to know -- or care -- what it actually contains 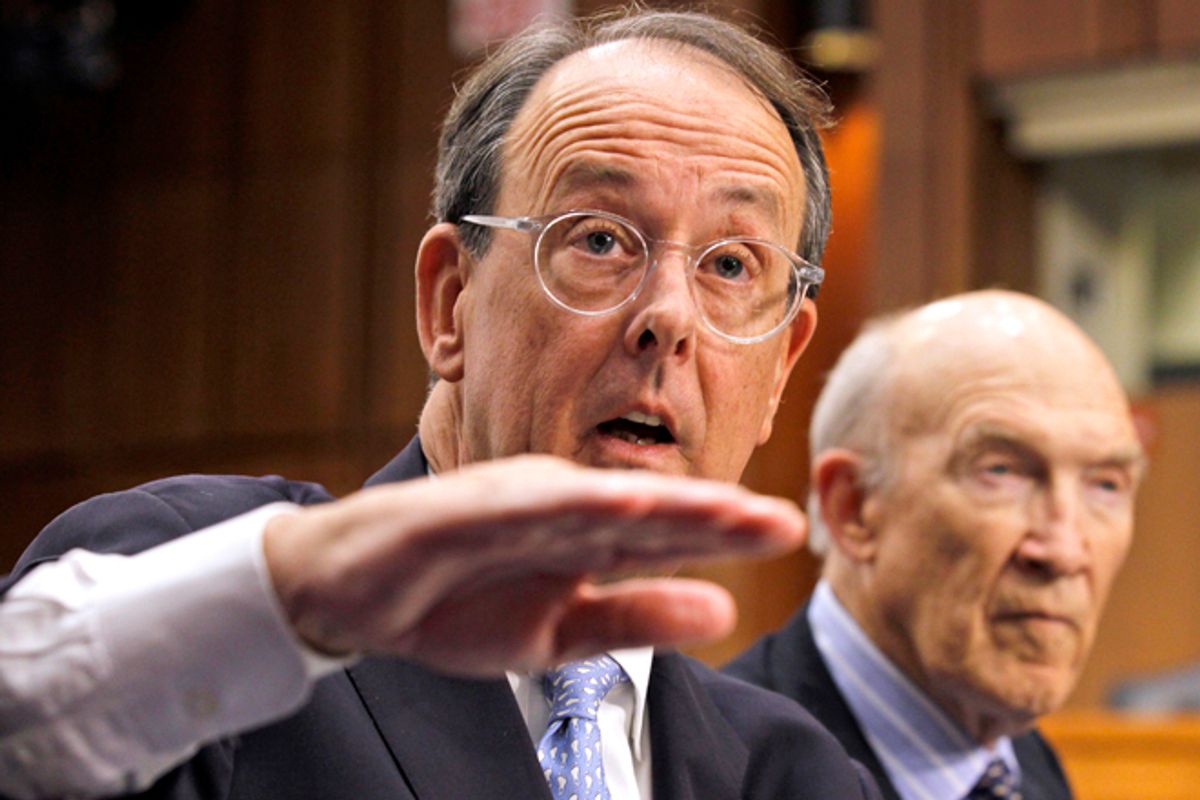 Not many people know this but "The Simpson-Bowles Plan" is magic. It is whatever you want it to be. It will fix the deficit and grow the economy and it does it without raising taxes on anyone, unless you want to raise taxes on some people, and then it does that. It cuts all government spending but in a way that doesn't hurt Medicare or The Troops. If you stand in front of a mirror and say "Simpson-Bowles" three times David Gergen and Gloria Borger appear out of nowhere and praise your wisdom and seriousness. "The Simpson-Bowles Plan" gives you Your Country Back and makes it the '90s again, or the '50s, or whatever past decade you wish it was, when things were better. Simpson and Bowles were two kindly wizards and they granted America three wishes but dumb Washington, D.C., is too Partisan to make the wishes. Obama and the Republicans need to Grow Up and Get Serious and Pass "The Simpson-Bowles Plan," everyone in America agrees.

That is basically the way the press and most of Washington talk about the deficit, the "fiscal cliff" and the deficit reduction "framework" endorsed by two old white guys named Simpson and Bowles. No one actually knows or cares what's in the actual Simpson-Bowles plan, but at this point it doesn't actually matter. Here's Fred Barnes counseling Republicans to endorse Simpson-Bowles despite the fact that it includes the expiration of all Bush tax cuts, a thing he does not support. Here's reasonable old David Gergen warning that Democrats are overreaching by asking for more than $1 trillion in new revenue, and invoking Simpson-Bowles yet again as an example of the Proper Way to do a Grand Bargain. Simpson-Bowles includes more than $2 trillion in new revenue.

The smarter Republicans have long since figured out that the entire deficit "debate" is an elaborate farce, which is why John Boehner just pretended to be offering something called "The Bowles Plan," though it was not actually a plan authored or endorsed by Mr. Bowles. Mitt Romney kept saying he loved the Simpson-Bowles Plan, though of course he would never have actually signed it into law had be been elected. (Not that it ever would've passed Congress!) He "had his own plan," which was probably going to be tax cuts and more defense spending. If Democrats want to get the big pundits on their side, they should pull a Boehner and just name whatever it is they're trying to pass "The Simpson Plan." That should be the name they use when they reintroduce card-check. And cap-and-trade. Planned Parenthood should rename itself "The Simpson-Bowles Planned Parenthood" and then no one will ever again try to defund it, I promise.

After two years of bizarrely timed deficit hysteria dominating cable news nearly every day, Americans as a whole are horribly ill-informed on all matters relating to the national debt and the competing proposals to lessen it. A majority of voters, bless them, have no opinion at all on "Simpson-Bowles," because they clearly have no clue what it is. Nearly a quarter of voters, though, have opinions on a made-up plan Public Policy Polling polled them on to make a point about how Washington's favorite plan is just a meaningless series of syllables to most normal people.

A much less scientific poll -- an online survey by Business Insider -- has an even more interesting result: A plurality of people believe that "going over the fiscal cliff" will increase the national deficit. Only 12 percent of people correctly said it would decrease the deficit, but this is what happens when conservatives and "moderates" spend years fear-mongering about the deficit and then suddenly tell everyone that they should be terrified of a series of policies that will radically reduce the deficit. People get confused!

But there is good money to be made in deficit fear-mongering, as Antonio Villaraigosa could tell you, thanks to Pete Peterson and his endless quest to finally raise everyone's retirement age.

So we are having a heated national debate over an issue no one actually really wants to address for real, tied to a mostly imaginary plan no one understands or supports. I'm still pretty sure the end result will be the extension of the Bush tax cuts, for everyone, and everyone will pat themselves on the back for a Job Well Done Fixing the Deficit.