5 groups who shouldn't be able to vote, according to Ted Nugent

Veterans, churchgoers and homeowners are just a few of the demented rocker's targets 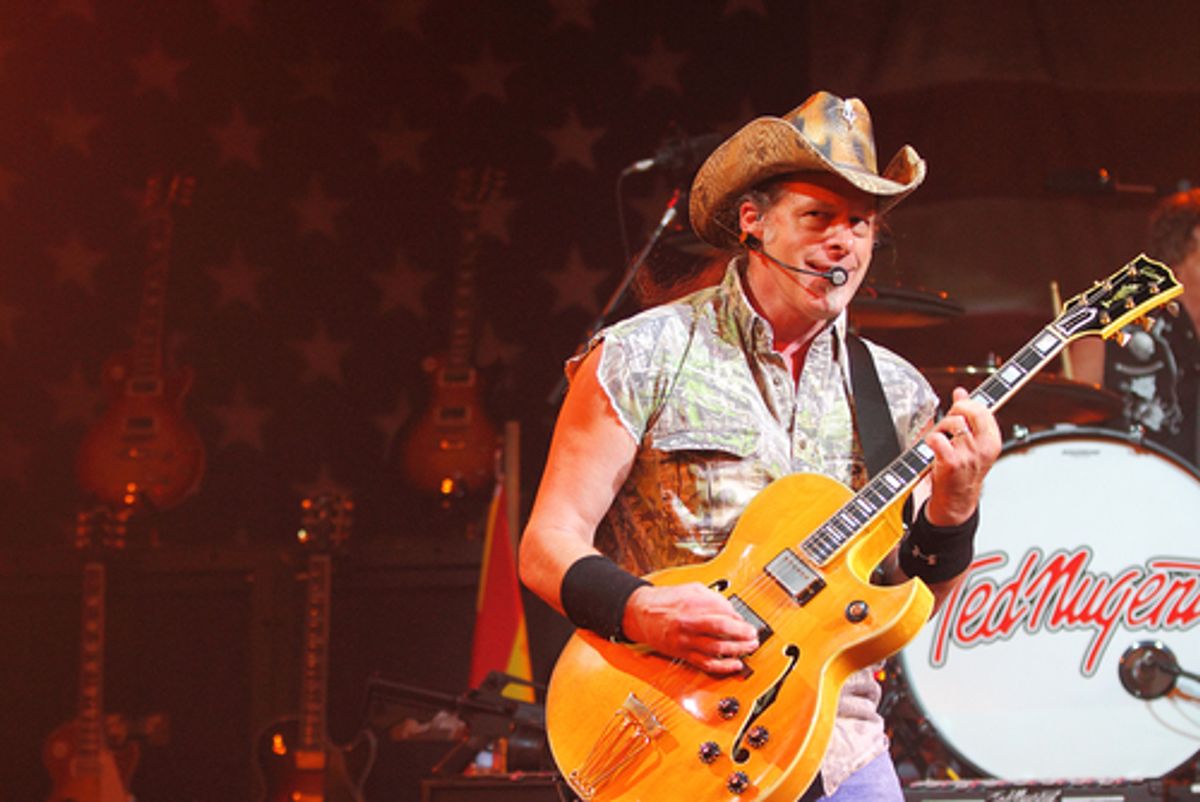 The American right has so embraced the “makers versus takers” narrative (entirely false from the get-go) that despite a lot of talk about soul-searching and trying to reach out to people who aren't old, white and angry, they're having a hard time keeping their true feelings from the public.

Washed-up, draft-dodging '70s rocker Ted Nugent has never tried to obscure his extremism, and this week he offered an idea that is supposedly related to a budget deal. After exposing his impressive ignorance of the federal budget, especially “entitlements," Nugent offered up a modest proposal:

Ted Nugent represents the lizard-brained id of the right. But this view is quite mainstream – Mitt Romney's explanation for his loss was that Obama offered the ne'er-do-wells too much “free stuff” to overcome. Romney took some heat for the statement, but that view is quite widespread in Republican circles these days.

First, a baseline: “welfare” --Temporary Assistance to Needy Families (TANF), including contributions from the states -- totaled $33.3 billion last year. It represented less than half of one percent of the federal budget.

1. People working for defense contractors (and their families). Who could forget the epic battle between the defense lobby and the Pentagon over an alternate engine for the F-35 fighter? The military didn't want it, said it was extraneous and an unaffordable luxury, and yet the Pentagon had to fight for two years against a lobbying juggernaut -- and its bought-and-paid-for legislators -- to kill the program. In the end, it probably only died because of the deficit hysteria that's swept Washington since a Democrat was elected to the White House in 2008.

Shouldn't we suspend these greedy parasites' right to vote until they get into another field?

2. Church-goers. The tax exemption for religious institutions costs taxpayers $71 billion per year, or about five times what the federal government dishes out for TANF. Why should church-goers get to vote on this ripoff?

3. Homeowners. Most economists from across the political spectrum agree that the mortgage insterest deduction is inefficient and regressive. But greedy homeowners keep electing politicians who protect it at all costs. At $105 billion last year, the deduction runs the federal government about seven times as much as welfare.

4. People in the fossil fuel business (and their families). It's hard to get an exact figure on how much we spend to subsidize the fossil fuel industry that's doing so very much to kill the planet. Do you include military assistance to Colombia that goes to protecting American oil companies' pipelines? Do you include the healthcare costs of people who suffer from asthma and other respiratory ailments as a result of its emissions?

5. Veterans. The Department of Veterans' Affairs Budget for 2011 was $120 billion, about eight times what the federal government spends on TANF. Why should those greedy disabled veterans be able to vote for politicians that want us, the taxpayers, to foot the bill for their frivolous healthcare?

Obviously, many of these things – tax exemptions for churches, the home mortgage deduction – are popular. But, contra Ted Nugent, so is helping the working poor (TANF recipients have to work in most cases). A study conducted earlier this year found that “87 percent of likely voters believe that helping the working poor should be a top or important priority of government.” Most weren't on "welfare."