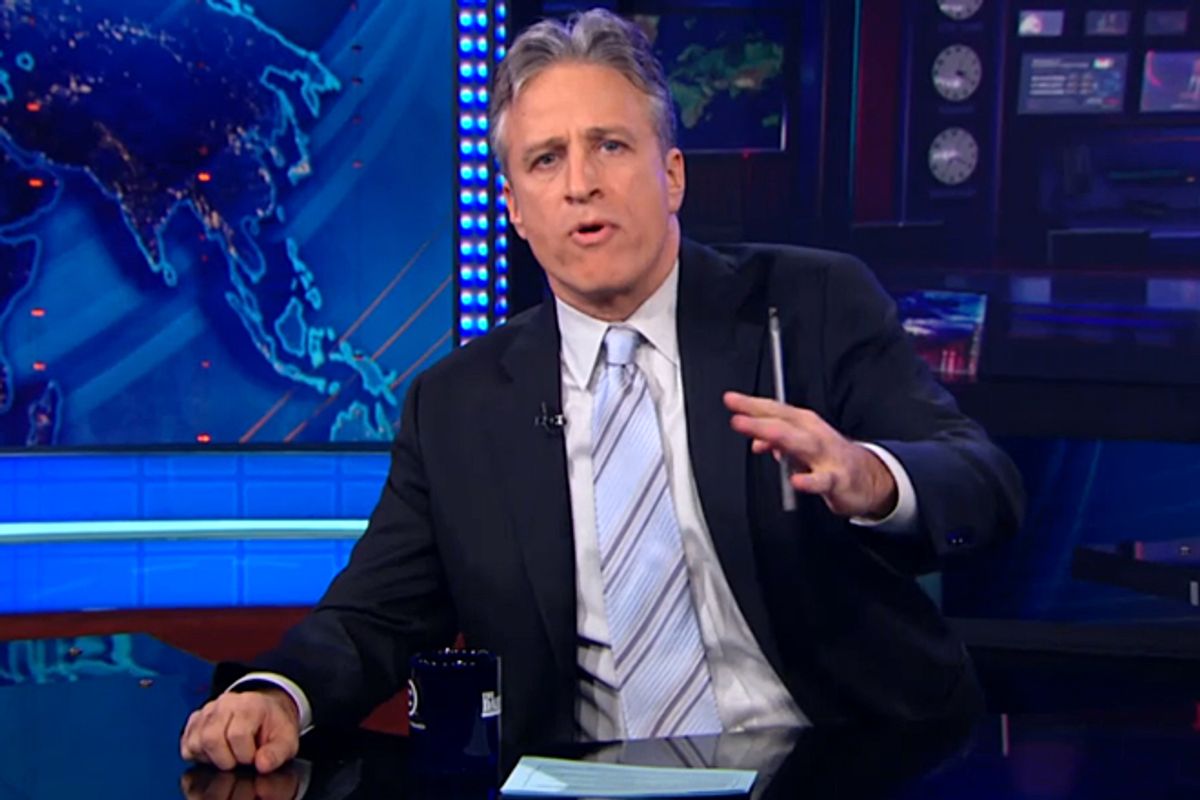 Crusty old Alan Simpson is on a crusade to get today's youth to care about the deficit as much as he does. It isn't easy, because the kids today are all too busy playing Mario Kart on their XBoxes and listening to Ke$ha on their Zunes and "dropping ecstasy" at their "rainbow parties" and Icing Bros and "ghostriding the whip" and cyberbullying to concern themselves with matters as grave as our national debt. But Simpson is determined to get them to care, and to prove he's "with it," he's recently done the two things today's "Millennials" love best: the Gangnam Style dance and appearing on Comedy Central's "The Daily Show."

The Gangnam dance thing was done on behalf of a transparently phony Pete Peterson-funded "youth organization" operated by old rich people, and you really don't need to see the stupid video. The "Daily Show" interview aired last night, and it was depressing.

Jon Stewart was at his fawning and obsequious worst. Stewart even gave him the extended online-only interview that he does for his Most Important and Serious Guests. It's practically painful to watch.

Stewart's very first question is a mess. After a brief and mostly true account of the disaster that was the Simpson-Bowles committee, Stewart reveals that he thinks Simpson's sudden post-election omnipresence is the result of an organic growth of support for his plan and widespread reverence for his wisdom. It's actually just the most visible arm of a massive lobbying and P.R. campaign spearheaded and funded by Wall Street CEOs and crazy old Peterson. Stewart seems to think the people are running to Alan Simpson because his plan will help us avert the supposed "fiscal cliff." The problem with the "fiscal cliff" -- the reason we want to avoid it -- is that it is deficit-reducing austerity, and that would harm our struggling economy. The Simpson-Bowles Plan is, similarly, deficit-reducing austerity. (Though unlike the "sequestration" spending cuts and expiration of the Bush tax cuts that make up the "cliff," it never actually passed Congress.)

Stewart does at least challenge Simpson on raising the Social Security retirement age, an entirely regressive move that ignores the fact that the less wealthy have on average shorter lifespans than former senators (and talk show hosts), but Simpson was easily able to spin the rest of his reforms to the program that Washington is desperate to "reform," including the benefit cut euphemistically referred to as a minor "tweak" to the inflation measure. (A "tweak" that means ... less money, for old people.)

When Stewart asks, indirectly, if austerity is really better right now than stimulus, Simpson just invokes the imaginary market debt vigilantes who will destroy America in their wisdom if we attempt to rebuild our bridges and schools and things before we've gutted entitlements (and lowered the corporate tax rate, to fix the deficit). Then comes inflation! Stewart moves on.

Simpson's salty humor helps everything he says sound ever so common-sensical and he's got a gift for sounding like he's speaking important, hard truths that only he has the guts to say aloud, but his common sense and hard truths are dubious political preferences based on a conservative philosophy. He is selling a stingier America that does less for its citizens. The only thing you actually need to know about Simpson-Bowles is that no one in Washington supports it -- usually with good reason -- but it's so reverently covered that everyone constantly has to pretend they support it, and the two men who affixed their names on it.