Don't count out angry white guys quite yet

Dems have a lot of leverage in the "fiscal cliff" standoff after the election. That doesn't mean the GOP yields 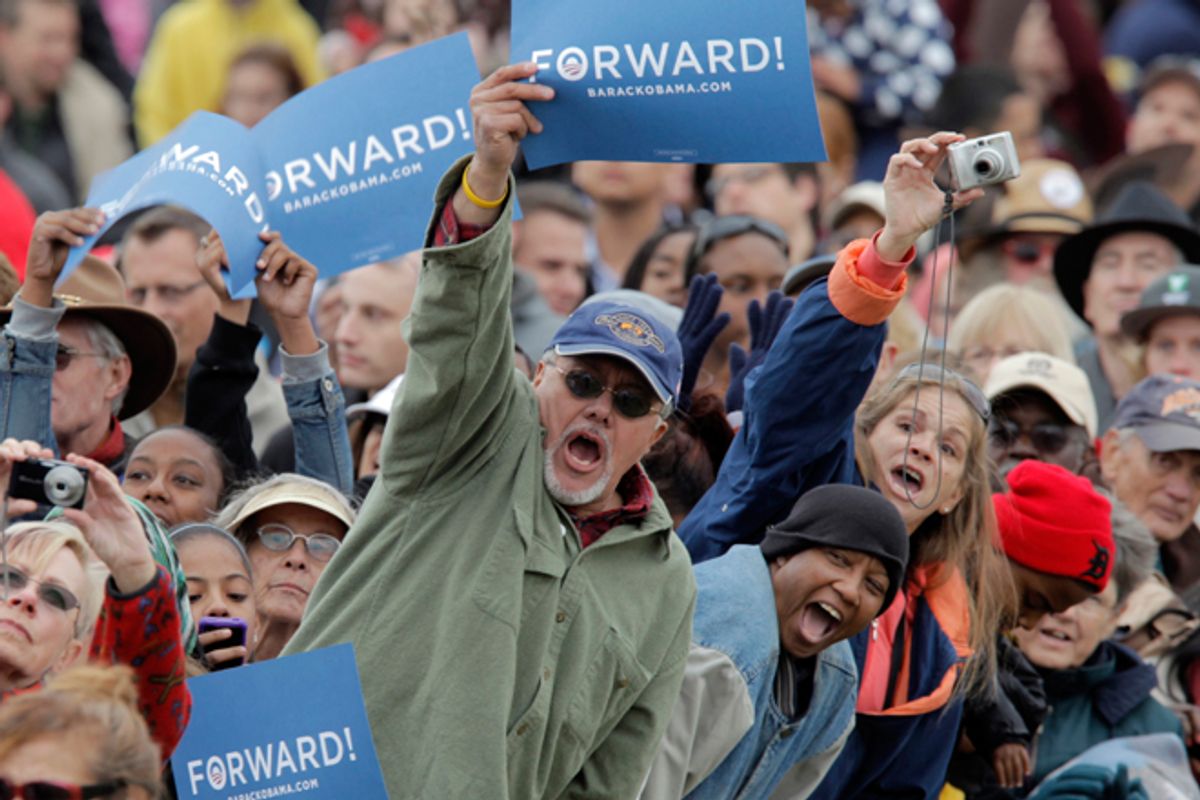 Earlier this week, John Boehner opened his fiscal cliff counteroffer to President Obama by claiming that it had been a “status quo election in which both you and the Republican majority in the House were re-elected.” Democrats and progressives, who have spent the last month crowing about Republican’s self-marginalization as the party of aging white men, obviously beg to differ -- both about who holds the leverage in the ongoing tax rate and debt ceiling standoffs and how the election plays into it. Are they being overconfident, or will the Obama coalition we saw turn out a month ago hold?

As the last of the post-election data sifts and behind-the-scenes campaign reveals trickle out and the political class tries to figure out the new normal, it’s a good time to take stock.

Liberals are thrilled to see a toughened Obama use his strengthened hand against Republican intransigence, which they see as bolstered by an election day mandate. Greg Sargent at the Washington Post put it this way: “The argument is straightforward: This isn’t 2011 anymore. Last time, Republicans had won an election; this time, Obama and Democrats won. Polls show the public increasingly sees Republicans as the intransigent party and the primary obstacle to compromise in Washington.” And Frank Rich was equally dismissive of the Republicans’ bargaining power: “Everyone knows the Republicans are going to fold — the Republicans know they are going to fold — and the only question to be resolved is when and on what terms. They have zero leverage. It’s not only that they lost the election; they continue to decline in national polls, with the latest Pew survey showing that 53 percent of Americans will blame the GOP (and only 27 percent will blame President Obama) if there’s no deal by January.” Even plenty of Republicans are pessimistic: “Now more than ever, Republicans should know better than to pretend polls aren’t telling them something,” wrote John Podhoretz glumly.

But House members aren’t elected by national polls, and thanks to gerrymandering into safe districts that helped Republicans hold the House last month, they still may have more to fear from their right flank in the event of a compromise. And the prior particulars of this current skirmish favor the Democrats: Taxes going up on everyone on January 1 over their desire to keep tax cuts for the rich looks bad just after you lost by running an out-of-touch rich guy for president.  As Republican Rep. James Lankford admitted to the Times, “It’s a terrible position because by default, Democrats get what they want.” This is a crisis of Republicans’ making that they’ve boxed themselves into; future battles might not not be so deliciously karmic.

Of course, the long-term demographic trends that, combined with a killer turnout game helped re-elect the president -- despite Republicans’ innumerate overconfidence --  still exist. Just how that created (or confirmed) an “Obama coalition” is elucidated in a just-released report by Ruy Teixeira and John Halpin, who can justly claim to have called those trends long before Republicans had to remember that Latino voters exist.

While many pollsters erroneously believed that the share of the white vote, for example, would remain stable, their 2011 report, “The Path to 270” projected that in 2012, the following math would favor Obama: an increase of 2 percent in the share of voters of color, fewer white working-class voters, and a small uptick in white college graduate voters. “According to the 2012 exit polls, that is exactly what happened,” they write in the new report. “With the re-election of President Barack Obama in 2012, this progressive coalition has clearly emerged, albeit in an early and tenuous stage.”

That last qualifier also matters in figuring out just what that progressive coalition can do and how it can be harnessed, especially with coming state-level and local races and in future legislative battles that may divide those disparate constituencies -- or leave them disengaged. For example, much was rightly made of the gender gap, but specificity matters: As Teixeira and Halpin note, President Obama actually lost white college-graduate women after winning them in 2008: “Among women in this demographic, his margin declined from 52 percent to 47 percent in 2008, to 46 percent to 52 percent in 2012.” (Romney also won the white working class, where he gained men compared to McCain, but not enough working class white women were in his ranks to make a difference from 2008.)  As John Cassidy pointed out just after the election, white women overall have broken with the overall “gender gap” dynamic: Bush won 55 percent of white women in 2004.

The most reliable Obama voters turned not to be all women, but young women and women of color, in part because young people and people of color in general turned out and voted for the president. (Younger people and people of color are also generally less likely to be married, which partly explains how Obama won single women by 36 points; unmarried women also made up a larger share of voters in the election, 23 percent versus 21 percent in 2008.)

Unfortunately, those are the same demographics who largely stayed home in 2010, when we got many of the looniest members of the Republican caucus. They’re the same ones that brought the debt ceiling debate to the brink, after they held the government hostage over defunding Planned Parenthood. By the way, those positions on women’s health also proved politically toxic last month, at least according to the organization’s own action fund, which just released polling showing that it had managed to make 64 percent of all voters aware that Romney planned to defund it, which 62 percent of them disagreed with. Their research also found that Latinos and African Americans were more likely to side with Obama after hearing his views on “affordable birth control,” abortion, and Planned Parenthood funding. Republicans may have lost their appetites on that kind of fight, except that they still have right-to-life absolutists to appease in their coalition and in their districts.

Soon after the election, Michael Tomasky proposed that some rich liberal donor throw cash at this perennial problem: In off-year elections, “The 20 percent who leave the system are almost entirely Democrats. This has been true all my life. It's basically because old people always vote, and I guess old white people vote more than other old people, and old white people tend to be Republican. So even when white America isn't enraged as it was in 2010, midterms often benefit Republicans.” Meanwhile, according to Politico, it’s looking like the vaunted Obama database is going to be kept in the president’s hands mainly to channel support for legislation, despite the desperate entreaties of Democratic candidates up for election in 2013 and 2014, though it might be also be used for an entirely new organization that could support candidates. (It’s also up for debate whether that database is already obsolete, anyway.)

None of this means that Democrats should be folding to a compromise which well could include draconian cuts to programs like Medicaid and Social Security that are crucial to that coalition. In fact, it probably means the opposite: Those voters need to be reminded why it matters for them to come back to the polls and to stand up for the policies that motivated them on November 6, from social insurance to ensuring access to reproductive health to comprehensive immigration reform, even without Obama’s name on the ballot.