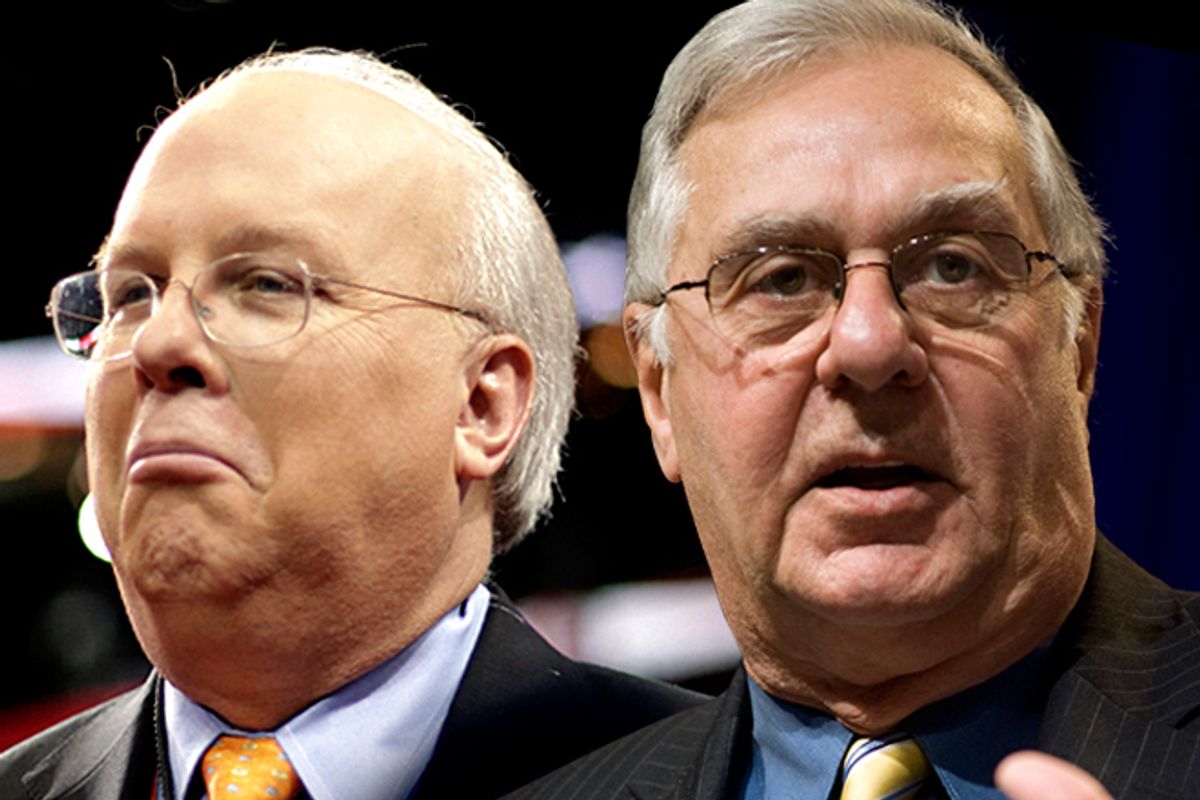 The GOP's November shellacking is rattling the foundations of its powerful media-wingnut welfare-industrial complex. Some big names are either parting ways with former allies, or find themselves under suspicion, with their privileges to roam the right-wing fearscape spewing propaganda suddenly limited.

My old friend Dick Armey, the former Texas congressman who made a fortune astro-turfing the Tea Party, has left the organization he helped found, FreedomWorks. David Corn at Mother Jones broke the news, and Armey depicted the parting of ways as "matters of principle." Then AP revealed that Armey will receive $8 million in consulting fees even though – or because – he left the group, and Politico explained that Armey's alleged last straw came when partner Matt Kibbe signed a book contract that paid him personally for a book largely inspired by (and partly researched by) FreedomWorks and its staff. Sounds like a matter of principle, until you look more closely.

Meanwhile, Karl Rove suffered the shame of being benched by Fox News chief Roger Ailes, who reportedly told his "news" executives that any booker who schedules Rove has to get permission from a higher-up. This comes after Rove's remarkable meltdown on election night, when he tried to get Fox to reverse its decision to correctly call the state of Ohio for Obama. Even more humiliating, Ailes apparently applied the very same edict to always-wrong former Democratic consultant Dick Morris, who admitted after the election that he lied about Romney's chances because he thought it would help Romney. Being equated to Morris is far more degrading to Fox than any leash Ailes might want him to wear, and he must know that.

So are top Republicans actually doing the work they need to do in order to punish the propagandists and grifters who peddled bad politics to the party, and reassured the faithful they were winning when they weren't?

Dick Armey's story is particularly mixed up. Politico's account at first makes Armey seem like a whistle-blower, a man of conscience standing up to Matt Kibbe, who he alleges bilked the group to get a book deal. But if Kibbe is to be believed – and I admit that's a crap shoot -- he only got paid $50,000 personally for a book it's clear other FreedomWorks staff helped with; for objecting to Kibbe's deal, Armey walks away with an $8 million golden parachute. Talk about wingnut welfare. Who's bilking who?

(Armey also demanded that FreedomWorks remove his name, image or signature "from all its letters, print media, postings, web sites, videos, testimonials, endorsements, fund raising materials, and social media, including but not limited to Facebook and Twitter"; and deliver his official congressional portrait to his home in Texas. What a regular guy.)

Rove's situation at Fox is more genuinely humiliating, but chances are it's a showy temporary ritual to protect Roger Ailes. Rove raised at least $300 million in the last election cycle, from which he paid himself handsomely. And he still has enough money around that Crossroads GPS can run ads attacking Obama's tough stance in facing the so-called fiscal cliff, distorting the president's position. The ads close with "Call President Obama and tell him it's time to show us a balanced plan, because every day wasted is another $4 billion we're deeper in debt." Fox's move smacks of a marketing maneuver to cover Ailes' ass than a genuine parting of the ways.

The cracks in the foundation of the GOP's propaganda machine are still good news for the forces of truth and justice. But the shakeups smack of attempts to address symptoms of Republican rot rather than causes. Certainly the rise of Freedom Works represented grifting at its best: Politico revealed that the group doubled its fundraising once the Tea Party appeared, and Armey and pals could co-opt its energy. Armey and Rove have gotten rich pushing policies that have impoverished the country, and their exiles are likely to be temporary transitions, not the humiliation or rebuke they deserve. But I'd be happy to be wrong.