"The Hebrew Hammer": The baddest Jew in the whole damn town!

Ten years after the "Jewsploitation" cult flick first hit the screen, the Hebraic hero returns to take on Hitler 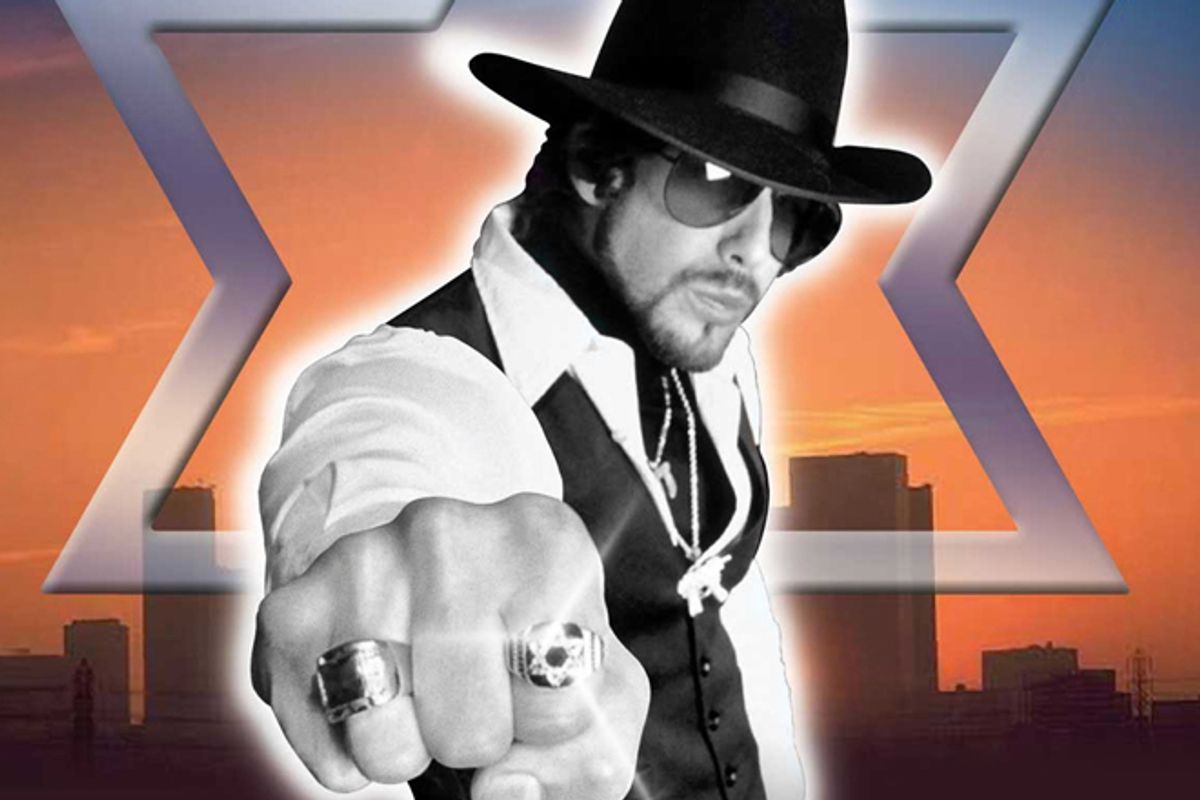 On sad years like this one when Hanukkah falls weeks before Christmas due to the eccentricities of the lunar calendar, we Jews yearn for something — someone — to rescue our overshadowed eight-day festival from oblivion.

We yearn for something powerful and magnificent, someone to remind us that our menorahs are meaningful. That Jews are important. We yearn – dare I say – for  "The Hebrew Hammer.” The “certified circumcised dick,” the “baddest Jew this side of Tel Aviv” (played by Adam Goldberg), who once saved Hanukkah from destruction by Santa’s evil son (Andy Dick). Even though it was made in 2003 and viewed in very limited release (eight theaters and Comedy Central), the film has taken on a cult status in the decade since.

And why not? This silly “Jewsploitation” film – cleverly spoofing stereotypes of Jews and Gentiles the way the “Blacksploitation” films did of blacks and whites in the 1970s – gave us our very own badass. (We hardly count Adam Sandler in “Don’t Mess with the Zohan” because Israelis – especially former Mossad agents – are always tough bastards. American Jews? Not so much.) Yes, we’ve had nebbish, neurotic leading men like Woody Allen, Ben Stiller, Larry David, et al., but they never saved nobody from nothing. And they didn’t have kick-ass slogans such as “Shabbat Shalom, Motherf**kers!”

Now the Hammer is coming back. Not in time to save Hanukkah – well, that holiday was already rescued in the first film (which can be viewed on Netflix instant streaming) – but the entirety of the Jewish people.

Writer/director Jonathan Kesselman has just launched a crowd-sourcing campaign on the new Jewcer.com (like a Jewish Kickstarter except with no all-or-nothing limits) asking for $200,000 of the $1.2 million budget of “The Hebrew Hammer vs. Hitler,” the long-awaited sequel to “The Hebrew Hammer.”

The only question is: What’s taken so long?

“I didn’t have the rights,” says Kesselman. The 38-year-old, who lives in Brooklyn, has seen his share of frustration with Hollywood, including “a lot of false starts” on making the next Hammer installment.  Yet he felt a steady drumbeat of support from fans clamoring for more.

“For the last ten years, on every job I ever got, everything I've ever done, fans are constantly telling me how much they love the movie,” he says. Just two weeks ago, a kid came up to him and wanted to meet him because he said he was “inspired” by Kesselman. “Every Hanukkah and Christmas there are 'Hebrew Hammer' parties where they’re showing the movie, eating latkes and getting drunk.”

Kesselman finally – a bit like his alter-ego – took matters into his own hands. “Why is this not happening?” he asked himself. This fall he finally bought out the rights and decided to make it himself, even though a major studio called to express interest in acquiring it. “There’s a lot of ‘Hebrew Hammer’ fans here in the office,” the exec said, but then he asked, “Is it art-house or is it studio?”

Kesselman balked. “It’s just funny,” he thought. He couldn’t go through the whole song-and-dance spiel again, explaining to all the cooks in the kitchen about the groundswell of support despite dismal box office sales. So, like other musicians who produce albums themselves or comedians who sell tickets directly to their fans, the filmmaker decided to take it directly to the crowd.

“We will take Christian money, we will take Muslim money. Bernie Madoff, you wanna make good with the Jewish people? This is a start, give us money!” Kesselman deadpans in the three-and-a-half-minute fund-raising film, which invites fans to suggest actors – Jack Black? Paul Rudd? – to play Hitler.

In “The Hebrew Hammer vs. Hitler,” it’s a decade later and Mordechai (Goldberg) is no longer the Jewish superman that the kids on the block looked up to when he walked the streets of Brooklyn wearing a long leather coat and a feather-topped fedora over his shaped-with-spittle sidelocks (payis). Now he’s settled down with a job selling trees to Israel for the Jewish Justice League in order to support his expecting wife (still played by Judy Greer). Mordechai’s incensed by it all and by the fact that the kids admire the Semitic Jewish Man – whose name, Hammer chafes, is not even an acronym for anything!

When the plan goes awry to send the Semitic Jewish Man to kill Hitler in a time-traveling Succah (the structure from the Jewish holiday Succoth), it gives Hammer and the “Shaft”-like Mohammed Ali Paula Abdul Rahim (Mario Van Peebles) a chance to travel through Jewish history and meet characters like Abraham and Isaac, Moses and Jesus, Anne Frank and Hitler.

“It’s sort of a combination between ‘Bill and Ted’s Excellent Adventure’ meets ‘History of the World,’ which is my favorite Mel Brooks movie of all time” explains Kesselman, who feels more comfortable with his Jewishness now than he did ten years ago when he first came up with the idea.

“I was going through a lot of rough stuff in my twenties, an identity crisis,” says the L.A. native, who swears allegiance to New York.  Discovering the good in Jewish stereotypes – the sensitive, emotional man – made him want to “own” it. Indeed, the Hebrew Hammer can gain entry to the spy center with an agitated inner monologue or vanquish enemies with an immense guilt trip. Kesselman, too, now a beefy, bespectacled Jew in his late 30s (with an Irish girlfriend), emits that Hammer-like witty self-deprecation and a feeling that the weight of the Jewish people rests upon his shoulders. (Hopefully in the new movie everyone will keep reminding Mordechai of that, sending him into paroxysms of guilt and the whiny retort that he can only do the best he can and to please stop talking about the fate of the Jewish people!)

Even though Kesselman has changed, not everything has changed for the Jews, Kesselman says, recalling location shoots that were canceled in the Bronx because of fear of reprisals. With the recent conflict in Gaza, world pressure is “ramping up” against Israel, just like it had been ten years ago, Kesselman says. “Right now, I’m having a lot of discussions [about Israel and the Middle East] that should be had by smarter, more politically aware people than myself,” Kesselman says.

He’d rather contribute “The Hebrew Hammer vs. Hitler.”

“When everyone gets tense and so sensitive about things, it’s nice to have a movie separating Jews from Israel — ” he starts and stops and tries to figure out how to put it so he won’t offend anyone and everyone, a line that he believes he knows how to tow from making a movie that makes fun of everyone. After a minute he figures out what he wants to say.

“This is American Jewish culture. And it’s pretty f**king cool.”