Will the GOP ever get serious?

The Republicans' big-idea guys and policy wonks outlined their 2016 platforms this week. They sound a lot like 1980 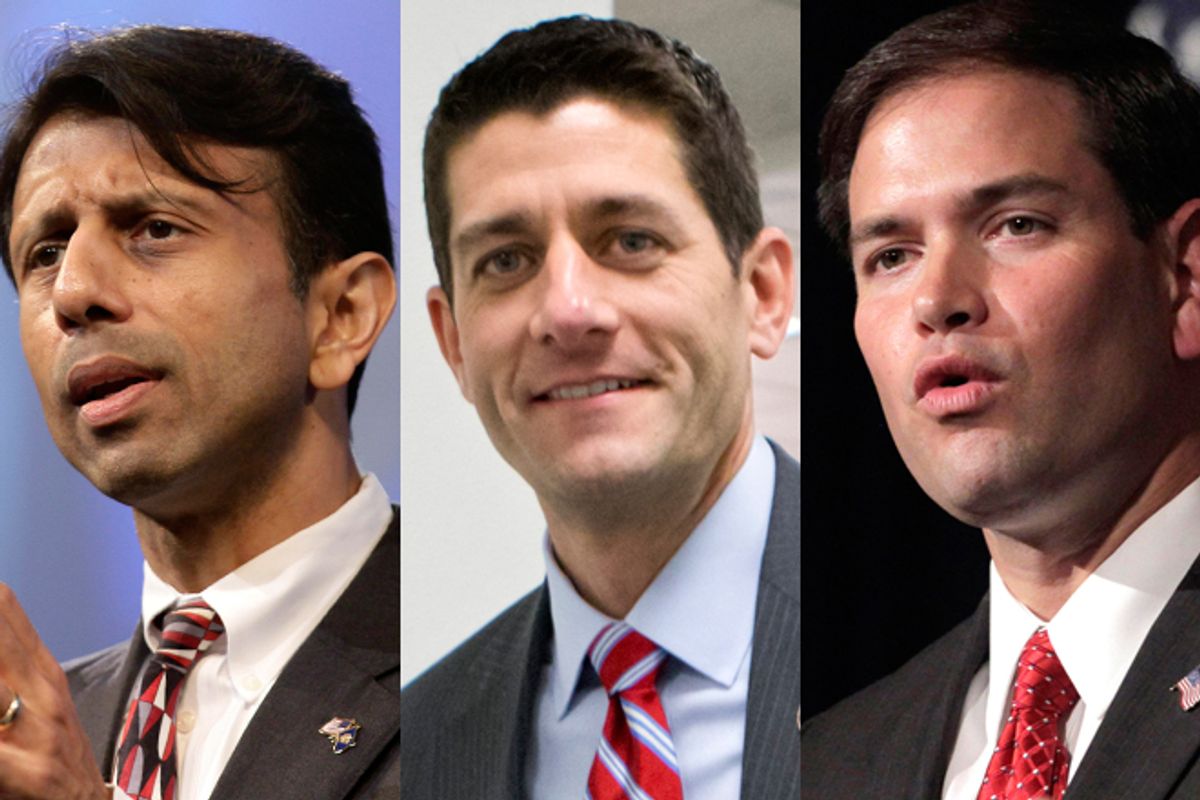 We just managed to get through a campaign in which the Republican candidate’s idea of innovation was to hold a convention themed around an out-of-context quote from his opponent. But we knew Mitt Romney was at his heart a manager, not a policy innovator. So maybe it will be better next time, with new candidates such as Bobby Jindal, Marco Rubio and Paul Ryan. Right?

Yeah, I didn’t think so.

Of course, there’s still plenty of time for innovative conservative ideas. Hey, don’t laugh. Ronald Reagan campaigned on a whole book full of policy options, and as recently as 2000, George W. Bush really did feature new ideas in his campaign.

But neither John McCain nor Mitt Romney had any interest in such things – and judging from the three proto-candidates who rolled out their “ideas” this week, it looks as if Republican politicians these days don’t even remember what actual policy ideas look like.

Start with Jindal. An alleged policy guy, he published an almost embarrassingly empty op-ed this week that had all of two ideas: a Balanced Budget Amendment and term limits. In other words, the same old ideas that Republicans have been trotting out since …well, certainly since the Reagan administration. Okay, granted, Jindal’s version of the BBA is the souped-up one that Republicans have been pushing recently, but that’s even worse than the old-fashioned variety – it seems to track what Bruce Bartlett called “the dopiest Constitutional amendment of all time” when Tea Partying members of the House were pushing it in early 2011.

So not much there.

Marco Rubio? His big rollout speech was given while accepting a Jack Kemp Foundation award. His big idea, as Dave Weigel reported this week, turns out to be the exact same policy ideas that Republicans have been giving for some time now but labeling each one as a benefit for the “middle class.” Which mainly involves reciting the words “middle class.” A lot. A whole lot. As Weigel counted, 35 times.

Not much in the way of new ideas there, either.

Paul Ryan, meanwhile, also spoke at the Kemp shindig, and he continued the theme he evoked late in the campaign. It boils down to rejecting Mitt Romney’s rhetoric of “47 percent” and arguing forcefully that Republican policies are actually just what the poor should have always wanted. But as Jonathan Chait put it, Ryan has “no policy to offer the poor other than the incentive of being hungrier and sicker.”

Now, it’s true that Paul Ryan cannot be fairly accused of simply echoing back the same stale policies Republicans have been running on for three decades. Unfortunately, what he has replaced them with is a shell game; as Paul Krugman has long pointed out, Ryan – the Eddie Haskell of the GOP – is more con man than policy wonk.

Again: there’s nothing about either the Republican Party or conservative movement politics that makes it impossible to develop and run on serious policy proposals. George W. Bush, in addition to his tax cut plan, ran on education reforms and his “faith-based” initiative. Ronald Reagan adopted quite a few policies drafted at the Heritage Foundation. But that was then; now, Heritage is more comfortable with Jim DeMint, a senator who has been extremely effective at influencing the ideological composition of Republican nominees but who is not known at all for policy expertise.

What’s happened? I think a large part of it is that there’s very little incentive from conservative audiences or conservative voters for policy; what gets them excited (and reaching for their wallets, in many cases) is partisan rhetoric, not policy. For the last several years, the way to get a big reaction in conservative circles is to make a teleprompter or a birther joke, not to bring up unsolved problems in the nation. Just as Swift boats and flip-flop jokes were all the rage before that, and Whitewater, Travelgate and the rest of the nonsense they threw at Bill Clinton was popular in the 1990s.

Better that, apparently, than addressing what needs to be done about jobs, health care (we’ve been waiting two years now for a “replace” portion of repeal-and-replace), the climate, income inequality or any of the other things that ordinary Americans identify as things that should be fixed.

In other words, there’s just no sense at all that Republicans have become a party capable of identifying real problems in the nation and finding solutions – conservative, pragmatic or anything at all – to them. They’re just the same old group that is easily mocked for suggesting that tax cuts for the rich will be a cure-all and that has to remind itself not to insult half the electorate. Of course, there’s a long way to go before the 2014 midterms, let alone the 2016 election. But judging from what Jindal, Rubio and Ryan had to say this week, they’re going to need all that time.