Last season, Carrie was certifiably insane. Now, she's just wobbly — and as a result, so is the show 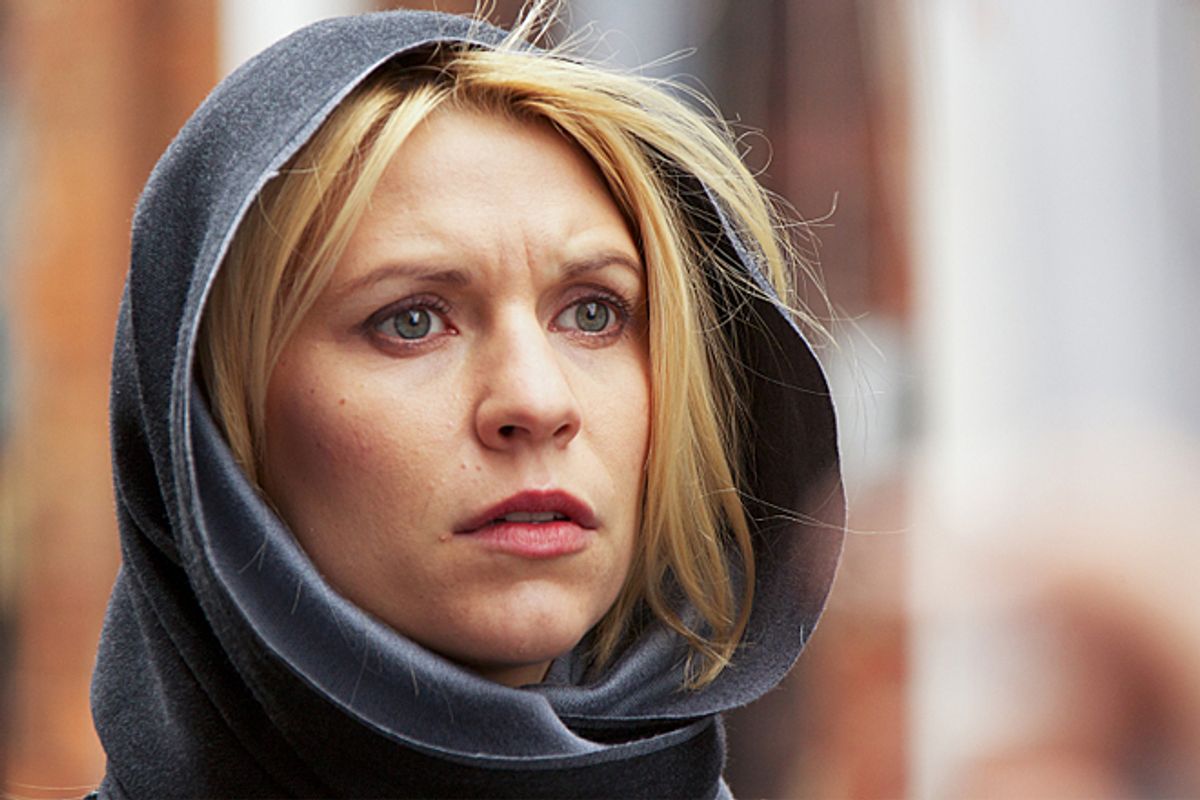 One of the things that "Homeland" fans can count on every week is what I call the "Carrie moment," that moment when CIA operative Carrie Mathison (Claire Danes) defies orders and goes off and does something impetuous and stupid. Last Sunday's messy, wild episode, "Broken Hearts," she goes back to the mill to find terrorist mastermind Abu Nazir (Navid Negahban) when all good sense — and direct orders from her mentor Saul Berenson (Mandy Patinkin) — told her to stay put.

As last night's episode, "In Memoriam," demonstrated, once again, her instinct was right. It always is: This series relies on the Cassandra complex conceit, by which I mean, just because she's wrong in the head doesn't mean she isn't right. [Warning: Spoilers ahead.] She suspected Nazir was still hanging around that mill. Quinn (Rupert Friend) and the rest of the federal search detail didn't know what to believe. Guess what? He was indeed there, but as ever, the challenge for Carrie is getting everyone to believe her. Why? Because the instincts that allow her to see what's really happening also propel her into actions that can exceed her capacity. She's bipolar, impulsive — and not exactly the best guardian of her own mental health care, barely able to keep it together most days.

But for most of the series' second season, keep it together she has. And that's been a problem. Yes, this season has been exciting and pulse-pounding, but the dramatic tension hasn't reached the heights of the first season because the edgy, obsessive, unhinged Carrie has been replaced with a strangely subdued, wobbly one. And, boy do I miss crazy Carrie.

"Homeland" fans remember the "old" crazy Carrie,  the one from the first half of last season who listened to jazz in her sparse condo, going out to bars and using her CIA-trained lying skills to get laid, and washing down meds she obtained under the table from her shrink sister with goblets of white wine.

She was the Carrie who spent the first handful of episodes surveilling rescued POW Nicholas Brody (Damian Lewis) in his home, using cameras she installed off-book because she suspected he was a terrorist, watching his life with rapt attention like it was a reality show on Bravo. The "old" Carrie managed to break every CIA rule in the book by making contact with Brody and then having an affair with him, both to get information out of him and because she fell in love with him. The old Carrie spent the final episodes of season one so over the edge that she was frantically color-coding all of the evidence she was able to procure from Langley and arrange them in a way that only made sense to her (and later, Saul). It was this sense that Carrie's brilliance could turn into emotional and mental mayhem at any time that drove much of last season's action and drama, and it was likely what won the show and Danes their well-deserved Emmys.

Carrie was right about Brody all along, as we learned along with Saul earlier this season, when he found Brody's incriminating video Carrie managed to filch from Hezbolla distract commander Abbas Ali's apartment in Beirut. Until that point, Carrie was still a little edgy, having not quite fully recovered from the electroconvulsive treatment she submitted herself to at the end of the first season. She had problems remembering her cover story and went rogue on Saul almost as soon as she arrived in Lebanon to make contact with a former asset. She was still in a "me against everyone" mode that upped the stakes for the viewer, as she would have an uphill climb to make everyone try to see things her way.

But once she was redeemed, Carrie turned from "crazy lady no one believes" to emulating Jack Bauer, the hero of "Homeland" co-creator Howard Gordon's previous show, "24." They both march to their own beat, operate on instinct no and impulsive, and  launch themselves into dangerous situations with little regard for safety or repercussions.

There remain glimmers of  "Carrie moments," as she's gotten more involved with Brody, as she falls back in love with him while simultaneously trying to lure him over to the "good" side: Her crazy was definitely bubbling up in one of the most riveting scenes of the season, when she interrogates Brody during the "Q&A" episode, when she declared her love for him — a definite no-no in the world of espionage. But where was the raw energy that come with taking such a risk? And last night, too, we caught glimpses of Carrie's illness: her maniacal suspicion that Galvez (Hrach Titizian) was the mole helping out Nazir. Her interrogation of Roya (Zuleikha Robinson) went awry due to a combination of exhaustion and anger toward the terrorist mastermind. And, of course, after Nazir was eliminated, the weight of her decade-long chase hit her and she shed a few tears as she loaded his body into the FBI van. But, even in those moments, Carrie appeared much more composed than she was during most of the first season.

Perhaps the show's writers have decided to move away from Carrie's condition because they wanted to turn the attention to Brody's emotional load, a man who's torn between serving Nazir and his family and native land. No matter the reason, I miss the propulsion that Carrie's unraveling gave to the show. It made a tense action show into an intense character study, which is what usually turns good dramas into all-time great ones, ones that are examined for years afterwards, ones that Alan Sepinwall writes books about.

Right before Nazir T-boned Carrie's car in "Broken Hearts" as a precursor to dragging her to that mill to blackmail Brody, Carrie turned up the radio in her car. What was she listening to? Jazz. It made me start to think the old Carrie was coming back. We have one more episode to find out, and with the possibility of an assassination hanging in the air, we just might get our old Carrie back.