Is "Baby, It's Cold Outside" a date-rape anthem?

The woman in "Baby, It's Cold Outside" says no, then wonders "what's in this drink?" This is a holiday classic? 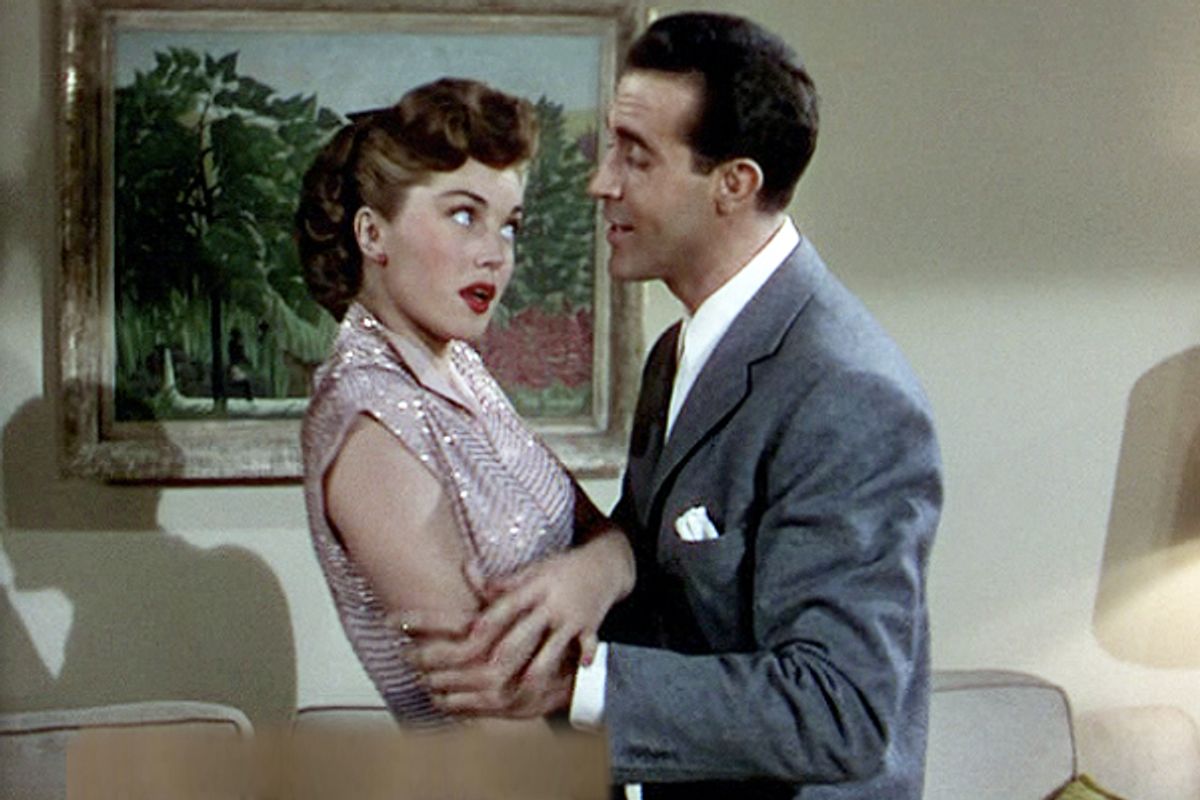 Each year, we’re deluged with the same chipper songs desperately persuading us to embrace the holiday spirit, and each year they seem to hit radio earlier and earlier. We hear “Deck the Halls” while we’re throwing out jack-o'-lanterns. We hear about chestnuts roasting on an open fire while we’re carving the turkey. Pretty soon we’ll be hearing “Baby, It’s Cold Outside” when it’s 80 degrees. That might actually be the only way that particular song could get worse.

Always a popular duet since its creation, “Baby, It’s Cold Outside” has become a fresh chestnut in recent years. It was written in the 1940s by Frank Loesser, who performed it at parties with his wife. He wrote the male part as the “Wolf” and her part as the “Mouse.” Eventually Columbia Pictures bought the song and debuted it in the 1949 Esther Williams vehicle “Neptune’s Daughter,” co-starring Ricardo Montalban and Red Skelton. The film features the song not once but twice, sung by two different couples. “Baby, It’s Cold Outside” won the Oscar that year for best original song, and since then it’s been sung by anyone who knows a few chords on the piano or who knows someone who knows a few chords on the piano.

Especially for a tune so closely associated with the holidays, “Baby, It’s Cold Outside” is icky at best, at worst reprehensible: It describes what may be a date rape. Let’s examine the situation: A woman has stopped by to visit a man, and he connives to keep her from leaving. “My answer is no,” she states, but he pours on the charm: “It’s up to your knees out there.” His seductions become increasingly smarmy (“What’s the sense of hurting my pride?”) and eventually sinister. At one point she exclaims, “Say, what’s in this drink?” Is he being generous with the alcohol, or has he slipped her something stronger? At this point, the Wolf and Mouse designations are redundant. It’s all too clear that he’s a predator and she’s prey.

Think I’m overstating it? I’m not the only one who has pointed this out. And I know the counter-arguments, chief among them: The Mouse sounds like she wants to be convinced to stay. She doesn’t want to leave this man and go out in the cold. She is complicit in her own seduction. That’s not an entirely unpersuasive read, although it doesn’t discount the Wolf’s icky insistence: the way he keeps interrupting her, the way he cajoles and ignores her protestations. He’s a cad, and she’s making a huge mistake. The neighbors will gossip and scandalize her. Her family — each of whom she mentions will be worrying about her in this storm — will be devastated and disappointed. Why would anyone want to listen to a woman make a mess of her life, especially at the holidays? Ultimately there’s something sinister about the song’s playful ambiguity, as we’ll never truly know if she wants to stay or if it’s just the roofie talking.

And yet, the song persists year after year. Nearly 70 years after its debut, there are too many versions out there to count. In 1959, Dean Martin perfected the Wolf’s sloshed delivery as he tried to seduce an entire female choir. Ella Fitzgerald was more cat-like in her interpretation of the Mouse; no wonder Louis Jordan wanted her to stay. This year alone we have at least four versions duking it out like Black Friday shoppers wrestling for the last LOL Elmo. Gavin DeGraw tries to de-pants Colby Caillat, and Cee Lo Green and Christina Aguilera put the X in X-mas, although it has all the erotic heat of a “Voice” judges meeting. The saddest version: John Travolta and Olivia Newton-John trying to ruin your fond memories of “Grease.” The best — or at least the least bad: Rufus Wainwright and Sharon Van Etten sounding too sleepy for any hanky-panky on the new compilation, "Holidays Rule."

Perhaps the pivotal version, however, is the one sung by Will Ferrell and Zooey Deschanel in the movie “Elf.” That version introduced the tune to a new, wider, younger audience and arguably reestablished it as a seasonal chestnut. It’s a weird, awkward choice for the movie, and the song doesn’t seem to fit the characters: Ferrell’s character, a sort of feral manchild on a sugar binge, is much too innocent for the song’s subject matter, and it lends their scene a weird sexual undercurrent that’s completely out of place in the family film. Nevertheless, the soundtrack includes a new version with Deschanel trying to escape the clutches of Leon Redbone, and she even rerecorded it last year with She & Him, her indie folk-pop band with singer-songwriter M. Ward.

So, why this song? Out of the endless supply of Christmas tunes, why does this weirdly scandalous and ultimately queasy-making tale of nefarious seduction not only survive but thrive during the holidays? Perhaps it’s all that interrupting. Most duets, but especially those around the holidays, tend to sound sterile and distant: As the singers trade verses or engage in some easy harmonies, it often sounds like they weren’t even in the same studio together. It’s more about getting two names together than establishing any sort of chemistry. But with its lyrics-as-conversation and the Wolf’s constant interjections, “Baby, It’s Cold Outside” does force some interaction between the vocalists, necessitating some actual chemistry between the couple. They have to interact and engage with one another. You can’t just phone this song in (although many have tried). It offers a weird sense of intimacy, which may be reassuring, even comforting around the holidays but only makes the Wolf’s pursuit of the Mouse that much creepier.

If we have to hear the Mouse make the same mistake every year, even when it’s not all that cold outside, here’s a humble suggestion: Switch the parts. Have the woman play the Wolf and the man play the Mouse. Or have two men or two women sing the song. Play around with the gender roles and sexual orientations. Find new ways to stage this disturbing little playlet. It might not make for the definitive version of the song, but at least it would give a new twist to the drama and might make “Baby, It’s Cold Outside” somewhat bearable again. Probably not.