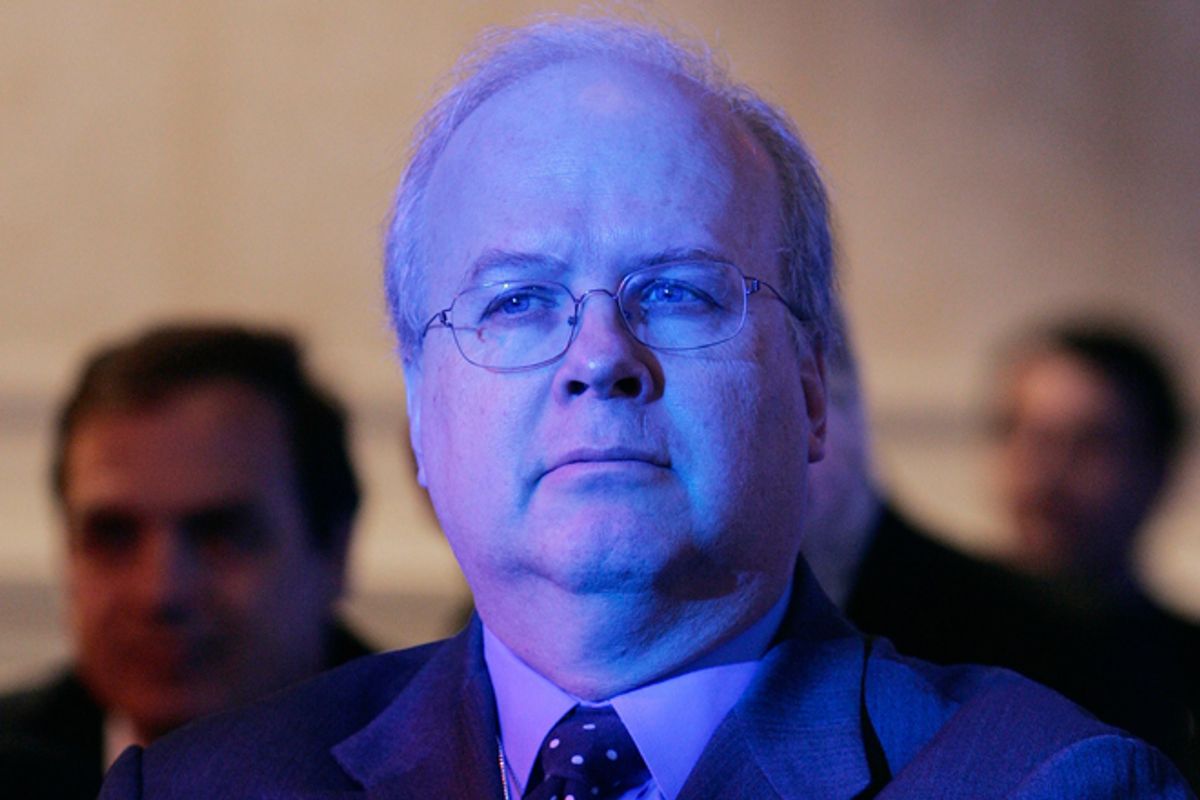 Lee Atwater's claim to fame was his pioneering use of racially divisive imagery in political messages that, superficially, didn't seem to be about race at all. The most infamous examples, of course, were Atwater ads like the "Revolving Door" and the Willie Horton spots. Under the guise of a colorblind message about criminal justice, those spots homed in on African-American criminals in a deliberate effort to stoke racial fears among whites. In employing such a formula, the ads embodied the now-standard dog-whistle tactic for racial messaging -- a tactic that itself was an outgrowth of Atwater's guiding political principle about euphemistic language.

"You start out in 1954 by saying, 'Nigger, nigger, nigger,'" he said. "By 1968 you can’t say 'nigger' -- that hurts you, backfires. So you say stuff like, uh, forced busing, states’ rights, and all that stuff, and you’re getting so abstract. Now, you’re talking about cutting taxes, and all these things you’re talking about are totally economic things and a byproduct of them is, blacks get hurt worse than whites."

Though Atwater made those comments and those ads a generation ago, they are -- sadly -- not outdated tactics merely for debate among historians. They are particularly relevant this week thanks to a new television ad campaign launched by Atwater's friend and protégé Karl Rove.

Constructed by Rove's Crossroads GPS, the spot is airing on cable throughout the nation and focuses on what Atwater would call "totally economy things." View the ad here -- and make sure to closely watch the visual presentation:

As you can see, like Atwater before him, Rove presents the image of an African-American man as an evildoer, referring to him as the tax-raising "he," and pitting him against the "we" in classic demagogic "us versus them" terms.

Now before you explain that away as non-racial partisanship against a Democratic president rather than coded racial messaging, remember one additional point: In the ad, almost all of the "we" who allegedly oppose tax increases just so happen to be white people. That's right, save for possibly one or two factory workers blurred in the background of a single shot (I say "possibly" because their ethnicity isn't clear), all of the "we" who Rove implies are against tax increases -- all who are shown while the voice-over says "we need ideas we can all support" -- are white. (In all, there are 12 people representing the "we" against Obama -- and at most two or three of them are people of color, and that assumes those in question aren't white, which, again, is unclear. Bottom line: The montage of "we" in the ad is obviously designed to be a montage of White America.)

Set aside polls that show raising taxes on the rich is an idea that most Americans do, indeed, support. Rove's omission of that fact, while dishonest, is par for the course in our post-truth politics. Far more newsworthy are the particular visuals he chose to present (and don't think for a second he or his minions didn't deliberately select them -- as anyone who has worked in the realm of political ads knows, picking images is a meticulous process; every image is selected for a reason). And it's not just the scary-black-guy-trying-to-harm-white-people visuals in a vacuum, it's how Rove is presenting those visuals specifically with the tax issue -- that is, the very economic issue that Atwater rightly said is a proxy guaranteed to stir up racial resentment among whites.

Put all of this together, and this ad is more than a short-term message about the so-called fiscal cliff -- it is likely part of a larger effort to resurrect Atwater's politics of bigotry at the very moment when the GOP is debating its future.

As political news, that resurrection is profoundly significant, and not just because Atwater himself issued deathbed apologies for originally spearheading such a politics of hate. No, it is big news because after a 2012 election that saw the Republican Party trounced by the most ethnically diverse coalition in presidential political history, the GOP has been publicly debating a direction forward.

In those deliberations, many Republican leaders have suggested that their party needs to reach out to people of color and discard the racialized us-versus-them rhetoric that is losing them so many elections.

Yet now comes a $500,000 ad buy from Karl Rove taking the opposite position. In insidious televisual terms, the ad continues branding the GOP as a party focused on evoking white resentment against minorities.

It is a clear message from Rove and the conservative faction he represents -- a message indicating that for all the GOP's post-election rhetoric of inclusion, a financially potent force inside the Republican establishment is doubling down on Atwaterism and its attendant dog-whistle bigotry for the foreseeable future.