An anti-union bill is the wrong response to a brain drain, and ensures the state will only create low-paying jobs 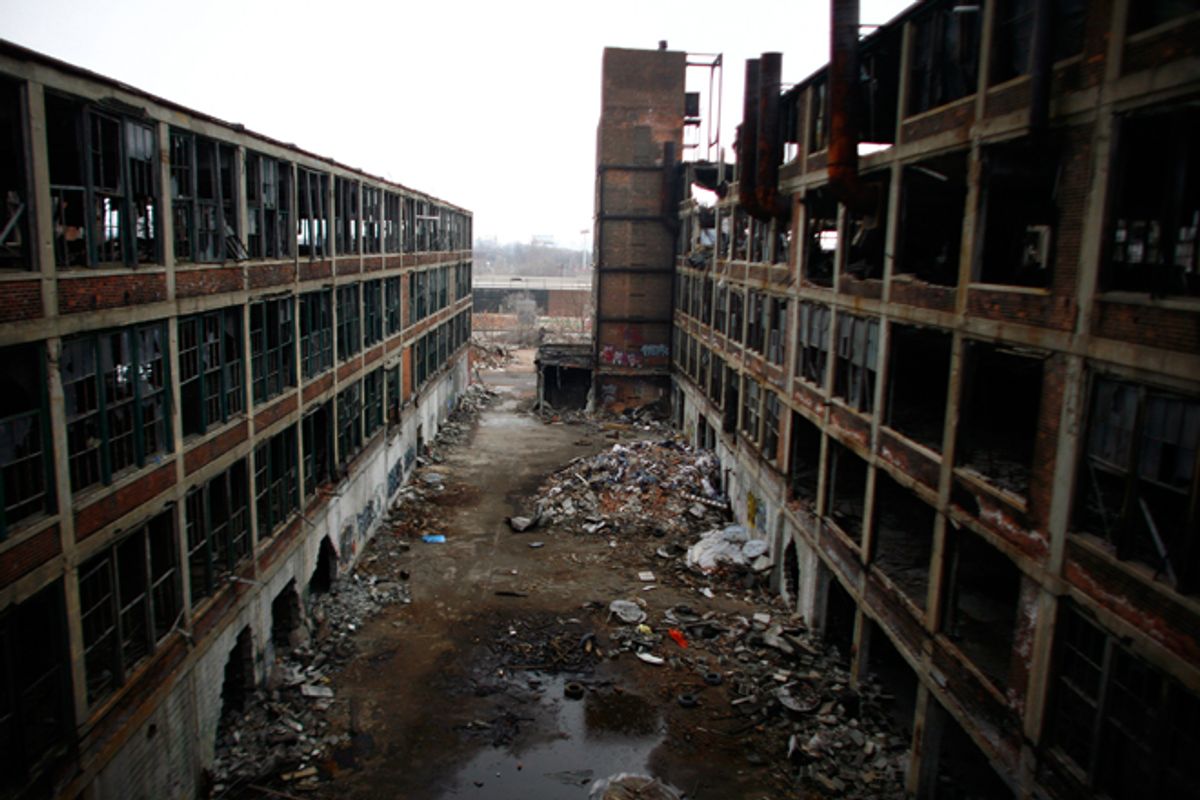 If you want to understand why Michigan is going to pass a right-to-work law this week, go to the Grand River Bar & Grill, a tavern on the north side of Chicago. It’s one of a half-dozen Chicago bars designed to appeal to graduates of Michigan State University. Green and white flags hang on the walls, the MSU fight song blares during Spartan basketball games, and there’s even a euchre league, for fans of the countrified form of bridge played in Michigan college dorms.

Fifty percent of Michigan State students now leave the state immediately after graduation. That ratio doubled in the 2000s, which is known in Michigan as “The Lost Decade.” In those 10 years, Michigan dropped from 30th to 35th in the percentage of college graduates, and from 18th to 37th in per capita income. (Michigan was also the only state to lose population in the last census.) The university system’s main function is giving Michigan’s brightest students a credential to get the hell off that jobless peninsula.

Their No. 1 destination is Chicago, the drain where most of the brains in the Midwest end up. (Every Big Ten school is represented by at least one bar there.)

Joe Lambert, who graduated from MSU in 2004, tried to stay in Michigan, but the only job he could find was at Enterprise Rent-a-Car. A faculty adviser told him about an opening at a consulting firm in Chicago. He rode Amtrak’s Blue Water line for the interview, and got a phone call the next day.

Today, Lambert is working at an accounting firm, and married to a woman from Boston. There’s a rule of thumb in the Rust Belt states: Once kids are gone for five years, they’re gone forever.

“Honestly, I love Chicago,” he said. “There’s nowhere else I’d rather live. It’s one of those things that the more time I spend here, the more I love about it. For everything that Michigan has going for it, they’ve squandered a lot of their resources. When the auto industry moved out, they had nothing to fall back on. I get calls from alumni, saying, ‘I’m thinking about moving to Chicago.’ I say, ‘By all means, come here. It’s been great to me.’”

What does this have to do with the right-to-work law? Michigan has lost so many educated workers that the state’s leadership seems to feel it has no choice but to become a low-wage haven. The kind of place that attracts chicken processors, not software engineers. (There is a Google office in Ann Arbor. It was set up there by Google founder and University of Michigan graduate Larry Page, as a sop to the state he abandoned for Silicon Valley, which is to the 21st century economy what Detroit was to the 20th.) Unable to adjust to the 21st century, Michigan is going back to the 19th.

Gov. Rick Snyder, who came into office as an opponent of changing the state’s labor laws, changed his mind after Indiana -- another state suffering from an out-migration of college degrees -- became the first right-to-work state in the Rust Belt earlier this year. That put pressure on Michigan to compete with its neighbor for unskilled jobs.

Twenty years ago, I made the same journey as Joe Lambert: I was a Michigan State grad who couldn’t find a full-time job in my hometown of Lansing. All my friends were moving to Chicago, so I loaded everything I owned into the back of my Ford F150 pickup truck and made the four-hour drive. Most of us are still here. Six years ago, I tried to move home, but my only job offer paid $25,000 a year -- with no vacation. Economic emigration is such a rite of passage for young Michiganders that a college humor magazine dubbed Michigan “The Get Packin’ State,” and I once heard a bookstore clerk in Lansing sigh, “We’re all going to end up in Chicago.”

It’s another consequence of globalization, the same force that contributed to the decimation of the American auto industry, and along with it, the decimation of the union movement: Just as money and education have become concentrated among fewer people, they’ve become concentrated among fewer cities, too. Chicago is one of the winners. Detroit, Flint, Lansing and Saginaw are among the losers. Michigan leads the nation in urban poverty, violence and decrepitude. Detroit is such an international symbol of post-industrial decay that artists fly all the way from Europe just to photograph its ruins.

Former Chicago Tribune reporter Richard C. Longworth, author of "Caught in the Middle: America’s Heartland in the Age of Globalism," often speaks to civic clubs in such towns as Davenport, Peoria, Terre Haute and Grand Rapids. When he asks, “What can Chicago do for you?” the small-town burghers always have the same response: “Give us back our children.”

They’re not coming back, and neither are Michigan’s days as a land of economic opportunity. It’s been pointed out that Michigan is birthplace of the modern union movement, which began during the Flint Sit-Down Strike of 1936-37. But Michigan was also, for two generations in the middle of the 20th century, the destination for Southern sharecroppers looking to escape their penurious peasantry. The Hillbilly Highway ran from Alabama, Tennessee and Arkansas -- three right-to-work states -- to Flint and Detroit. At its end were decent wages and middle-class dignity, guaranteed by the United Auto Workers.

Now, Michigan has decided to become the kind of state that Michiganders’ grandparents escaped. When it does, even more of their grandchildren will make the trek along their own Wolverine Highway, to Chicago, to New York or to Silicon Valley.