The price of airline iPad freedom

Another defeat for privacy: We will soon be able to use our mobile devices during takeoff and landing 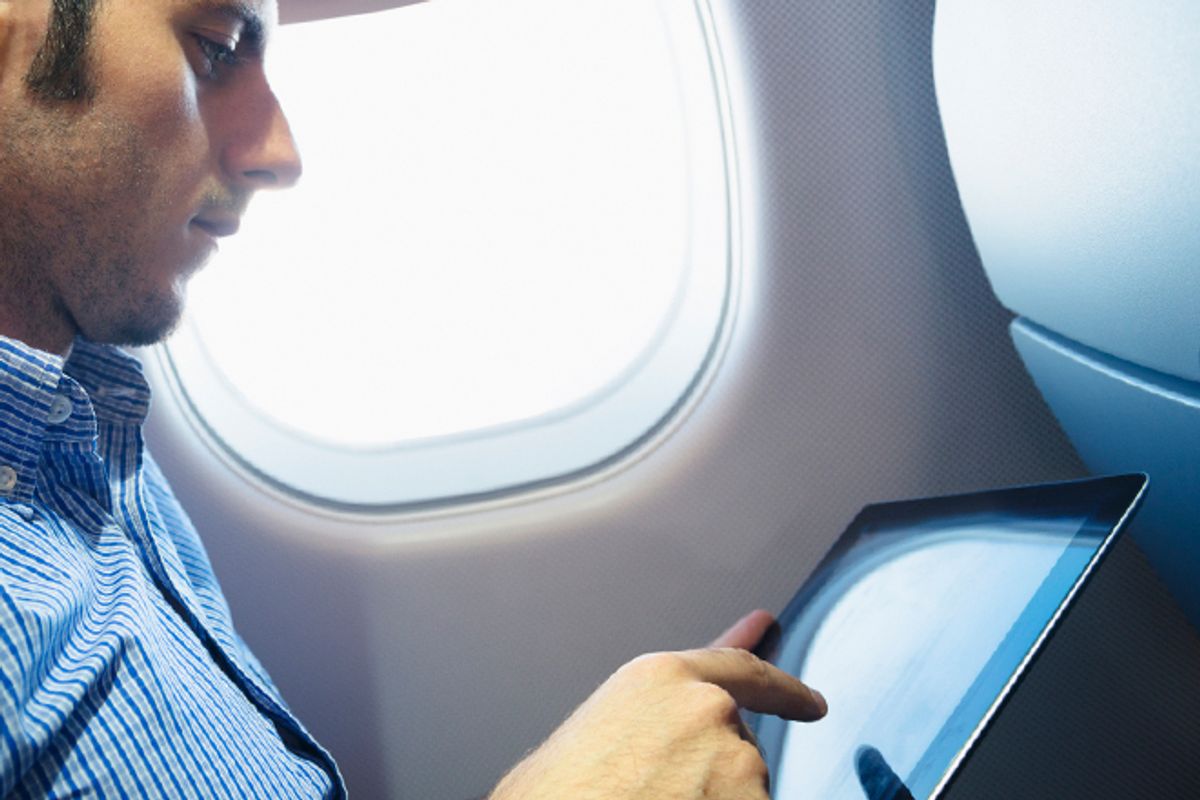 Look, I get it. I understand why the twittering masses are so excited to learn that FCC Chairman Julius Genachowski sent a letter last week to the FAA encouraging the agency to get its act together and allow airline passengers to play with their mobile devices during takeoff and landing. I have long wondered, along with everyone else, why we haven't seen any meaningful scientific evidence that the use of such devices interferes with the operation of an aircraft. Miles away from the airport, I still feel the pain for those parents of toddlers (and everyone sitting within earshot) who are denied the right to distract their spawn with the fabulous interactivity of the latest iPad. And I always die a little death every single time I have to stop checking for the latest Facebook status updates just so my Boeing 727 can get launched off the ground. Let Alec Baldwin play as much "Words With Friends" as he wants! We're talking about freedom here!

You don't need to take a poll to see which way the wind is blowing. Just watch the passengers on any plane, moments after the wheels touch down on the destination runway. Before the flight attendant even has a chance to make the announcement permitting cellphone access, everyone is already reaching for their device. We've been disconnected for priceless seconds of our lives -- seconds we will never get back. The panic is palpable: We might have missed a text! Heck, even George Takei is so annoyed that he started a Change.org petition to get the FAA to liberate us all from our shackles. And who doesn't love and respect George Takei?

But. Buried in the quote from Genachowski's letter to the FAA is a rationalization for the proposed FAA change that gave me pause.

"This review comes at a time of tremendous innovation, as mobile devices are increasingly interwoven in our daily lives," Genachowski writes. "They empower people to stay informed and connected with friends and family, and they enable both large and small businesses to be more productive and efficient, helping drive economic growth and boost U.S. competitiveness."

Just how much interweaving do we need before we're trapped in a web?

Over the weekend, the Wall Street Journal published a new installment, "They Know What You're Shopping For," in its excellent series of online privacy. The gist: companies that specialize in online tracking are getting better and better at associating our real names with our journeys across the Web.

The widening ability to associate people's real-life identities with their browsing habits marks a privacy milestone, further blurring the already unclear border between our public and private lives. In pursuit of ever more precise and valuable information about potential customers, tracking companies are redefining what it means to be anonymous.

The Journal reports on multiple techniques that companies are using to figure out who we are and what we are doing, all for the ultimate purpose of being better able to manipulate us into buying a product. The details aren't particularly important for our purposes here: The point is that the trackers are getting more proficient. Through the proliferation of "Like" buttons and "Tweet this" features across the Web, Facebook and Twitter alone are privy to huge amounts of information about our online habits, whether or not we ever click on their buttons. Enter your email address to register for some service or product on a Web page, and you have no idea how many of the other parties serving ads on that page are also listening in. The bottom line is that the more we time spend online, and the more, particularly, that mobile devices are increasingly interwoven into our lives, the more marketers and advertisers and social media networks will know about us. They know what we read, what we watch, what we listen to -- and what we want to buy. When you grab an extra 15 minutes of iPad time while waiting to take off, you're just giving them another 15 minutes to center you in their sights.

Why are we so desperate to embrace this reality? Julian Sanchez, writing in Time, describes the moment when "off go the smartphones, tablets, portable music players and handheld game devices, out come the magazines, newspapers and nap-time pillows ... " as "like watching the future happen in reverse."

Call me an atavist, but when I sit there with my printed newspaper, or magazine, or paperback book, only the nosy passenger crowding the armrest next to me knows what I'm devouring. There's a certain satisfaction to that, a comfort in knowing that my decision to read an article in the New York Times about male infertility won't result in snake-oil advertisements touting quack nostrums pushed to my smartphone.

A few weeks ago, I was on a shuttle to the Oakland Airport. At one point, I interrupted my scan of Twitter to look around me on the bus. Every single one of my fellow passengers was staring into their phone. Every one! I understand the attraction, believe me, because I was right there along with them. And it's always fascinating to watch the future unfold. There was a strange beauty to the sight of so many heads bowed in iPhone/Samsung/HTC/BlackBerry worship.

But the future has a price. Our privacy. Our ability to remain unknown to those who wish to monetize us. That's the quid pro quo. That's what we're giving up when we clamor for 24/7 access to our iPads, whether on the ground, aloft or in transition from one state to another. We might want to cherish those rare moments when we get to see the future go in reverse. Because everywhere else, it's on fast-forward.

UPDATE: Numerous sharp-eyed readers have informed me that no U.S. airline has operate a 727 in at least ten years. I must have meant 737. Or 747.