Lebowski's funnier the second time around 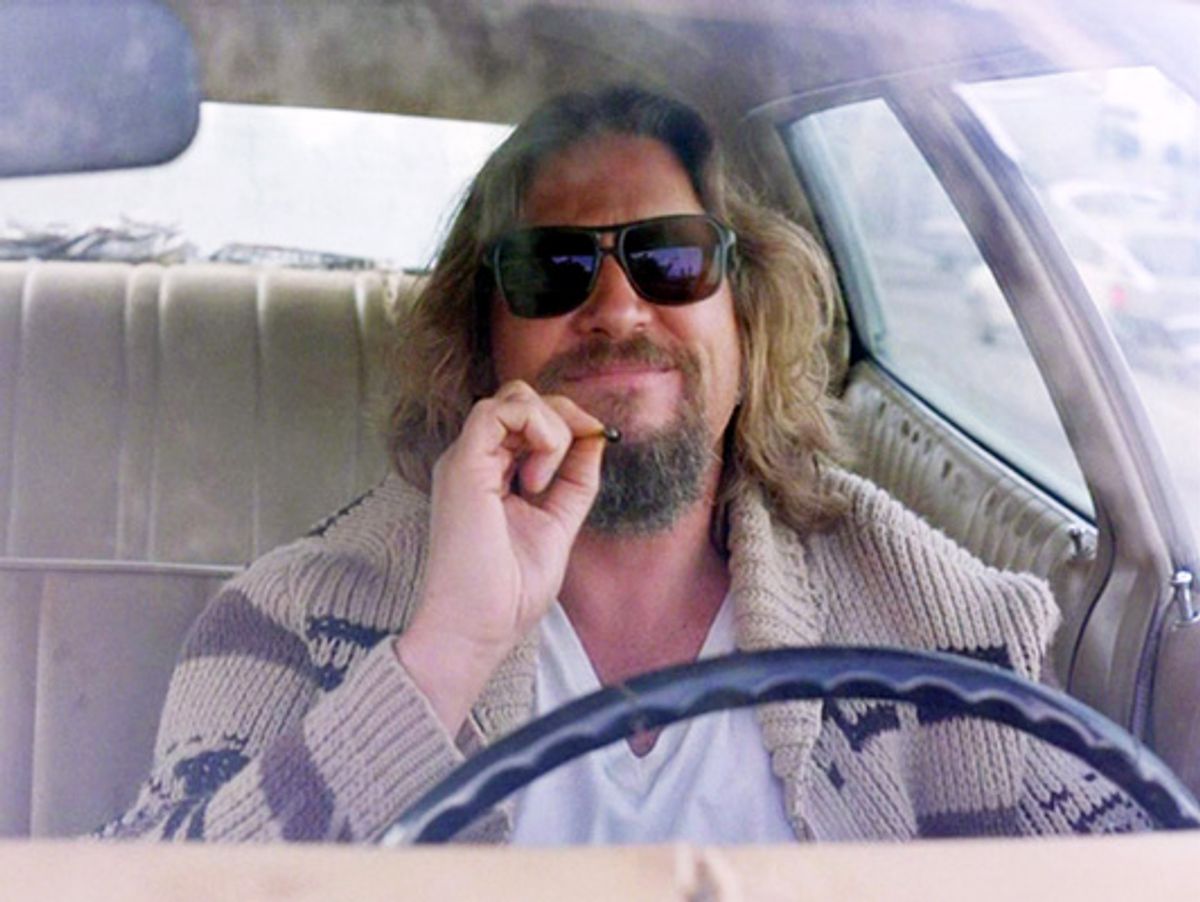 Scene still from "The Big Lebowski."
--

A FEW WEEKS after 9/11, while getting off the subway at Broadway Station in Astoria, I was suddenly overcome by an urge to watch The Big Lebowski. I’d seen it in the theater when it came out in 1998, found it okay but nothing special, and had not thought of it until I stepped off the platform that afternoon. And yet the urge to see the film was as powerful as it was sudden.

I stopped Blockbuster, and found, to my surprise, a DVD of the movie on sale for $12.99. I bought it, went home, and watched it. Then I watched it again. It was much, much better than I’d remembered. In fact, the more I watched it, the better it seemed to get. I was not alone in this assessment. Since I bought the DVD in 2001, The Big Lebowski has become something of a cult classic. Each year, there is something called Lebowski Fest, where fans of the film gather to pay homage to Walter and Maude and The Dude. It is, obviously, one of those movies that demands, and rewards, multiple viewings.

This is very difficult to accomplish, especially with comedies. I saw There’s Something About Mary in the theater, with a group of friends, and howled the whole way through. But when I watched it a second time, I didn’t laugh once. Most comedies are like that: unsubtle, over the top, designed to make you (or, more likely, your ten-year-old) crack up the first time, to ensure you tell your friends how funny the film is—never mind that they aren’t remotely funny the second time, to say nothing of the third or fourth. In short, there’s only so many times one can find injury to Ben Stiller’s genitals amusing.

Watching the same movie or TV show over and over again, memorizing the lines, the gestures, the inflections, is something I did a lot of in college. I’ve seen Animal House more than 100 times. (“I’m in love with an idiot.” “Is he bigger than me?”) I can still quote liberally from episodes of The Simpsons I haven’t watched in a decade. (“I don’t know how it could have happened. It started out like ‘Romeo and Juliet’ but it ended in tragedy.”) I could probably write the entire screenplay of Heathers from memory. (“Just give me the cup, jerk.”) And so on. But what makes certain films and certain shows—and, for that matter, certain songs and certain books—more re-watchable, re-listenable, and re-readable?

One element is attention to detail. The comedies with staying power operate at multiple levels. When you watch again, you notice things you might have missed the first time. A great example of this is Groundhog Day, a movie that, ironically, gets better each time you see it; the subtlety of Bill Murray’s performance cannot be appreciated in a single viewing. I must have watched Shrek 15 times (with my kids, of course) before I realized that the name Lord Farquaad was “Lord Fuckwad” pronounced with a Scottish accent. Fuckwad! In a kids’ movie! I mean, that’s brilliant.

Confidence is another attribute all re-watchable films possess. A lousy flick like Meet the Fockers is desperate for you to laugh, not unlike the guy at the party who is desperate for you to like him, and this obvious desperation kills the comedy. The gentlemen in Monty Python, by contrast, act like they couldn’t give a tin of Spam if you so much as smile—and this makes what they do funnier. Humor is like sleep; it only happens when you’re not thinking about it.

The Coen Brothers have this down. They are so unconcerned with making you laugh—and thus so sure that they can achieve that effect—that they disguise their comedies as other genres: detective movies (The Big Lebowski), spy pictures (Burn After Reading), thrillers (Raising Arizona). When I first watched Burn After Reading, I had the same reaction I had after seeing The Big Lebowski: decent, I thought, but nothing special. I was so busy processing the twisted plot that I didn’t realize how funny it was—that the plot was itself part of the gag. Then I caught the end of it on HBO a few months later—the final scene, when J.T. Simmons’ CIA undersecretary and his minion are dissecting, essentially, the plot of the movie, which is beyond ridiculous. Simmons has one line—“Pay it,” he commands, exasperated—that is just pitch perfect, and made me crack up alone in my basement. So I watched the movie again. And again. And again. And it gets funnier every time. George Clooney, Brad Pitt, Frances McDormand, John Malkovitch, Tilda Swinton—all of them brilliantly funny. “Pay it” has become a go-to line in our house, like those Simpsons quotes were in college. I think Burn After Reading is funnier—and certainly a more even film—than Lebowski.

As for the zombie box, the funniest re-watchable TV show out there—one that I would, if I were still in college, absolutely be recording and watching over again, like I once did with Homer, Bart and co.—is called Adventure Time. Adventure Time is set in the future, after the Mushroom Wars destroy much of our civilization, and its cast of characters includes: Finn, an 11-year-old boy and the last surviving human; Jake, his best friend, a shapeshifting dog; Princess Bubblegum, ruler of the Candy Kingdom, who is actually made out of bubblegum; the villainous Ice King, who has stinky feet and a habit of kidnapping princesses; and a 1000-year-old Goth bass-playing vampire named Marceline. It’s sort of a combination of fantasy and science fiction, a perfect introduction to the conventions of those genres, trippy and weird and at times scary but heartfelt, with a terrific soundtrack, genius dialogue, clever plot twists, and a heart of gold—with a healthy dose of hipster thrown in for good measure. It’s on the Cartoon Network, and its target audience is ostensibly boys of Finn’s age. My house consists of two fortysomething grown-ups, a seven-year-old boy, and a six-year-old girl—none of us the desired demographic—and yet we all love that show. There was an episode the network was heavily promoting, when Finn the Human and Jake the Dog somehow became Fiona the Girl Human and Cake the Cat. All four of us were legitimately excited for the ep to air (When does that ever happen? As Seinfeld once remarked, there’s no such thing as fun for the whole family). And it was totally as smart and funny as advertised. Adventure Time is a show that people will keep watching, even when they’re done writing new episodes. It’s just one of those shows.

Judging by its prominence in Cartoon Network ads and the sudden emergence of merchandise at Toys R Us, Adventure Time is doing well—probably better than the producers even expected. This is a good sign. In the world of film, the ultimate indicator of success is box office receipts. This is why Adam Sandler keeps making movies like Jack & Jill—he knows he can expect one killer weekend before word gets out that the film isn’t funny. Whereas if he tried to make a more subtle, smart comedy, he might not find the same broad (read: lowest-common-denominator) audience. Look at the Mike Judge film Idiocracy, that was in about five theaters for about five minutes, despite being vastly smarter and funnier than anything Sandler has ever done. Sandler—and to a lesser extent Stiller—is choosing to maintain his brand, rather than actually produce a genuinely funny product. Which, given his ability, is a shame.

As a fan of comedy, I wish talents like Sandler and Stiller would stop listening to their accountants and just make funny movies—and I’m grateful that the Coen Brothers, like The Dude, abide.

BONUS: Lines from movies and TV shows I know by heart. How many can you identify?

They seem to have an open-door policy for assholes, though, don’t they?

—Relax. I’m pre-law.
—I thought you were pre-med.
—What’s the difference?

You see this watch? This watch cost more than your car. That’s who I am—and you’re nothing.

—Do you play darts?
—Not professionally. Just, you know, in bars.

That’s easy for you to say. You’re Mr. White. You have a cool-sounding name.

—I came to Casablanca for my health, for the cleansing waters.
—Waters? What waters? This is a desert!
—I was misinformed.

I watched Matlock in a bar last night. The sound was off, but I think I got the gyst.

Individually I love you all with affection unspeakable. But collectively, I look upon you with a disgust that amounts to absolute detestation.

That’s the thing about high school girls. I get older…and they stay the same age.

—There was a choice…meat or fish.
—I remember. I had lasagna.

—Hey, nice beaver.
—Thanks. I just had it stuffed.

I was just about to say…”Eight o’clock?”.

Leave her alone, you pompous celibate.

It was just lying there. On the floor.

—Does it hurt?
—Only when I breathe.