"Amish Mafia": Is there really such a thing as an Amish thug? 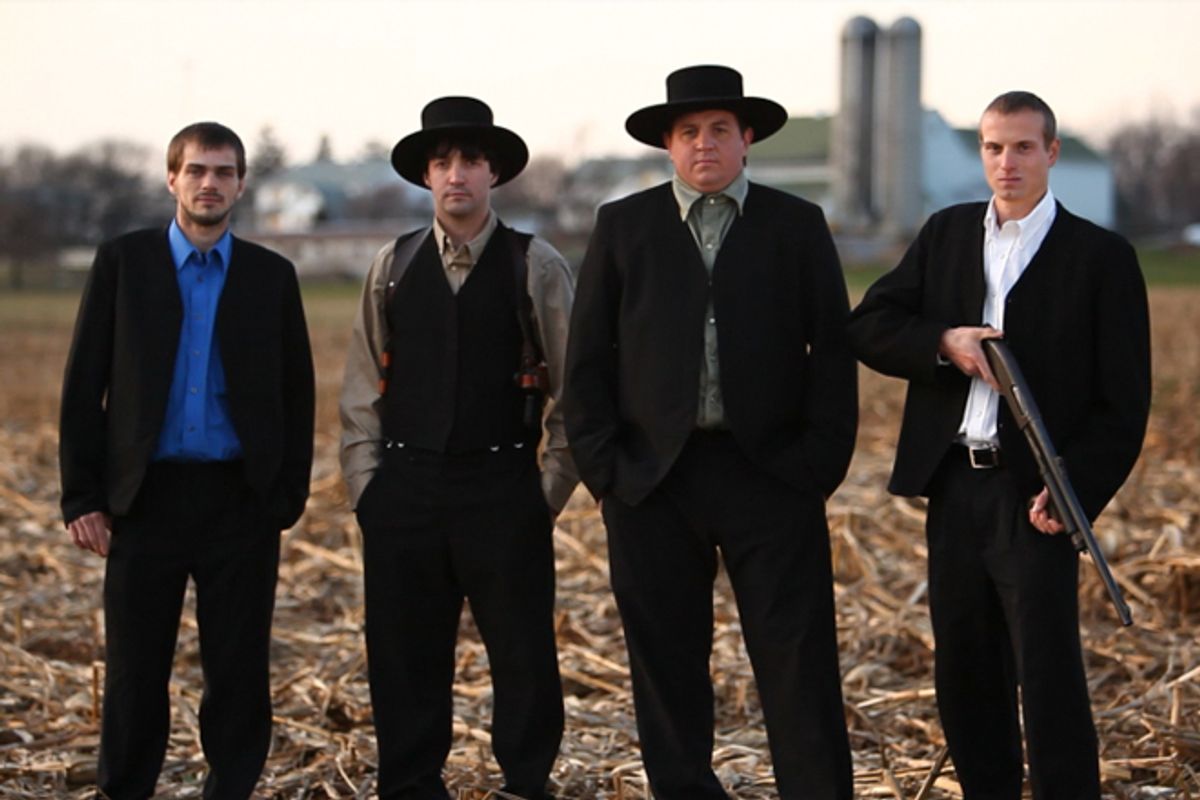 Tonight, the Discovery Channel will roll out "Amish Mafia," a new series that follows on the heels of the commercially successful – yet no less offensive – "Breaking Amish" on sister channel TLC. If you want to gauge just how offensive these shows are, substitute the name of any other religion or identity group into their titles. And that's not even getting into the content of these programs.

"Amish Mafia," according to Discovery, is supposedly going to show how in Lancaster County, Penn., it’s the Amish mob who “maintain peace and order.” I’m a native of Lancaster County and have an extended family full of Amish people. If the Amish mafia were as vital to peace in the county as Discovery suggests, someone like me – especially with my youthful strays off the straight-and-narrow – would at least have heard of these gangsters, if not have had a few run-ins with them.

However, much as with "Breaking Amish" and other “Amishploitation” productions, the characters in "Amish Mafia" are misrepresented as having been plucked from the core of the Amish community when, in fact, the individuals involved are either on the outer periphery of Amish life, outright fabrications, or are vulnerable or classless enough to make for the kind of personalities TV audiences could find compelling regardless of religious or ethnic affiliations (the business of tabloid and reality television is premised on an ample supply of such people). In the case of "Amish Mafia," thuggery and self-promotion certainly appear to be higher priorities of the featured “bosses” than the tenets of Amish religion.

Is there any population in which you can’t find a few badly behaving, exploitable or shamelessly colorful individuals on which to base a trashy television show? Obviously you can find such people in any community. But there are few communities for which it’s considered OK to take the unflattering exploits of such persons and make them the subject of a reality TV series while slapping the name of a religion or ethnicity on the project. How well do you think "Mormon Mafia" or "Latino Mafia" would go down? "Breaking Muslim"?

At least as far back as Lucy Walker's 2002 documentary "Devil's Playground," a sub-industry has found success in a formula that’s one part Rumspringa, one part Jerry Springer. And its approach is entering the mainstream. It’s not just producers of lowbrow TV series, but respected news outlets who increasingly treat the Amish with an alarming disrespect bordering on bigotry – often clearly in violation of their own journalistic guidelines. If you need evidence, just do an Internet news search for “Amish.”

When a young Amish man in Ohio sent X-rated texts to a minor last year, many mainstream news organizations covered it as an above-the-fold story – apparently for no other reason than it was just too hilarious to pass up. In another story that ultimately saw a hate-crimes verdict handed down last September, concerning an Amish-related cult whose attacks involving beard- and hair-shearing terrified Amish communities in two states, even respected news operations initially covered the story as if it was merely the antics of a few feuding hillbillies. And the countless headlines last summer about the “Amish Bernie Madoff” (investment fraudster Monroe Beachy) stood in sharp contrast to standard media treatment of other swindlers’ religions and ethnicities.

The Amish don’t have a public relations arm or an organization to defend their reputation and monitor bigotry and insensitivity toward them. There’s no Amish NAACP or Anti-Defamation League.

Yet more troubling than the disrespect to which the Amish are increasingly subjected in our public discourse is what it reveals about the rest of us. A society that allows derogatory treatment of a religious or ethnic group in its midst – and not just allows it, but eats it up – isn’t nearly as tolerant and inclusive as it thinks it is.

The shortfalls of this system in lieu of an authentic culture of respect were apparent in the insensitive, borderline-racist episodes from the height of “Linsanity” when Jeremy Lin became the first NBA player with a Far Eastern ethnic background to experience superstardom. In his case, others – mostly Americans who shared his background – spoke up and the outrages quickly stopped. The Asian American Journalists Association went so far as to publish guidelines about how to talk about Asian people – which unfortunately, but probably necessarily, included Asian-specific notes on discussing racial physical features and using slang references to national origin.

Due to their unique culture and relationship with the rest of the world, the Amish themselves (not even the Amish mafia) will not champion the cause of protecting the honor of their faith and community.

Mennonites – the modern, non-plain variety (my church) – whose institutions often show brave leadership in working for justice and dignity for maligned and oppressed groups around the globe and whose religious, historic and familial ties make them well placed to detect and informatively counter disrespect toward the Amish, largely choose to stay silent. It is truly an opportunity lost.

As was the case with Jeremy Lin, most of the insensitivity toward the Amish isn’t driven by hate or political agenda. But it’s not hard to see where the openings exist in the public discourse for those whose speech and insinuations about minority groups are truly driven by hate and divisive political motivations.

Even when insensitivity isn’t intentionally malicious, it can still have distorting effects. Much of the reporting of stories like the Amish beard attacks and the “Amish Bernie Madoff” is so off the mark that the experiences of traumatized families, or in the case of the “Amish sexter,” the victimization of a 12-year-old girl, get pushed to the background if not lost completely.

While the Amish are a media-vulnerable group, their lifestyle and values make them better placed than most minority groups to weather mistreatment of their religion and culture; they’ll be OK.

It’s really about the rest of us. What do we allow ourselves to say and be entertained by when it comes to others who are not like us or whom we don’t understand? Are we progressing toward a universal standard worthy of the pluralistic society we aspire to, or are we stuck with a piecemeal set of rules determined by the balance between the motivation of others to mistreat a minority group and the group’s motivation and ability to fight back?