When noir blew up!

Along with Hammett and Chandler, James M. Cain did for film and literature what punk did for rock and roll 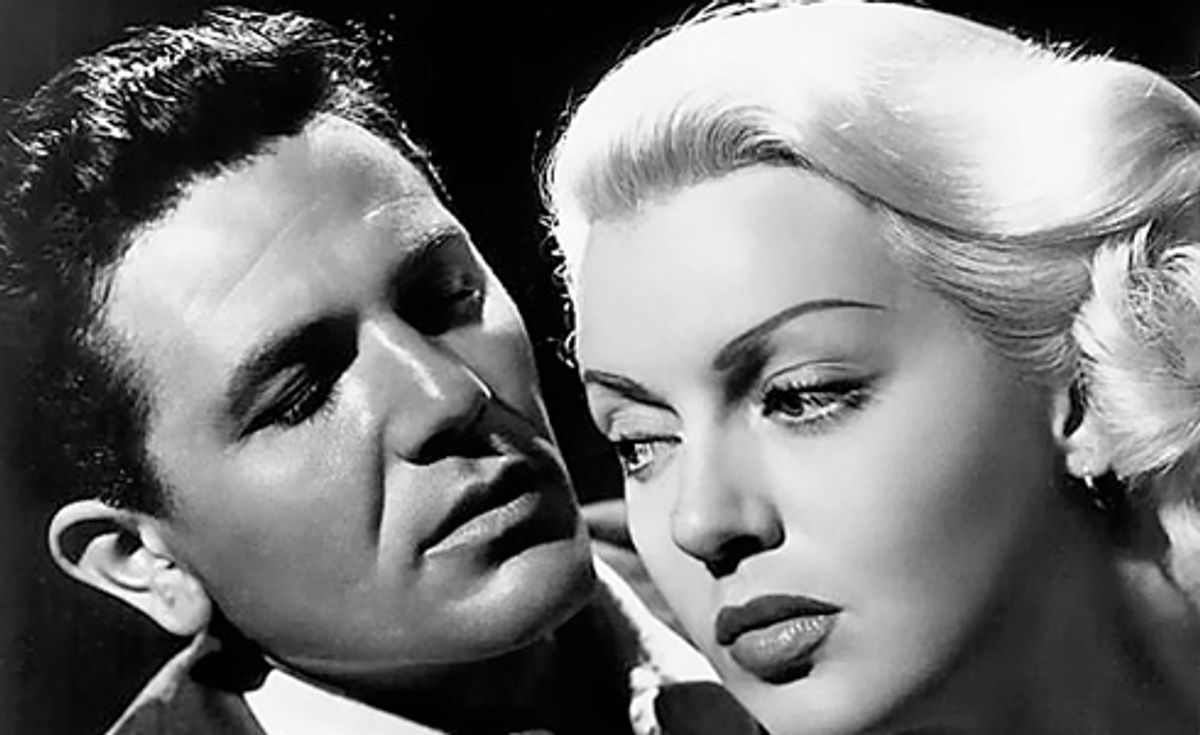 WITH ITS ARTLESSLY PERFECT FIRST SENTENCE — "They threw me off the hay truck about noon" — James M. Cain’s The Postman Always Rings Twice drew a line in the sand as defiant as any in literature since The Adventures of Huckleberry Finn. Not unlike that novel, Postman forced an untamed populist voice onto more exalted cultural sensibilities; of course, nothing could be more American. Cain is a major figure of American fiction’s shadow pantheon, the one that includes not Fitzgerald, Hemingway, and Steinbeck but Paul Bowles, William Burroughs, and Philip K. Dick, with Faulkner, Miller, and Pynchon wandering the demilitarized zone between. The most commercially successful of them, Cain was also the most spiritually bleak, finding his calling late and fast in the Depression’s depths after a fitful career as a journalist. The Postman Always Rings Twice (1934) was a sensation and scandal, at the other end of the bookshelf from The Grapes of Wrath (1939): Tom Joad may have been riding that hay truck too, but Frank Chambers is the one who got thrown off.

Frank meets Cora working at a roadside gas station and eatery. "Her lips stuck out in a way that made me want to mash them in for her" is his lively first impression. Let’s not be so superior as to assume that what Frank and Cora feel isn’t love. It’s the only love that makes sense to them, so incendiary — Cain’s working title for Postman was Bar-B-Que — that once it exhausts the language of copulation, all that’s left is the language of murder. Once Frank and Cora dispense with her immigrant husband, all that’s left is to dispense with each other in an erotic rage. "Rip me!" Cora cries to Frank, feet from the corpse, after Frank begins "to fool with her blouse, to bust the buttons […] I ripped her. I shoved my hand in her blouse and jerked. She was wide open, from her throat to her belly." Even Cain’s fellow renegades were shocked. Raymond Chandler, another ne’er-do-well with a suicide streak and serious mom issues, fired for drunkenness from his job as a mid-level executive in the oil business, was finishing his own debut, The Big Sleep (1939), with its comparatively uplifting cast of pornographers and nymphomaniacs. “Everything he touches,” Chandler fumed about Cain, “smells like a billy goat […] He’s every kind of writer I detest […] a Proust in greasy overalls […] the offal of literature."

Of all things, Cain wanted to sing opera. When that dream was frustrated, he got as far from it as he could, creatively and geographically; by the time he wrote Postman he was in Los Angeles, having fled his birth and breeding on the East Coast as son of the local college president (Cain even worked awhile as an editor for The New Yorker). Still just a euphemism for Hollywood, Los Angeles was Cain’s natural habitat more than he knew, teetering between the transcendent and the tawdry, swarming with the forsaken, disenchanted, and besotted, among them fugitives from Hitler’s coming holocaust. Centerless and gravityless, Los Angeles was the Elba of Entropy for exiles like Cain who, writing scripts within a martini’s throw of Faulkner and Fitzgerald, honed self-loathing into an aesthetic. When Hollywood’s interest turned from his scripts to his novels when it was supposed to be the other way around, the irony wasn’t lost on him. Cain had little use for the movies, both those he didn’t write and those he did, the best known of the latter being 1938’s Algiers with Hedy Lamarr; even as he hated himself for his earlier failures, he shared with rival Chandler the secret conviction that he was superior to his own work. "There’s no such thing as a good one," he said of films, to which Hollywood answered with nearly instant adaptations of three of his novels, Postman coming last, a decade and a half after publication. By then World War II was begun and finished, and America was discovering moral confusion in such Hollywood noirs as Out of the Past, Gilda, Detour, Criss Cross, In a Lonely Place, and the definitive Double Indemnity, based on Cain’s second novel. But while the moral conventions of the late 1940s finally allowed for the palpable chemistry of John Garfield and Lana Turner as Frank and Cora, the glorious depravity of ‘“Rip me!' [...] I shoved my hand in her blouse and jerked’ was still a non-starter.

Noir was to cinema as punk was to rock and roll. European refugees like Fritz Lang, Otto Preminger, Robert Siodmak, and Billy Wilder brought with them a worldview forged of equal parts German Expressionism and Nazi barbarity. In these movies, murder was a career move, double-cross a survival strategy, the bed an illicit cage. Proudly repellent in its nihilism, turning lack of production values into a virtue, noir began where other movies left off, or where they would have left off if they had taken that last wrong turn; there was no love, only obsession, which the lovers would choose over love anyway if they had a choice. A bracing denial of heroism provided noir’s visceral energy, every flicker of redemption more powerful for how fleeting it was; in the wake of the stupefying revelation of the concentration camps, and before the altar of atomization, the genre was distinguished by violence and wantonness in the face of obliteration. Soon the vision became fetishized to the point of cliché — wafting cigarette smoke, the glamour of the forlorn trumpet, the tango of shadow and light — but the exhilarating depths of Postman remained further than the movies were able to plummet until the early 1980s when, as Frank and Cora, Jack Nicholson and Jessica Lange had their way with each other on the kitchen table. It said everything about both the times and the novel that, almost half a century later, the flammable essence of the latter still eluded the former.

For a while in The Postman Always Rings Twice, Frank and Cora appear to have gotten away with murder. But they can’t get away from their own rot: "'God kissed us on the brow,'" she tells him toward the end. "'He gave us all that two people can ever have. And we just weren’t the kind that could have it […] God is up there laughing at us.'" To which Frank answers, "'Well we’re laughing at him too, aren’t we? He put up a red stop sign for us, and we went past it […] Then the devil went to bed with us, and believe you me, kid, he sleeps pretty good.'" One last time, Frank and Cora devour each other like before ("The devil got his money’s worth that night"), and for that single moment we get a glimpse of something we haven’t until then: like a lot of professed nihilists, Cain is a secret moralist after all, and rot and God are just other names for fate — the postman that rings again at the door of hell, not leaving till someone answers.

James M. Cain left Los Angeles in the late 1940s and his fiction was never the same. It wasn’t so much that he belonged in Los Angeles: the whole point of Los Angeles is not belonging there; it’s a city for people who don’t belong anywhere. Of course he had the same ambitions and delusions of any serious author, even as he chafed at comparisons to Hemingway while otherwise the canon lacked the nerve to comprehend let alone embrace him. Cain’s books continued to test the caprices and artificialities of civilized behavior as surely as Frank and Cora lay carnal siege to it, even when those books aspired, like Mildred Pierce (1941), to a more leisurely Depression-era updating of Thackeray-like social observation; in the time it takes Mildred’s husband to rake the leaves in the opening passage, Frank and Cora have met, had lunch, argued, and made first moves toward the frenzied sex that’s only paragraphs away. Foolishly Cain convinced himself — we did mention delusion, didn’t we? — that this would rescue him from that dark corner to which the canon’s keepers consigned him. But  Hollywood made a noir of Mildred anyway, seizing on her daughter Veda, the single most hideous offspring in modern literature, and sticking a gun in her hand, the smoke of murder coiling from the barrel. As much as Cain was out of place when he left Los Angeles, he was out of time, whereas not so long before, the times scrambled to keep up with him. It’s hard to know which is more incongruous about a later novel like Mignon (1962), the fact that it’s about the Civil War or that it was published the year the Beatles made their first record. In 1977 — the year of the Sex Pistols, whom he might have regarded as kindred spirits if not for the fact that they didn’t sound much like opera singers — James M. Cain vanished for good into American literature’s midnight, of which he was unchallenged master since the first fall of dusk.