As liberals fight for her "fiscal cliff" solution, a new poll shows Americans are open to it 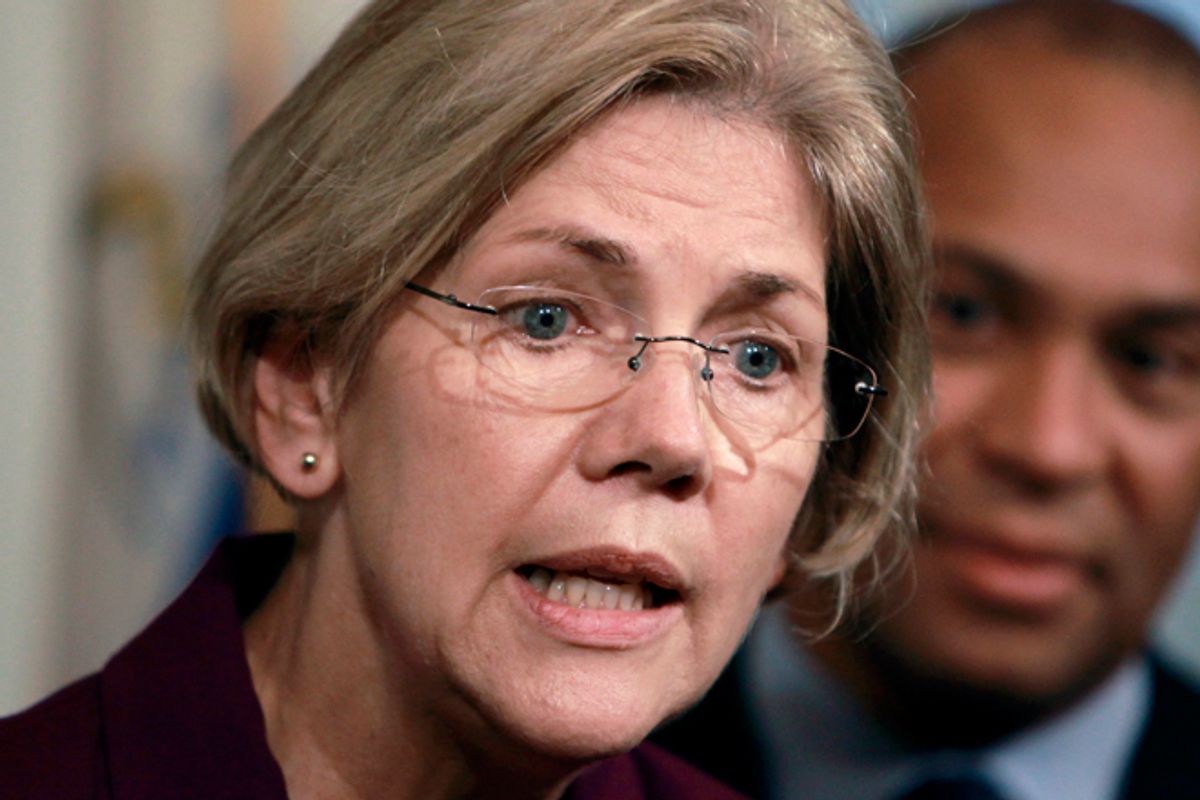 The progressive movement is feeling more confident than it has in years and is flexing its muscles in the fiscal cliff fight to put pressure on Democrats not to cave on the tax increases for the wealthy or on cuts to social safety net programs. So far, the Democratic establishment seems to have listened. President Obama, unlike in his negotiations with Republicans last year, is drawing a hard line on the tax hikes and is forcing Republicans to make the first move on entitlement reform.

And yesterday, progressives scored another huge victory with the confirmation that Massachusetts Sen.-elect Elizabeth Warren will get a spot on the Senate Banking Committee, where she can carry on the work that has made her a liberal hero in the fight to make Wall Street accountable.  Given Warren’s star power, the progressive activists who fuel her campaign see her as a leader in Washington whose influence extends far beyond her single vote in the Senate. Many are rallying around her vision of a “balanced approach” to reducing the deficit, which is notch or two to the left of Obama's.

Beyond tax increases for the wealthy, she has called for the elimination of many agriculture and oil subsidies, cuts to defense and an end to the war in Afghanistan (which costs about $2 billion a week) while leaving Medicare, Medicaid and Social Security untouched.

When Warren laid out the approach in a debate with departing Sen. Scott Brown during the campaign, it instantly entered the progressive canon. “If this is what Democrats define as a ‘balanced approach’ I'm all for it,” prominent liberal blogger Digby wrote of Warren’s vision. Soon, groups like Progressive Change Campaign Committee, a key outside group involved in Warren’s election, began using it in fundraising solicitations and other liberal candidates echoed the idea.

And the plan has widespread support beyond just liberals, progressives argue. Case in point, the PCCC polled voters in two swing states (Virginia and New Hampshire), and in Obama’s home state of Illinois, about Warren’s plan. The poll, conducted by PPP and shared with Salon before its release, didn’t mention Warren’s name, but asked about individual components. All had broad support.

Asked about “cutting spending on Social Security benefits,” voters in all three states opposed the idea in large numbers: 66 percent in Virginia, 74 percent in Illinois and 75 percent in New Hampshire. On Medicare, it was a similar story: 68 percent of Virginians opposed cuts, along with 73 percent of Illinoisans, and 74 percent of New Hampshirites. The numbers were slightly lower for Medicaid, but none below 59 percent in opposition to cuts.

Adam Green, the co-founder of the PCCC, said the poll shows Americans agree more with progressives on fiscal issues than even most Democrats probably realize. "Across the country, right-wing ideas are unpopular and voters support Elizabeth Warren's progressive version of a balanced approach ... The mandate is clear. The only question is whether Democratic leaders in Washington will have the courage to fight for the will of the people instead of unnecessarily cutting a bad deal that hurts middle-class families and working people," he said.