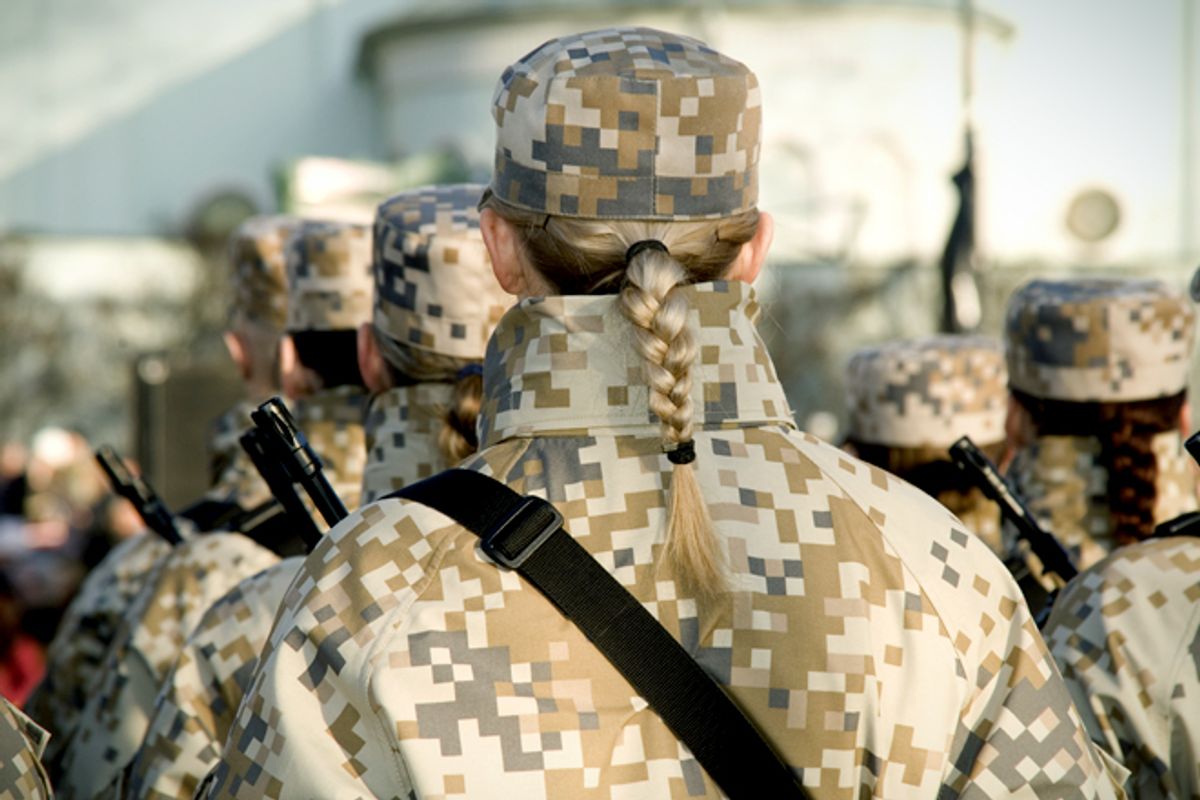 If there’s one thing this election taught us, it’s that fighting against abortion in the case of rape should be avoided at all costs. And yet, Republicans may come back for another serving of Todd Akin’s humble pie.

Right now, if you’re a woman in the military, which has startlingly high rates of sexual assault, and you get raped, you face the added insult of having to pay for an abortion out of your own pocket. That’s because the military's health insurance plan is the only one in the federal government that does not cover abortion in the case of rape or incest. It'll only cover the procedure if the woman's life is in danger

Democrats in the Senate have tried to change this, but House Republicans have so far resisted, thus producing two different bills -- one with the change and one without. Yesterday, the House named its representatives to a bicameral committee that will hammer out the differences between the two bills, including this provision. While killing the amendment could reignite the explosive abortion and rape debate of the summer, Republicans generally oppose the expansion of reproductive rights, even for raped female soldiers.

Sen. Jeanne Shaheen, the New Hampshire Democrat who authored the amendment to the National Defense Authorization Act, told Salon, "This is an issue of equity." Every other woman who gets federal health benefits, from civilian government employees, to Medicaid recipients, to federal prison inmates, gets abortion coverage in the case of rape. "It is only fair that the thousands of brave women in uniform fighting to protect our freedoms are treated the same. I have been encouraged by the bipartisan support this provision has received in the Senate thus far, and I urge the House and Senate conferees to continue that support,” Shaheen added.

The Senate passed Shaheen’s amendment 98-0, thanks in part to vocal support from Republican Sen. John McCain, even though nine conservatives on the Armed Services Committee initially opposed it. But House Republicans have been far less supportive. They did not include a similar provision in the House bill, and aides in the past have cast doubt on its prospects. “Historically, social provisions that are not reflected in both bills heading into conference don’t survive,” an unnamed GOP staffer told the Army Times in June. “Amendments like this have come up several times.”

Advocates hope a bruising election-year defeat on reproductive rights has chastened Republicans, but they’re not holding their breath. “We have seen so many negotiations around women’s reproductive organs this year that it’s really difficult for me to say with much clarity that they will err on the side of focusing on the other important items in the DoD bill and won’t get hung up on this small piece,” Democratic Rep. Gwen Moore, who co-authored the House version of Shaheen’s amendment and co-chairs the Women's Caucus, told Salon an interview.

“Having been around here and watched them from day one since the takeover of the majority in 2010, and having seen every single bill be headlined by their effort to control women’s reproductive health, I can’t be sure,” she added.

The Pentagon has supported the bill and this week, Colin Powell sent a letter with dozens of other retired military leaders urging that the final bill include Shaheen’s amendment. “The current policy is unfair and must be changed,” Powell and the other officers wrote to Congress. President Obama also strongly supports it.

However, Rep. Buck McKeon, the California Republican who heads the House Armed Services Committee, has publicly refused to take a position the amendment. Still, aides on Capitol Hill say they are cautiously optimistic that it will survive.

On top of risking their lives in combat, women in the military have to endure escalated rates of sexual assault and a broken enforcement system. There are more than 400,000 women in the armed services, making up about 20 percent of the force. In 2011 alone, there were over 3,000 reports of sexual assaults, though the real number is certainly far higher as officials estimate fewer than 15 percent of all assaults are actually reported. Last year, a Pentagon report estimated that only 6 percent of troops who commit rape will ever spend time in jail. It’s a huge problem whose story was recently told in the documentary “The Invisible War.”

Politically, it’s hard to think of a more sympathetic or important constituency than female soldiers. It’s also hard to imagine that after Todd Akin and Richard Mourdock, that Republicans would want to plunge back into the debate over rape and abortion that cost them so dearly just a few months ago. “They’re the ones who are supposed to be for the military, they’re the ones that are for the veterans, that’s the reputation they’ve always enjoyed,” Moore quipped.

Pro-life groups are reportedly biting their tongue on the Shaheen Amendment, willing to let it slide because they realize the political ramifications for opposing it would be disastrous.

Pro-choice groups, meanwhile, are ready to pounce. “Inclusion of the Shaheen amendment in the final bill should be a slam dunk,” Judy Waxman, the Vice President of Health and Reproductive Rights at the National Women's Law Center, told Salon. “If it is not present, the groups concerned about women's health will be watching, and we will know who to blame.”