The most unhinged reactions to the shooting

Conservatives are adamant about not "politicizing" the tragedy. Perhaps they should look at their Twitter feeds 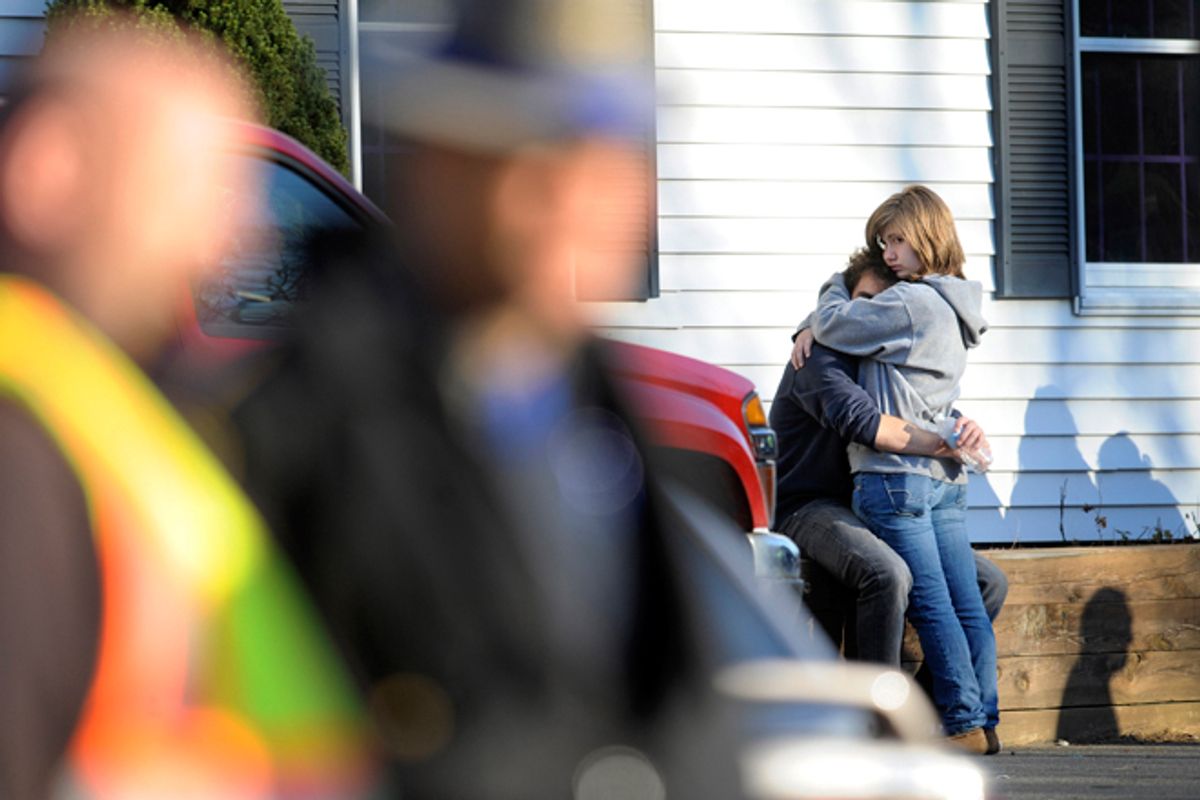 People embrace at a firehouse staging area for family around near the scene of a shooting at the Sandy Hook Elementary School in Newtown, Conn., Friday, Dec. 14, 2012. (AP Photo/Jessica Hill)
--

The fault lines were predictable and immediately apparent today in the debate that broke out in the wake of the tragic shooting in Newtown, Conn. Some said this horror exposed the fiasco of our current gun regime, while others demanded silence so as not to "politicize" the tragedy. But many conservatives went beyond calling for calm reflection and went on the attack. Most were respectful -- even Sarah Palin refrained from throwing bombs -- but others were more unhinged.

“I am disgusted by those who want to get into the politics of today's violence. Shame on Michael Moore & MSNBC,” tweeted former presidential candidate Herman Cain. Twitchy, the right-leaning Twitter aggregator founded by Michelle Malkin, pronounced the politicization “disgusting.” “Ignorant liberal celebrity vultures are swooping in to turn the tragedy into a gun control soapbox,” the site explained. Others were “ghoulish," the site added.

As Joan Walsh and many others have noted, now is exactly the time that we should be talking about guns, as it’s a question of how to prevent the next tragedy. And saying you can’t “politicize” a tragedy is in itself a form of politicizing it.

Evangelical radio host Bryan Fischer had a similar, if far loonier, message. “Here’s the bottom line -- God is not going to go where He is not wanted,” he said on his radio show today. “We kicked God out of our public school system. I think God would say to us, hey, I would be glad to protect your children, but you gotta invite me back into your world first. I’m not going to go where I’m not wanted. I am a gentleman... Back when we had prayer, the Bible and the Ten Commandments in schools, we did not need guns.”

When CNN host Piers Morgan tweeted several messages calling on President Obama to take action on gun control, conservatives flipped out. Breitbart.com attacked Morgan for trying to “score political points” and for “exploit[ing]” the tragedy. One "patriot" on Twitter even told him to “Rot in hell.”

The NRA’s Twitter account has gone silent, as we noted, as has that of Gun Owners of America, an even more conservative alternative.

But we’ll let conservative blogger Pat Dollard have the final word. He summarized Obama’s tearful, heartfelt and not at all political statements this afternoon thusly: “OBAMA FAKED TEARS RIGHT NOW TO BACK HIS SEIZING OF YOUR GUNS ‘WE WILL TAKE MEANINGFUL ACTION REGARDLESS OF POLITICS.’”

UPDATE: Former presidential candidate Mike Huckabee to endose Fischer's  point of view telling Fox News, "We ask why there's violence in our schools, but we've systematically removed God from our schools." He continued: "Should we be so surprised that schools would become a place of carnage?"