Who has the best smartphone?

Apple? Nokia? Samsung? Ask a fanboy, and step back as the sparks start to fly 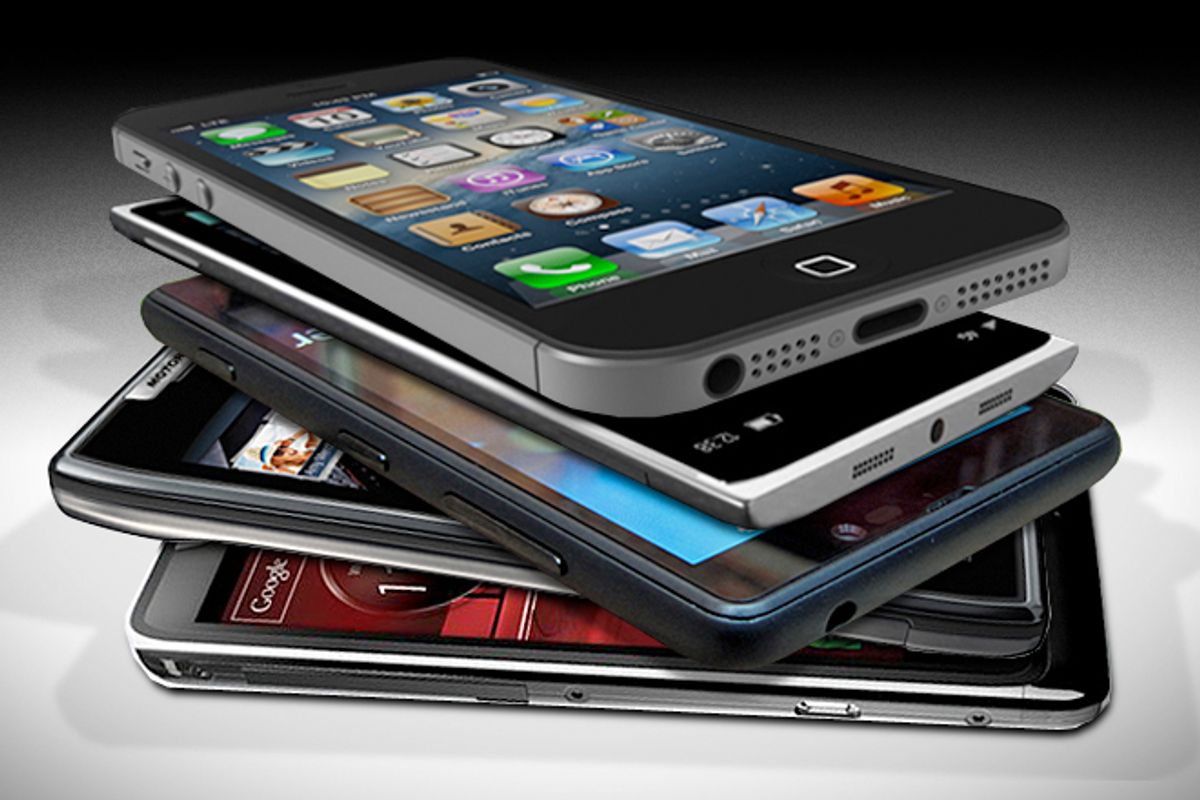 I was deep into the fifth page of the reader comments of the first installment of Ars Technica's excellent "The State of Smartphones in 2012," when I encountered this observation, which is simultaneously the most illuminating and worthless Internet comment of all time. It was a response to the declaration by Ars Technica's Andrew Cunningham that the "Live Tiles" user interface in the brand-spanking-new Windows Phone 8 operating system was more "aesthetically striking" than the icons of Apple's iOS or the widgets of Google's Android.

(With Live Tiles, the restless smartphone user can expand or shrink the on-screen real estate devoted to a particular app or function, providing a level of configurability alien to the straitlaced universe that iPhone lovers, in particular, are accustomed to. Remember this, for future reference: Windows: freedom! Apple: tyranny!)

The smartphone fanboys who surf on the waves of their own indignation at every locale on the Web where critics presume to judge the latest world-crushing smartphone took sharp issue with Cunningham's appraisal. Striking? Heavens no. Dull! Corporate! Too busy! And how could Cunningham have possibly failed to grasp that "Android has WIDGETS. They come in all sizes and are able to carry much more information -- i.e. are more useful -- than a tile could ever dream to be."

Do tiles dream? Have aspirations? If we do not click on them, do they bleed? If all aesthetic judgments are dismissed as subjective, does that make them worthless as a shopping guide? These are the kinds of questions you may find yourself pondering if, like me, you are foolhardy enough to plunge into the Internet depths where smartphone devotees make their cases for why their favored model of the moment  is the best smartphone ever.

There's a kookiness to the endless flame wars that accompany every review of every new model of phone that must be acknowledged. As Ars Technica concludes, "there's really never been a better time to buy a smartphone" than now. Everyone has a great phone. Consumers can't go wrong with any of the top offerings from Samsung or HTC or Apple or Nokia. There are differences, to be sure. If you want access to the most apps, go with Apple. If you're looking to integrate with the Windows Office ecosystem, try one of the new Windows 8 phones. If you like the most freedom and cutting-edge physical specs, you'll probably find it in the mad world of phones running from Android. But the truth is, they're all pretty great. And the answer to the question of which smartphone is the best ever is always the same: the next one coming down the pike, in just a few months.

So what I really wanted to know was why, in this age of incredible smartphone bounty, were fanboys so agitated and so passionate, so ready to take offense at the mildest-seeming slight to their favorite product. Powerful emotions associated with tech product fetishism have been with us since the earliest days of personal computing, but in the face of the current diversity of offerings, the relentless daily game of leapfrogging  technical specifications and app proliferation, it all seemed a little silly. Why aren't we constantly celebrating, instead of decrying, other phones?

Also, Apple follows Dieter Rams industrial design principles, while Lumia 920 follows Wirkkala's principles where the product should have a warm, organic, natural feel. And it achieves this, because of material and its form, it doesn't feel [like a] cold industrial product at all.

You know it's getting good when the Gesamtkunstwerk wannabes throw down against Functionalists in the reader comments. I won't say that when I started reading reviews comparing Nokia's Lumia 920 with Apple's iPhone 5 that I expected the commenters to contextualize the clash in a framework in which one phone (Nokia's) supposedly represented the instantiation of an ideal work of art while another was merely industrially efficient (Apple). But it's kind of neat. It shows that people care.

You may wonder how I fell down this rabbit hole. It can all be traced back to my temerity in trashing Nokia last week, when I used the news that the Finnish phone manufacturer was selling its own headquarters as a hook for an essay contemplating the cherry blossom-like evanescence of consumer technology world domination. I received some unkind tweets and emails questioning the worth and necessity of my existence on this planet. I'll be honest, I had no idea that Nokia inspired passions similar to those engendered when people say mean things about Apple on the Internet. So I investigated further and figured out that the ill feeling was probably a consequence of the fact that in my discussion of Nokia's misfortunes I had failed to make any mention of Nokia's all-chips-on-the-table smartphone, the Lumia 920, aka the best smartphone ever.

You may not have realized that Nokia can make such a boast. For one thing, in the U.S. Nokia smartphones tricked out with Microsoft's answer to iOS and Android, Windows Phone 8, have only just trickled into the marketplace. But there's no question, I discovered, that the Lumia 920 has been getting some great reviews. For sure, it's got killer specs. Its 8.7 megapixel camera (that's .7 megapixels more than the iPhone 5, for those keeping count at home) is considered splendid. Its screen resolution is higher than Apple's much-hyped Retina display (332 pixels per inch compared to the iPhone 5's paltry 326). And as one reviewer gushed, "Chunky it may be, but it is still a good fit in the hand, thanks to its butter-smooth curved edges. The screen joins to the case so snugly the phone is as pleasing to roll through your fingers as a worry stone. And the fact that it’s made of polycarbonate (that’s plastic to you and me) instead of glass or metal, means it’s more welcoming, even warmer, to the touch."

If you need to smoke a cigarette after reading that, you're excused. You're also excused if you roll your eyes at the spec-name dropping. Every top smartphone right now has a great camera and a great screen and great apps. Again, it's really hard to go wrong.

There go those critics again, with their damn aesthetic subjectivism. Wrath, sarcasm and derision ensued (all in response to a review that was celebrating the Lumia!).

One is tempted, here, to agree with the commenter who argued that if "the Lumia is too heavy [for you] it's time to hit the gym." The sheer quantity of online discussion devoted to arguments about the weight and height and width of competing smartphones -- and how they feel when they are nestled in the palm of your hand -- is mind-boggling when one considers how narrow the differences between them truly are.

But then again, if you are someone accustomed, as I am, to balancing your iPhone in your left hand, with your pinkie finger providing crucial stabilization support below the base of the phone, then you might consider 50 grams to be a make or break issue. The pinkie is not designed to be load-bearing. And modern weight rooms are surprisingly deficient in equipment that will help  maximize pinkie strength. When we're talking about devices that are rapidly becoming the single most essential consumer possession for billions of people, every gram probably does count. So, you know, chunky might not be so good.

Which gives us a big clue as to why emotions run so hot in smartphone fandom. Because little things make big differences. A gram here, a gram there, and suddenly, the fortunes of ancient empires rise and fall. The brutal truth of the current smartphone market is that even though there is a proliferation of competing devices, just two manufacturers, Apple and Samsung, account for the vast majority of smartphone marketshare and profits. With sales of PCs declining while sales of tablets and phones continue to surge, the future of today's technology companies is tethered to their ability to crack the smartphone market. Microsoft and Nokia are betting that Windows 8 will crack open the existing hegemony.

Windows 8 phones have only become available in the U.S. in the last couple of weeks, so it's far too soon to judge whether the Lumia 920 will be the kind of game-changing hit that turns existing market paradigms upside down. But think about it -- right now, millions of prospective smartphone buyers are cruising the Web looking for information to guide their holiday purchase. If that "chunky" accusation doesn't go unchallenged, doom could easily follow.

We're quite literally talking about 1mm and 50 grams here. No way I'll trade that for the ridiculous low-light performance of the camera (most photos you take are under less than ideal lighting), great video stability (make a huge difference), sensitive touch screen (there's a reason why capacitive-touch gloves are a market at all, cold fingers suck) and quality Nokia apps. Also: 32 GB vs 16 GB! The 32 GB allows me to throw most of my favorite music on my phone, download offline maps and still have room for photos and video and apps. The 16 GB on my iPhone 4 has always been a squeeze for me and the freedom the 32 GB offers is fantastic.

The freedom the 32GB offers! Sing it, brother.

But doesn't the iPhone 5 come with a 64GB model? Isn't that more, better freedom?