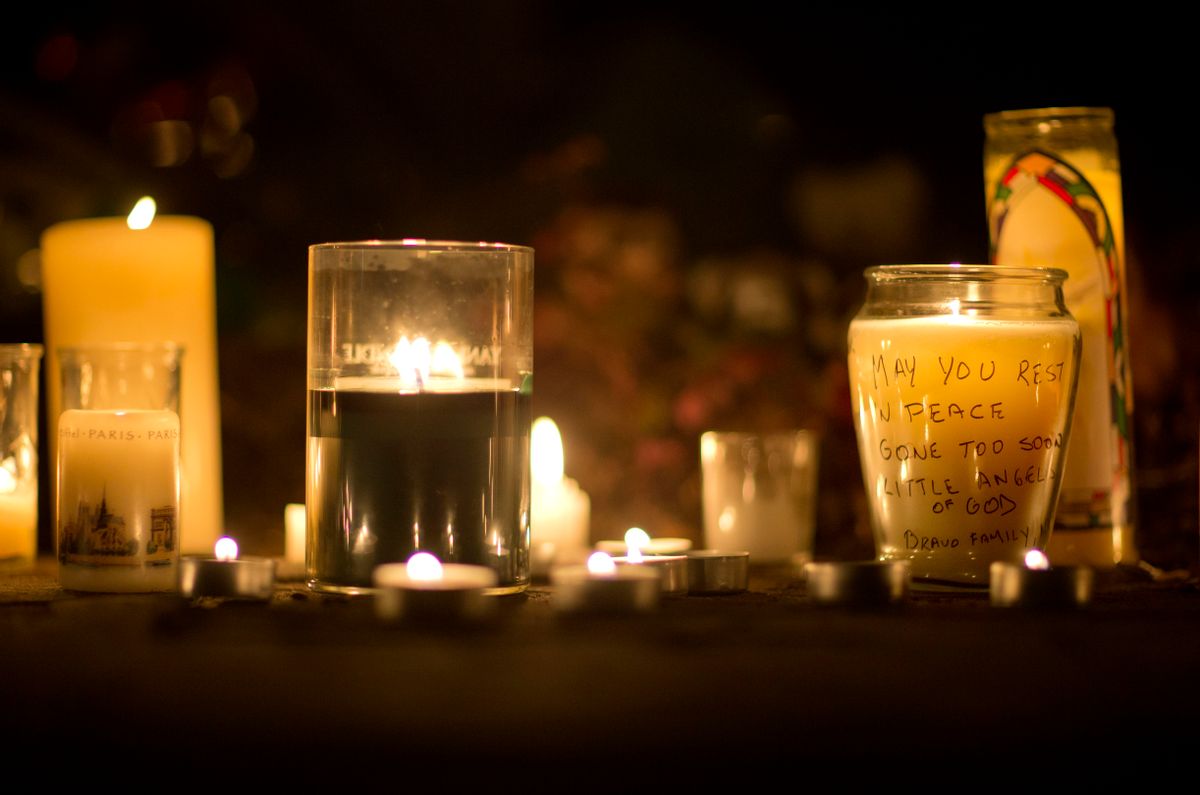 A message is seen on a candle outside the St. Rose of Lima Roman Catholic Church, Saturday, in Newtown, Conn. (AP/David Goldman)
--

NEWTOWN, Conn. (AP) — Twenty-six candles — one for each of the victims — flickered on the altar Friday as hundreds of grief-stricken residents gathered for a vigil in memory of the children and staff killed in a shooting rampage at a school in this Connecticut town.

With the church filled to capacity, hundreds spilled outside, holding hands in circles in the cold night air and saying prayers. Others sang "Silent Night" or huddled near the windows of St. Rose of Lima Roman Catholic church.

"Many of us today and in the coming days will rely on what we have been taught and what we believe, that there is faith for a reason," Gov. Dannel P. Malloy said at the vigil Mass.

The residents were gathered to mourn those whose lives were lost when a 20-year-old man killed his mother at their home, then descended on Sandy Hook Elementary School, opening fire as youngsters cowered in fear amid the sounds of gunshots and screams. Twenty children were among the 26 dead at the school.

Even though there were 26 candles on the altar, Monsignor Robert Weiss said it was important to remember everyone who died, including Lanza and his mother.

"Ours is not to judge or to question," he told reporters after the service. "But we are really holding in our hearts especially the children and the staff of the school."

"These 20 children were just beautiful, beautiful children," Weiss said. "These 20 children lit up this community better than all these Christmas lights we have. ... There are a lot brighter stars up there tonight because of these kids."

Weiss said he spent much of the day trying to console those who had lost a child or other family member, adding that he had no answers for their questions of how something so horrible could happen.

But through their sorrow, some parents found solace in remembering their loved ones, he said. One father whose son was killed recalled how his boy had made his first soccer goal this year.

Some parents said they struggled with mixed emotions after their own children survived the massacre that took so many young lives.

After receiving word of the shooting, Tracy Hoekenga said she was paralyzed with fear for her two boys, fourth-grader C.J. and second-grader Matthew.

"I couldn't breathe. It's indescribable. For a half an hour, 45 minutes, I had no idea if my kids were OK," she said.

Matthew said a teacher ordered him and other students to their cubbies, and a police officer came and told them to line up and close their eyes.

"They said there could be bad stuff. So we closed our eyes and we went out. When we opened our eyes, we saw a lot of broken glass and blood on the ground," he said.

David Connors, whose triplets attend the school, said his children were told to hide in a closet during the lockdown.

"My son said he did hear some gunshots, as many as 10," he said. "The questions are starting to come out: 'Are we safe? Is the bad guy gone?'"

At the vigil, Newtown High School freshman Claudia Morris, 14, said students had gathered in the school hallways after the massacre, asking each other, "Are you all right? Are you all right?"

"No one has answers to why this happened," she said. "It just seems so unreal."